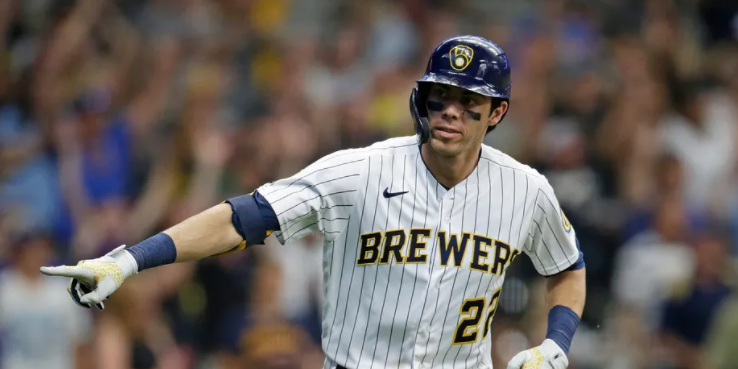 Christian Yelich propelled the Brewers to a 6-1 win over the Pirates on Monday by going 2-for-3 with a double, a grand slam, and a walk. Yelich broke the game open with his first home run of the year in the bottom of the fourth, snapping a nine-game homerless streak to begin the season. The four RBIs were also double his season total, although it hasn't been all bad for the former NL MVP. The double was his fourth of the year, and he's shown good plate discipline with an 8:12 BB/K ratio. For one day at least, Yelich looked like the player who was arguably the best hitter in baseball from 2018-19. Injuries have since derailed his career and zapped his power, but there's still hope that the 30-year-old can reclaim his status as one of the top players in the game. If his slow start continues, however, fantasy managers shouldn't hesitate to send him to the bench in favor of a more reliable bat.

Yordan Alvarez paced Houston's 8-3 win over the Angels on Monday by going 3-for-5 with two home runs, three runs, and four RBIs. Alvarez got the scoring started with a two-run shot in the bottom of the first, then belted another two-run bomb in the seventh to help put the game away. Monday marked Alvarez's first multi-homer game of the season, bumping him up to three dingers and six RBIs through five games this year. The 24-year-old already appears well on his way to another monster campaign after posting a .948 OPS over his first three seasons. With Alvarez locked into the middle of a potent Astros lineup, he's a terrific fantasy bat who can help in every category except for steals. The former AL Rookie of the Year remains a must-start in all fantasy formats.

Jorge Polanco powered the Twins to an 8-3 win over the Red Sox at Fenway Park on Monday, going 2-for-5 with a homer and four RBIs from the leadoff spot. Polanco took an aging Rich Hill deep in the third inning for a two-run shot -- his second home run of the year. He later added a two-run single to pad Minnesota's lead in the eighth, helping put the game out of reach. It's been a slow start for Polanco, who went just 2-for-32 during spring training and is hitting only .229 during the regular season. He's still managed to do a good amount of damage, however, with four of his eight hits going for extra bases, helping him drive in seven runs through 10 games. Fantasy managers are expecting big power numbers from the 28-year-old, who's coming off career highs of 33 homers and 98 RBIs last season. He's primarily batted third or fourth this year, so it remains to be seen if the move to leadoff was just a strategy to spark his bat. It seemed to work for one game at least, snappinga 2-for-16 skid at the plate.

Shane McClanahan settled for a no-decision despite allowing just two runs (one earned) on four hits and no walks with nine strikeout in six innings against the Cubs on Monday. McClanahan continued his strong beginning to 2022 with his best outing of the season yet, notching his first quality start of the year while increasing his strikeout total to 24 in just 15 innings. He was also more efficient with his pitches this time around, needing just 80 to get through six frames after failing to complete five innings in each of his last two outings. The 24-year-old sophomore also didn't walk anybody, which was a positive step for him after issuing five free passes over his first nine innings. McClanahan has already proven himself to be one of the best young pitchers in baseball, especially if he's able to fine-tune his command. He'll try to keep it up against the Red Sox at home during his next start.

Eric Lauer notched his first win of the season against the Pirates on Monday with six innings of one-run ball, yielding five hits and one walk while striking out five. Lauer had little trouble with Pittsburgh's scuffling lineup outside of allowing a fourth-inning inning solo shot, which was quickly negated by Christian Yelich's grand slam in the bottom of the frame. After struggling in his season debut, Lauer looked more like the breakout star who posted a 3.19 ERA and a 1.14 WHIP over 114 2/3 innings last year. Now 26, the southpaw appears to have put his early-career struggles behind him to emerge as one of the more underrated arms in fantasy. While it's easy to overlook Lauer given the level of pitching talent in Milwaukee, don't ignore his ability to help a fantasy rotation. He'll look to build off Monday's outing against the Phillies on the road this weekend.