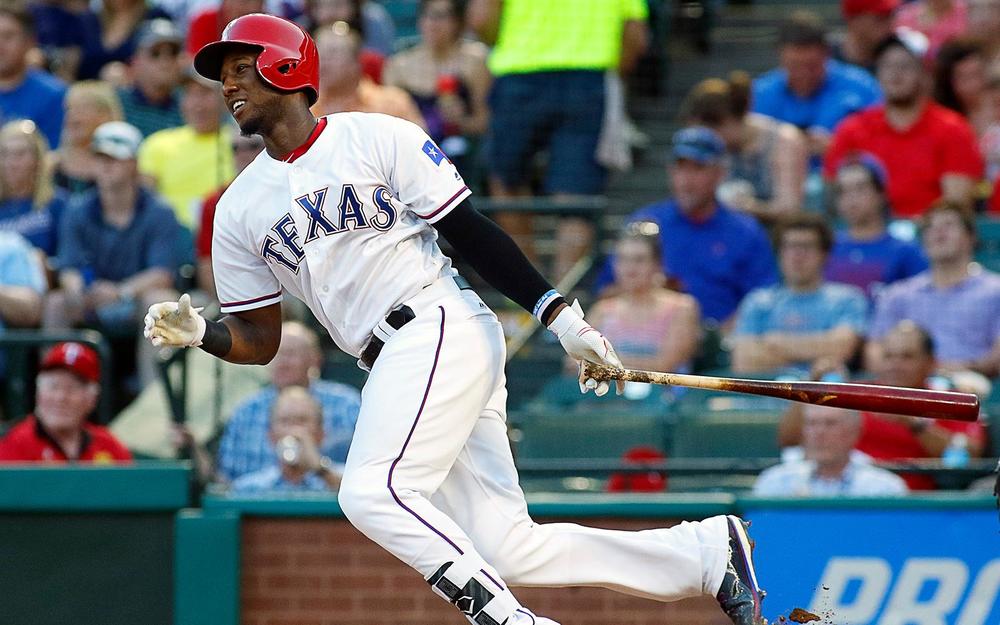 Jurickson Profar (2/O - SD) - Jurickson Profar, hitting cleanup for the Padres, hit his 5th homer of the season while walking twice on Wednesday against the Reds. 7 of Profar's last 8 hits have been for extra-bases as he is clearly changing his approach a bit, but at age 29 it's worth wondering what sort of ceiling is here? Profar was a hot prospect over a decade ago, hitting 12 HR and stealing 23 bases with a .286 AVG as an 18 yo in full-season A-ball (that's a reasonably big deal) and following it up with 14 HR and 16 SB with a .281 AVG at AA at 19 (an even bigger deal). From there the injuries and subpar performances began without getting that last step, so we he went 20/10 at age 25 with Texas in 2018, a lot of folks thought the breakout was at hand.....but it was not. He never really developed the strength to hit for consistent power to help him take advantage of his still quite good hit tool, and the speed was always more in the "good" range than anything really special. His best attribute may always have been his batting eye, which is why I thought the move to Oakland was inspired in 2019, but Oakland is where batted balls go to die so the AVG sucked, and his MO has become to go crazy pull-happy when things aren't going well it seems, so the AVG plummets further. Which brings us to here: He appears to have added some strength, perhaps due to some off-season workouts with Fernando Tatis Jr, and has gotten that EV up into the average range early here in 2022 along with a strong barrel rate in that small sample). The plate discipline is as good as ever, and the contact ability remains, along with some speed. There's a framework for a good player here still, especially with the multi-positional eligibility at 2B and OF from last season, but the pull% is problematic for any sort of helping batting average. Any sort of regression there should help considerably, but as it stands he looks like a moderate speed, moderate power, poor AVG sort of a player right now. The SD offense is good enough that if he's hitting in the middle of it, he's probably going to put up some solid numbers, making him a reasonable pickup once again in most formats. The ceiling isn't what it used to be, but there's a solid average player here with a touch of upside.

Taylor Ward (OF - LAA) - When someone like Joe Maddon bypasses a couple of highly-touted prospects in Jo Adell and Brandon Marsh to place a relative journeyman in the leadoff/everyday slot available in the OF, we should sit up and take notice, and Taylor Ward is indeed making everyone do that through the first few weeks of his 2022. Ward finished a single short of the cycle on Wednesday night, bringing his slash line up to 395/531/816 through his first 11 games. The 28 year old oft-injured OF has shown excellent plate discipline, walking 11 times in 11 games already and moving to the top of the order at times, and he's already hit 27 HR in 106 G at AAA and swiped double-digit bases twice so there's some power and speed here as well. The profile looks really intriguing, and the lack of significant swing-and-miss to go along with the well above average exit velo is certainly worth a pickup in all formats.

Jakob Junis (P - SF) - Jake Junis has served as the primary reliever for the Giants twice since getting called up, throwing 5 shutout innings with 3 hits and 4 K's against Washington, and then on Wednesday throwing 5 more shutout innings with 4 hits, 1 walk, and 6 K's against Oakland. He's allowed 6 singles, a double, and a walk in 10 shutout innings with 10 K's....it's enough for me to pick him up, knowing what's going on in SF right now. DeSclafani looks like he will be out a month, and while Junis has two starts you probably won't want him anywhere near (@LA, @COL), he also has a couple of home outings in there as well over the next 4. Pitching in that park is a huge benefit, and Junis definitely fits the bill of a player that will benefit from that environment and coaching staff: solid control, some issues with hard contact (often mitigated by park), can miss some bats. I love him to be a free piece to provide some value here over the next month, and if the schedule moves around a bit for him it could be even more than a little.

Alec Bohm (3B - PHI) - Bohm did not start much the first week or so of the season, but he's started the last 10 games now as his contact ability has risen to the fore. He went 2-4 on Wednesday to bring his slash line to 333/385/452 on the year, and in this age of massively lopsided BB:K ratios Bohm's sits at a comfortable 6:7 thus far. The exit velocity and hard hit rate are tremendous just as they were last year, and the launch angle continues to push upward. I feel like there is a lot to like here as we make the turn toward actual spring weather in Philly. He's a must-add for me in virtually all formats.

Jordan Montgomery (P - NYY) - Montgomery tossed his 3rd straight solid, albeit unspectacular, outing against a second-division offense on Wednesday, holding the O's to 2 runs on 4 hits over 5 2/3 innings, striking out 4 without walking a batter but hitting 2. Montgomery has gone through these last 3 opponents allowing just 10 hits and 3 runs over 16 2/3 innings with 4 walks and 11 K's, but his stuff just looks a bit diminished to me this year. The velo is down a touch, the K's are down a touch, and the command is off a touch. It's plenty to get through the Orioles and Tigers of the world normally, but with the Jays, Rangers, and White Sox next up, I'm a bit leery. I've downgraded him a touch in my personal rankings over the past month, as I'm just not comfortable with the downside risk here with the slightly diminished stuff I'm seeing.

Tweets by Fantistics
Anthony is in the Riz-zone - April 27th, 2022
Julio the Speed Demon