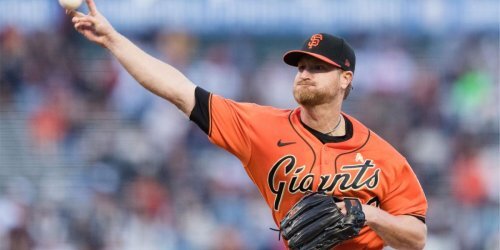 Alex Cobb (SP - SF) - Cobb bounced back from a rough outing in LA last week to toss a gem on Monday night: 7 IP, 6 H, 0 R, 0 BB, 7 K against the Braves. Cobb has really been fantastic this year, buoyed by a 2 mph increase in fastball velocity and a 61% GB rate. The home park helps as does the resurgence in control....he's really been the complete package this season. Cobb turns 35 right at the end of the season, but with another year on his contract in SF I'm absolutely going to be interested once again in 2023. Cobb is 7th in xFIP ERA among pitchers with at least 120 IP, and in 24 starts he's allowed more than 3 ER just twice: in Colorado and in LA against the Dodgers. He remains a very solid mid-rotation starter in my book as a top-40 SP.

Ryne Nelson (SP - ARI) - I was impressed but not completely sold by Ryne Nelson's debut, but consider me on the bandwagon after Monday's start against the Dodgers. Nelson allowed a single and a triple to the Dodgers over 6 shutout innings, walking 2 and fanning 6. The FB rate is a little bit worrisome, but there's little to quibble with otherwise: the swinging strike rate was excellent and he threw 4 quality pitches for strikes. Arizona is probably going to be a bit careful with him....they only allowed him to throw 81 pitches on Monday despite his being completely in control throughout, but as long as he's going to be allowed to stay in the rotation I am interested for his last 2-3 starts, and certainly looking forward to seeing him in 2023 right from the get-go.

Ryan McMahon (2B/3B - COL) - I know the raw numbers don't look great for McMahon this year, which seems to happen so often after a player signs a significant long-term deal. Still, I see quite a bit of promise here, and I think I'll be overweight on McMahon come spring. He's posting the best chase rate of his career in 2-22, and he's cut the swinging strike rate all the way to 10.9% from 14%. He's also hitting for more power as the season has progressed: his 2nd half slash line is 253/315/473 and the hard contact% has increased from 34.5% in the 1st half to 48% in the 2nd. The home/road splits have still been sizable, as they are for most Rockie hitters, but with his LD rate of nearly 25% and the EV of over 91, I feel like there's upside here in both AVG and power.

Mike Trout (OF - LAA) - Trout homered for the 7th straight game on Monday, giving him 35 for the season in just 100 games. Don't get me wrong, Mike Trout is still a phenomenal baseball player, but what we are seeing here is probably more indicative of the player that he will be going forward. High FB rate, BB rate is down, chase and swinging strike rates are up to career highs. All these things point to lower AVGs than we are used to from the future HOFer, and obviously all the base stealing went by the wayside years ago. The EVs are down a bit too, but he's compensating with the higher launch angle to continue to provide the massive power. He is still likely to be an excellent player for some time to come as long as his back can hold up (his defense has been better this year than it has in a few years), but for roto purposes I'm not sure he's going to be a top-5, or possibly even a top-10, player in the OF going forward. Likely still an OF1, but knowing how people are, he probably won't be on many of my teams because I expect him to be selected a bit early for my liking.

Bubba Thompson (OF - TEX) - Thompson was 1-7 in the doubleheader against the Marlins on Monday, but he stole a base in each game to give him 15 on the year and steals in 4 straight games. Thompson hits a ton of grounders, but he does have average power to go along with ridiculous speed (he's 64 for 68 in steals this year between AAA and MLB). The huge GB rate has allowed him to maintain a solid BABIP with his speed, but at age 24 there are a whole lot of ways this could go over the next few years. He has 15-20 HR power to go along with that 50 SB speed, so any reasonable AVG is going to make him a very valuable player for fantasy purposes....especially in that Texas offense. He needs to be owned in all roto-style formats right now, and probably in most other formats of any depth as well. There's just too much upside here to ignore, as raw as he is.

Tweets by Fantistics
Keller Could Be Late Bloomer- September 12, 2022
Young Starters and Hitters