Anthony A. Perri
The Masters of Inconsistency (Player Projections at Risk)

Last season we introduced Consistency Factor and it's implications to both Head to Head leagues as well as all Fantasy leagues regardless of their scoring setup.

We know what to expect from Brian Schneider on a year to year basis: basically lack luster fantasy output. However there are players such as Adrian Beltre, Brandon Inge, Khalil Greene, Johnny Estrada, Austin Kearns, Shawn Green, Gary Matthews Jr., Omar Vizquel, Vernon Wells, Bill Hall, Lyle Overbay, Jason Kendell, and Pedro Feliz who have posted solid fantasy production at different points in their careers. Expecting them to return to glory is the risk that we seek to avoid, especially on draft day.

Last season we pointed out 7 players who had a career or semi career season in 2006 and also have a poor 3 year record of consistency: Brandon Inge, Orlando Cabrera, Mark DeRosa, Yadier Molina, Pedro Feliz, AJ Pierzynski, Mike Lowell.  Of these only Mike Lowell, posted another favorable season.

An example of some of the players we do expect to increase production this year, based on their past consistency include, Ray Durham, Brian McCann, and Jason Bay.

I do want to point out that rookie players should be given leeway, as they are just getting their feet wet and do have the potential to become consistent hitters. In the next segment of this series, we'll cover the youth movement (specifically those who have shown to be remarkably consistent early on.) A factor that bodes remarkably well for those looking to find un-touted value come draft day.

Have a great day, 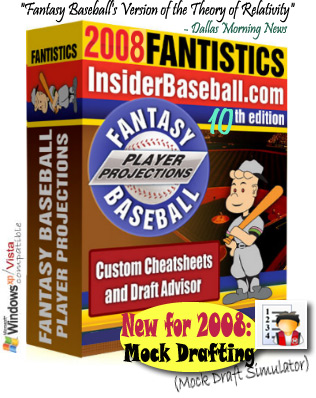 Overview of the 2008 Fantasy Package