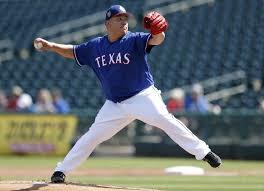 Sean Manaea (OAK) - Sean Manaea turned in another quality outing on Sunday and finished with a line of 7IP, 2H, 1ER, 2BB and 4K. Manaea has actually seen his velocity drop about 1 MPH across all of his pitches, but as a trade off, he's walking fewer batters and getting more groundballs. As a caller on our XM show pointed out Sunday morning, Manaea has mentioned that he loves throwing to catcher Jonathan Lucroy, who he credits with improved pitch selection and pitch framing. Manaea's breakout looks legit.

Teoscar Hernandez (TOR) - One of the hottest FAAB targets this week, Blue Jays prospect Teoscar Hernandez was called up this weekend and made his 2018 debut. Hernandez has solid future scout ratings of 55/speed and 55/power, although his hitting approach needs some work. Between the Blue Jays and Astros last year, Hernandez posted a 37.9% strikeout rate and 6.3% walk rate. His critics may have soured on him after his lackluster debut, but with a solid minor league track record of impactful speed and above average power contributions, there's reason for optimism with this player. He'll need to continue to hit, if he doesn't want to be sent back down after Donaldson returns, but he only has to be better than Randal Grichuk.

Ronald Guzman (TEX) - Rookie Ronald Guzman made his debut on Friday night, came back with a home run on Saturday, but was embarrassed by Justin Verlander during Sunday Night Baseball, who crowned him with the Golden Sombrero. He did bounce back with a double in extra innings, but Guzman is going to need to continue contributing if he wants regular at-bats. Guzman has a consensus 60 power rating by scouts, which is a big reason why the Rangers are willing to move Joey Gallo to the outfield to make room for the kid. He's worth a speculative add, if he's sitting on your waiver wire.

Jurickson Profar (TEX) - Jurickson Profar has been drawing the second spot in the batting order for the Rangers lately, a spot that should give him plenty of value moving forward. He's responded well to the change, but it's important to remember that Profar offers little in terms of power upside or speed. He's still just 25 years old, so there's still plenty of time for development, but for fantasy purposes, he's little more than simply a body to insert into your lineups without sacrificing too much in terms of batting average.

Justin Verlander (HOU) - Justin Verlander was excellent for the Astros on Sunday night, but he was surprisingly matched pitch-by-pitch by opposing pitcher Bartolo Colon. Verlander finished with a line of 8IP, 1H, 1ER, 1BB and 11K. Verlander has been incredible to begin the season, picking up right where he left off at the end of last season. He has 34 strikeouts and just 5 walks in 26.2 innings pitched.

Bartolo Colon (TEX) - Bartolo Colon was vintage (wait, is that a thing?) Bartolo Colon on Sunday night, taking a perfect game into the 8th inning and finishing with a line of 7.2IP, 1H, 1ER, 1BB and 7K. No need to chase this one, Colon isn't suddenly going to become mixed league relevant, but he was certainly feeling it last night. He had the Astros hitters completely baffled, possibly because they weren't used to how slow he was throwing.