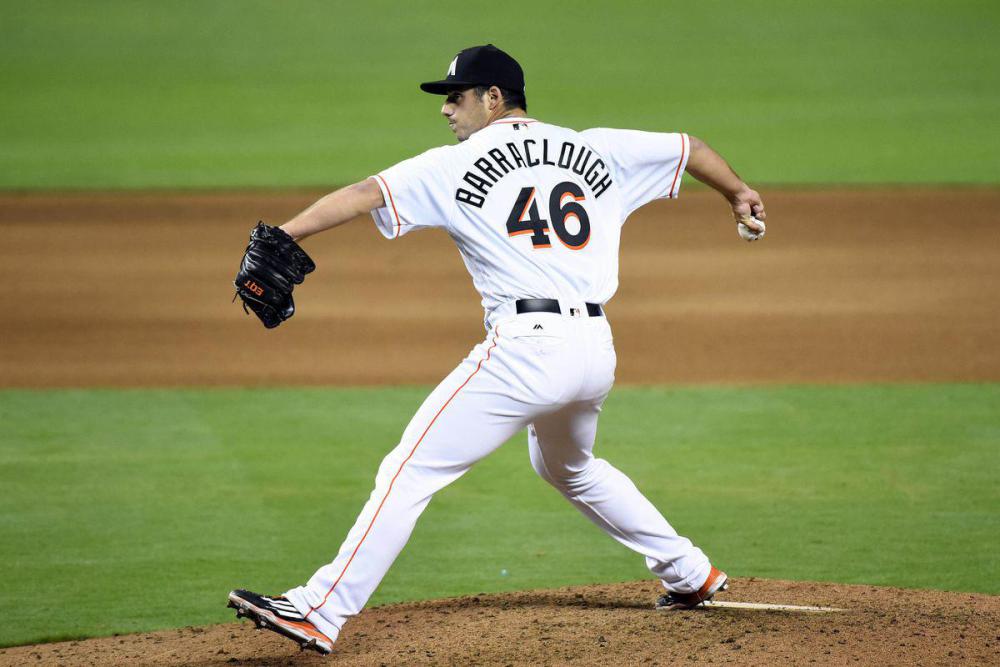 Happy June! If you've made it this far into the baseball season and you're still reading columns on closers, that's a positive sign! Things stayed hot on the closer front this week and it's looking like it'll stay that way for awhile.

-It took two months, but it looks like Brad Ziegler has finally been removed as the closer for the Miami Marlins. The news came on the heels of back-to-back losses taken by Ziegler, but in all actuality, he has been a mixed bag all month. While May did bring a solid 6 saves to his owners, it also came with 10 earned runs in just over 10 innings pitched on 17 hits and 4 walks. The question now becomes who will see the save opportunities in his place? Manager Don Mattingly told reporters after the game that Kyle Barraclough has earned the job and it's true, he's been utterly dominate over the last several weeks. For what it's worth, while Drew Steckenrider has shown bouts of inconsistency, including a stretch of four games from May 10th to May 20th where he allowed 11 earned runs in just over 3 innings pitched. He has righted the ship more recently, but it's tough to deny that Barraclough has been the far dominant reliever. Since it is the budget-conscious Marlins we're talking about, it is important to take contracts into consideration when we speculate on who may see saves. Neither Barraclough nor Steckenrider have reached their arbitration years yet, but it is worth mentioning that Barraclough will be eligible for the first time this coming off-season, while Steckenrider is still a couple years away. Adding saves to either of their resumes will absolutely raise their cost, but the question comes down to whether they want to incur that expense this year or wait another two years? My gut says it's Barraclough's job to lose, but grabbing Steckenrider is a smart move, as well.

-It was quite the roller coaster week for owners of Pirates' Felipe Vazquez, who complained of biceps soreness on Sunday, looked lights out against the Cubs on Tuesday and Wednesday and then completely melted down on Thursday. It was a questionable managerial move by Clint Hurdle to roll his closer out there for his third straight game just a few days after leaving with an issue in his arm. On Thursday, Vazquez was noticeably uncomfortable on the mound. So here we are, back to where we were on Sunday. Michael Feliz has been the team's primary set-up man, but he has also dealt with ineffectiveness recently, so that leaves Edgar Santana and former "handcuff of the week" Richard Rodriguez. For what it's worth, on Friday Santana got the call in the 9th inning with a 4-0 lead against St. Louis after 8 scoreless innings by Taillon. Was that a dress rehearsal for a real save opportunity or does Clint Hurdle have more magic up his sleeve. Rodriguez still has the best skillset in this bullpen, but he hasn't been used in many high leverage situations. Santana *appears* to have the leg up, but again, I like having Rodriguez's skillset on my roster, so I'd probably try to grab both, where possible.

-Alright, well, it's look like I completely misread the mind of Gabe Kapler (I don't think I am the first person to do that this year). Seranthony Dominguez notched his second save of his career on Thursday and now it looks like he's going to be the primary closer in Philly until he does something crazy like actually give up an earned run. That's right, the dude is a rookie and he still hasn't allowed an earned run (or any runs for the matter). In fact, he also hasn't walked anyone and has only allowed 2 hits over 11 outings and 13.2 innings pitched. Anthony has gradually improved his strikeout totals each of his six years in the minor leagues, but walks have always been an issue, which gives me pause when looking at the small sample from this year. Working in his favor is a high zone% paired with a very low 73% contact rate on pitches inside the strikezone. If you can throw strikes without batters making contact with them, that's an enticing skill to have and can help explain why his chase rate is rather low at 26.7% - he simply doesn't have to go outside of the zone that frequently right now so the sample is small. Before you go overboard, I must caution you that there aren't a whole lot of things working in his favor to support this break out, but stranger things have happened, so ride him while he has value. Just realize batters will adjust to him, they will learn how to hit his pitches inside the zone and then it'll be up to him to figure out how to disguise those pitches outside of the strikezone as enticing pitches to swing at. Otherwise, the walks will return and with it comes higher ratios and higher blown save potential.

-Mark Melancon is back with the Giants, but no one is really sure what his role is going to be. Strickland has been pretty good as the team's closer, but he has allowed runs in 2 of his last 4 appearances and has hardly been dominating. Look for Melancon to at least get a shot at closing out a game or two, but Strickland remains a must hold right now.

-Rasiel Iglesias is also back and looks like he isn't feeling any lingering effects of his injury. Last week's cover boy Jared Hughes can probably be safely dropped in most leagues. Side note: This 10-day disabled list is DEVASTATING to people's FAAB budgets.

-Edwin Diaz blew the save on Friday night after allowing a walk and a pair of singles. Diaz's stuff didn't quite look as unhittable as it normally does, but he still managed to strike out a pair. The outing comes on the heels of a meltdown on Tuesday where he allowed 3 hits, a walk and four earned runs to take a loss in a tie game. Alex Colome is scoreless through his first three outings for Seattle. Diaz owners might be wise to scoop Colome up, just in case Diaz is dealing with an undisclosed issue.

-Zach Britton started his rehab assignment earlier this week and managed to strikeout three hitters at High-A. After the game, he told The Baltimore Sun "I was pleasantly surprised today. Warming up in the bullpen, I was like, 'OK, I feel pretty close to what I would midseason.' Whether or not the velocity will come as I continue to go -- I don't know what I was at today, but I was throwing a lot harder than what I was in any of the [simulated] games. But I'd say I was pretty surprised with where my stuff was overall today. It was a lot further ahead than it would normally be traditionally in spring, for the first outing. This was more like a back-end-of-spring game where you're pretty close to starting the season." All in all, pretty good first appearance, but he still has a ways to go. Nonetheless, if he was dropped in your league, the price will only rise as his return inches closer over the next couple of weeks. He has an excellent shot at returning in time to be closer and shopped at the trade deadline by the Orioles.