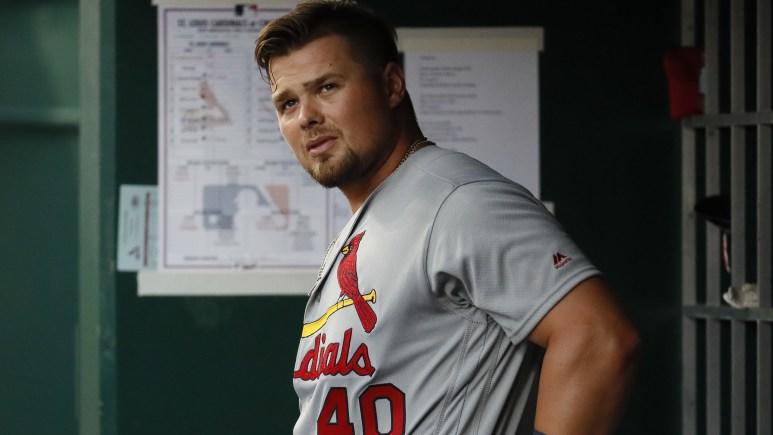 Luke Voit (1B-NYY) went 3-5 with a pair of two-run home runs against the Orioles on Friday. In limited playing time this season with the Cardinals and Yankees, Voit is batting .265 (9-34) with a three homers and nine RBI. 30% of his at-bats have ended in strikeouts, which is unusual for him. The 27 year-old's extensive minor league resume shows a guy with some power (he hit 19 homers in Double-A in 2016 and 17 dingers between Triple-A and the majors in 2017) and solid contact ability (he hit .297 in Double-A in 2016 and .327 in Triple-A in 2017), as well as a guy who walks a good bit (his walk rate was 9.5% and 9.4% in 2016 and 2017, respectively) and typically doesn't strike out a ton (15.2% strikeout rate in 2016 and 17.3% in 2017). This, combined with the fact that he calls Yankee Stadium his home, makes Voit an intriguing fantasy option. Although Greg Bird is the regular first baseman, Yankees manager Aaron Boone did indicate after Friday's game that Voit should see more at-bats in the near future.

Greg Allen (OF-CLE) stayed hot with a 1-3 effort at the plate against the Royals on Friday in which he stole a base and scored a run. Since he was recalled on August 9th, Allen is batting .360 (18-50) with a home run, six RBI, nine runs scored, and seven stolen bases (caught once). With a solid hit tool and plus speed (that he uses well on the basepaths), Allen is emerging as a viable fantasy option for those who could use some steals. Although one would like to see him walk more (he's logged just a 3.8% walk rate in 2018, with a 3.9% clip in August), he's slashed his strikeout rate to just 11.8% in August (down from 24% during the first half of the season) and has cut his soft contact from 30.4% in June and 20.5% in July to just 7.3% in August while maintaining solid hard-hit rates (34.2% in August, 37.8% overall) and is hitting lots of liners (27.5% in August) and capitalizing on his speed with a 47.5% groundball rate in the last two weeks. It remains to be seen if Allen can sustain anything near this level of production, but I think he's worth the add to see.

Yonder Alonso (1B-CLE) went 2-4 with a pair of home runs and three RBI against the Royals on Friday. He was scuffling mightily in August prior to this game, batting just .176 with a 27.5% strikeout rate, 5% walk rate, and .095 ISO. He did strike out in his other two at-bats on Friday, but his fantasy owners have to hope that this effort signals a turnaround. His hard-hit rate was down to just 20.4% in August after sitting above 40% in both June and July, although his flyball rate of 44.4% in August is higher than any other month. His production did nosedive last season after the All-Star break (.275 average, 20 homers, 43 RBI before, but just .254 average, eight homers, and 24 RBI afterward), so it's possible that history repeats itself and Alonso is a dud down the stretch in 2018.

Willy Adames (SS-TB) went 2-3 with a two-run homer, three runs scored, a walk, and a stolen base against the Red Sox on Friday. He's now batting .261 with eight homers, 22 RBI, and six stolen bases over 184 at-bats this season. He's really turned it on after hitting just .216 with three homers, nine RBI, and one stolen base prior to the All-Star break, as he is now batting .302 with five longballs, 13 RBI, and five stolen bases since. The 22 year-old seems to be settling into the majors nicely, as he's cut his strikeout rate to under 24% since the All-Star Break (it was 35.8% before) and is walking more often (10.5% since the break, 6.3% before) while boosting his OPS from a deplorable .604 before the break to .814 since. Oh, and he's raised his hard-hit rate to 39.1% since the All-Star break after logging just a 21.8% clip before it. If Adames is available in your league, he's definitely worth the add to see what he can do going forward.