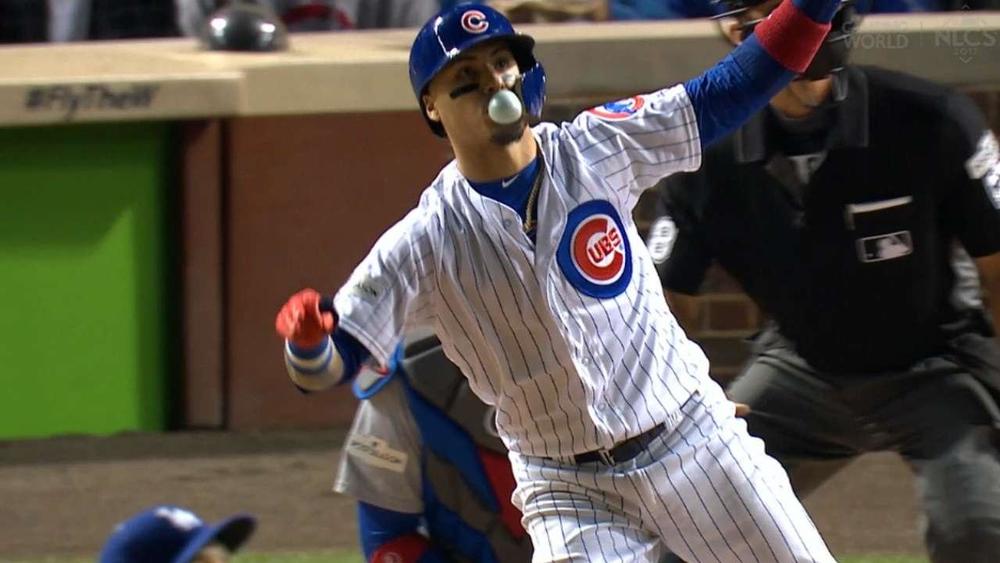 Baez broke out in a big way on Tuesday hitting three extra base hits, including his first two home runs of the year at Cincinnati. Baez finished the game 3 for 5 with three runs and three RBIs. Baez had only one extra base hit in 19 plate appearances entering the game, but two of his hits on Tuesday had an exit velocity over 105 miles per hour. We know he can hit fastballs. He has done that throughout his career, but it was promising to see his second home run came off a slider in the 9th inning. Baez has managed to hit for a decent batting average despite a sub-70% contact rate. If he ever develops enough patience to make contact 70 percent of the time, he will hit .300.

Kelly was simply fantastic on Tuesday, carrying a no-hitter into the 7th inning against Texas before allowing a solo home run to Rougned Odor. That was the only damage done as the 31 year old limited the Rangers to three hits and one walk with seven strikeouts in 7.2 innings. He was an aged rookie last year after spending four seasons in the KBO, and he finished the season strong with a 3.63 xFIP in September and October. On Tuesday he showed his full arsenal, generating 12 swinging strikes, six of which came off his changeup. That is notable because, although his changeup was the pitch thrown when Odor hit his home run, it was his weakest pitch last season. On Tuesday it was more palatable. Most importantly, he showed a willingness to use all pitches in all circumstances. That confidence could prove crucial in the Diamondbacks rotation. On another somewhat related note, the Rangers have scored six runs total in their first four games.

It feels like Myers is 40 years old, but he's still on the young side of 30, and he is still capable of providing some pop and speed in the Padres' suddenly potent lineup. He connected for his second home run of the season on Tuesday, finishing 2-4 with a pair of RBIs in San Diego's 5-3 win at San Francisco. He has battled injuries the past couple seasons and that has resulted in some issues at the plate, particularly a gnarly sub-70% contact rate in 2019. That was his only season, however, with a contact rate below 75 percent. So what's to say he doesn't rebound back to 75% and boost his average to .250 or .260 with the ability to hit for some power and steal some bases? Eight years into his major league career Myers still suffers from post-prospect hype bias. People hate him because he never lived up to his lofty expectations. And let's be clear. He never will, but he can still give you some meaningful production especially in roto leagues with daily lineup changes.

Mahle's season debut was mediocre at best. He gave up six hits and a walk while striking out four in four innings. Last year Mahle's surface statistics were abysmal (3-12, 5.14 ERA). However, his xFIP was 3.99 in conjunction with a low strand rate of 66.7%. He was battered with a HR/FB rate over 20%. It wasn't the long ball that bit Mahle on Tuesday. In fact, the first trouble came when Jason Kipnis opened the 3rd inning with a triple that Shogo Akiyama lost in the sun, eventually scoring on a Nico Hoerner single. Once again, bad luck for the 25-year-old righty. While Mahle's numbers lag, he actually improved in the peripheral stats each year of his career. Some pitchers face bad luck. Sometimes that costs them a job, which could happen to Mahle when Anthony DeSclafani returns from injury. Still only 25 though, there is still room for Mahle to develop into a reliable starter.

Last year's lefty/righty splits were pronounced for Goldschmidt. His numbers vs. southpaws were monumental (.298 ISO, 148 wRC+). Interestingly, he was specifically dynamite against lefties on the road (1.011 OPS). He has a home run and a 1.085 OPS in 19 plate appearances against Tuesday's opposing starter, Rich Hill. He appears to be seeing the ball well in 2020 (only 17.6% K rate) and comes into the DFS slate as the 11th most expensive first baseman in a game that could turn into a high-scoring affair.