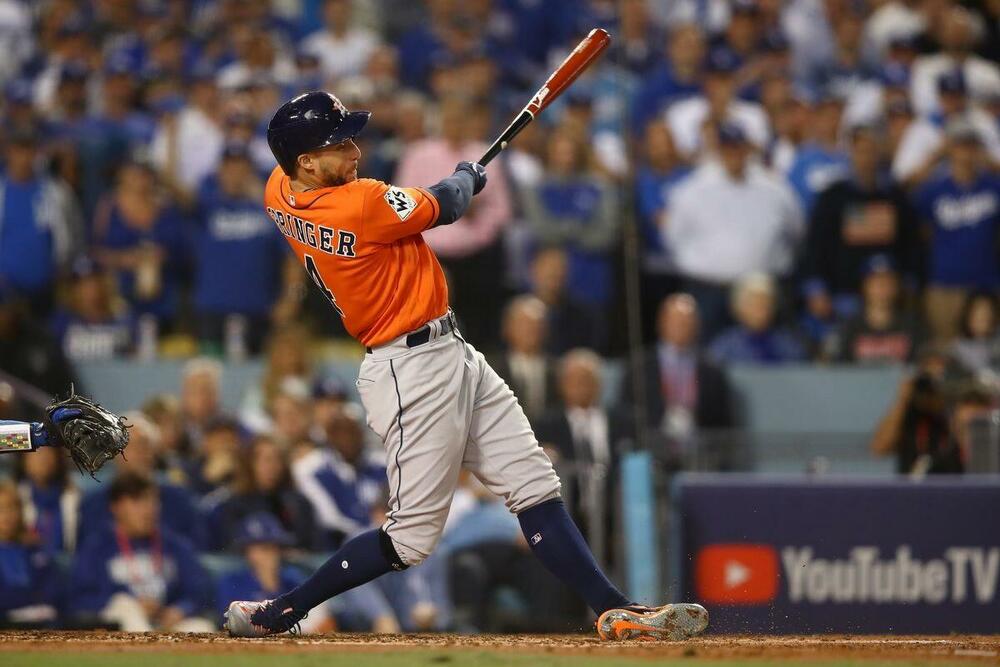 Jose Ramirez went 2-for-4 with a pair of two-run homers on Sunday to pace Cleveland's 7-4 win over Detroit. Ramirez enjoyed his fourth multi-homer game of the year and second in his last four games as he continues to surge towards the finish line. Of his 15 homers this year, eight have come in September -- a month in which he's batting .367. With a .942 OPS on the season, Ramirez is back to his MVP-caliber form from 2017 and 2018 -- when he posted a combined .948 OPS -- before his performance sagged in 2019 (.806 OPS). With 39 runs, 38 RBIs, and 10 steals in 51 games, Ramirez has been a five-category stud in fantasy leagues this year and will be worthy of a top draft pick in 2021.

George Springer went 3-for-4 with two solo homers and a stolen base against the D-backs on Sunday. Springer single-handedly got Houston back in the game, bringing them back from a 2-0 deficit with homers in the sixth and seventh innings to tie the game. He also added a single and his first stolen base of the year, raising his average to .253 in the process. While his overall numbers are still a step down from his tremendous 2019, the Astros leadoff man is putting together an excellent September with eight homers and 20 runs in 20 games. The 31-year-old remains a strong fantasy outfielder given his power and counting stats from batting atop Houston's potent offense, making him a dependable option as the season draws to a close.

Carlos Carrasco earned the win on Sunday with seven one-hit innings against the Tigers, walking three while striking out 11. Carrasco carved up Detroit's hitters en route to notching a new season-high in strikeouts, reaching double digits for the first time since his season debut on July 26. His 109 pitches (71 strikes) were a season high, while the seven frames matched his longest outing of the season. Carrasco is finishing the season strong after a brief speed bump in mid-August, as he's now reeled off five straight quality starts while posting a 1.41 ERA over that span. Now 3-4 with a 2.90 ERA and a 10.7 K/9 rate, Carrasco will look to have another dominant outing when he faces the lowly Pirates in his final start of the season.

John Means earned the win in a tightly contested affair with the Rays on Sunday, allowing just one run on three hits and no walks with 12 strikeouts over 5 2/3 innings in Baltimore's 2-1 victory. The 12 K's were by far a career high for Means, who hadn't fanned more than five in an outing this year and whose previous best was seven. They were likely an anamoly as well, as he entered Sunday with a 5.9 K/9 rate this year and a 6.9 K/9 rate for his career. The third-year southpaw is finishing the season strong after a slow start, yielding just one earned run in each of his last three starts to lower his ERA to 5.02. He now owns a strong 33:6 K/BB ratio through 37 2/3 innings this year, and he'll look to finish the season on a high note against the Blue Jays in his next start.

Luke Voit went 1-for-3 with a solo homer against the Red Sox on Sunday, extending his AL-leading HR total to 21. The game was well out of hand by the time Voit went yard in the ninth to make the score 10-2, Boston, extending his hitting streak to six games and giving him eight long balls in September. After a prolific summer that saw Voit emerge as New York's top slugger, he has remained a top run producer throughout September with 23 RBIs in 20 games. With a .286 average and 1.002 OPS this year, Voit has been a great all-around hitter as well despite striking out 49 times in 49 games. Voit seems dialed in at the plate right now, so look for him to have a strong final week to wrap up the regular season.