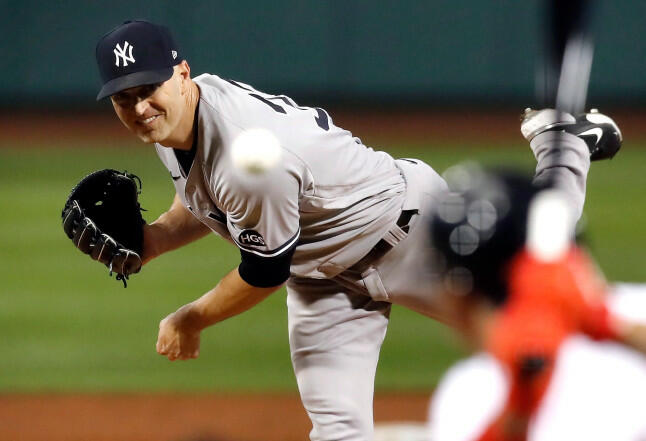 JA Happ, New York Yankees - J.A. Happ tossed eight shutout innings to pick up his second win of the season. Happ has been outstanding for the Yankees outside of his first two starts with a 25% K% and a 32% hard hit rate, and three of those five starts have been quality starts. He's been striking out more batters lately with at least a strikeout per inning in all three starts, and he posted 10 strikeouts against the Blue Jays on September 8th and nine Red Sox tonight. Keep riding the hot hand as he gets one more start next week.

Justin Verlander, Houston Astros - Justin Verlander announced on Instagram Saturday that he was going to undergo Tommy John surgery to fix the injury issue in his elbow that has bothered him this year. Verlander was closing in on returning to the team, so it's safe to assume that something went awry in one of his last pitching outings that caused the issue. Unfortunately, with it coming this late in the calendar year he'll also miss all of 2021 but should be ready to go for 2022 spring training. He also is a free agent that offseason so the next time we see Verlander in a big league game could be with a completely different team.

Jake Lamb, Oakland A's - Well Jake Lamb got out of Arizona and apparently has found some new life in Oakland as entering Saturday he was hitting .400 with a homer, and he launched his second homer of the season on Saturday in a 1-for-4 effort. Lamb has been getting run at DH and most recently third base as the team attempts to fill the void that Matt Chapman left after he was placed on the IL after needing hip surgery. We've seen runs from Lamb in the past, including 2016 and 2017 where he hit 59 homers across those two seasons, but he hasn't hit over .222 since and his highest wRC+ is an 80. With only a week left in the season he may be worth just riding the hot hand.

Tim Anderson, Chicago White Sox - Tim Anderson went 2-for-5 at the plate on Saturday with both of his hits leaving the yard. Anderson is following up his breakout 2019 in fantastic fashion with a .368/.403/.615 slash line and 10 homers, and he's even chipped in five stolen bases. His barrel rate has jumped up by just under 5% and he's cut his strikeout rate for the fifth straight season from a 27.1% rate as a rookie down to just 19% this season. His xBA is in the top 5% of the league for the second straight season and this year it's at a ridiculous .321. The icing on the cake is his walk rate has even jumped up a little bit too with is creeping up to 5%, which isn't much but it still helps.

Victor Reyes, Detroit Tigers - Victor Reyes continues to be excellent at the plate with a 2-for-4 performance on Saturday. He's hitting .290 for the season and has four homers to go along with seven stolen bases. The only real issues for Reyes is that he doesn't barrel many balls, but that's also just due to the fact he runs only a 18% fly ball rate. His xBA of .295 shows that his profile is right in line with the average, and his hard-hit rate is still excellent at 43%. Considering it's the Tigers, he could be a real value depending on where he lands in drafts going into 2021 if he remains in the leadoff spot for the team next season.