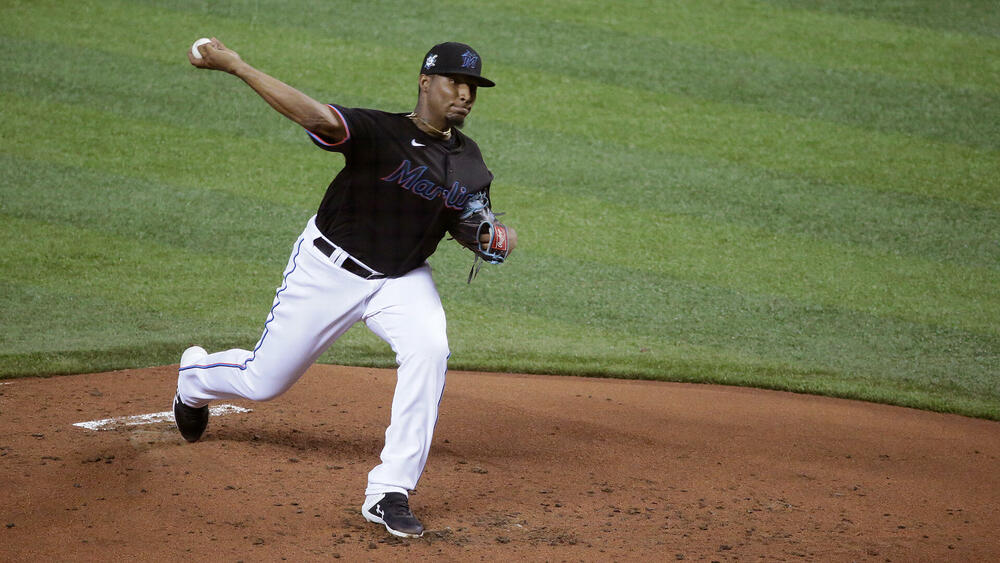 Max Scherzer lost after allowing a season-high six runs on nine hits (two homers) and two walks with 10 strikeouts in 5 1/3 innings against the Braves on Sunday. Scherzer notched double digit strikeouts for the fifth time in 10 starts this year, but his start unraveled in the sixth inning when he allowed a pair of two-run homers. He also threw a whopping 119 pitches -- seven more than his previous season high. The three-time Cy Young winner has been frustratingly inconsistent from a fantasy standpoint this year, allowing four earned runs or more in four separate starts, resulting in a 4.04 ERA despite five starts where he allowed one earned run or less. He's still dominating hitters with a 12.8 K/9 rate (nearly identical to last year's 12.7 K/9 rate), but he's also been more hittable than ever with a 9.5 H/9 rate -- well above his career 7.4 H/9 rate -- although a high BABIP (.358 prior to Sunday) is to blame for that as well. His 1.3 HR/9 rate would also rank among the worst of his career if he doesn't bring it down, so he just hasn't been as sharp this year as he usually is. Now 36, Scherzer may be entering his decline phase, although he's still good enough to be worth starting in fantasy whenever he's on the mound. He'll look to bounce back against the Marlins in Miami in his next start.

Adam Duvall took Max Scherzer deep on Sunday, going 1-for-4 with a two-run homer against the Nationals. Duvall continued his torrid run at the plate with his sixth-inning shot off Scherzer -- his 10th homer in his last 14 games and his 14th overall on the year. Duvall has emerged as one of the hottest hitters in baseball over the past couple weeks, quickly becoming a must-add in all fantasy formats after a relatively slow start to the year. While his high strikeout rate (27.9 percent) and poor plate discipline (5.8 BB%) make him a streaky, boom-or-bust hitter, his .261 average is more than acceptable given his power contributions. Fantasy owners should continue to ride him while he's hot, but don't be surprised if he suddenly goes cold over the season's final weeks, either.

Sixto Sanchez continued his strong start to his MLB career with another win on Sunday, allowing just one run on three hits and three walks with four strikeouts over seven strong innings against the Phillies. Sanchez needed only 90 pitches to get through the shortened seven-inning game despite issuing a season-high three free passes, throwing 59 for strikes as he carved up Philadelphia's lineup. The 22-year-old righty phenom has quickly established himself as one of the top rookies in baseball while making an immediate impact for fantasy owners. He's now 3-1 with a 1.69 ERA and a 29:5 K/BB ratio in 32 innings. Sanchez has also strung together four straight quality starts while allowing just six earned runs over his first five starts. He'll look to maintain his hot start against the slumping Nationals in his next scheduled start.

Alec Mills was the surprising author of a no-hitter on Sunday, yielding just three walks in a complete-game shutout of the Brewers. Mills, who was coming off six scoreless innings in his previous start, shut down Christian Yelich and co., making history over the span of 114 pitches (74 strikes) in only his 15th career start. The 28-year-old has been hard to trust from a fantasy perspective this year, however, as he had a 7.66 ERA over a five-start stretch and owns a pedestrian 37:17 K/BB ratio over 52 2/3 innings. He's also allowed 1.4 HR/9, making him more of a matchups play than a must-start option in fantasy. Mills is slated to face the Twins at home in his next start.

Eugenio Suarez went 3-for-5 with a double, a homer and two RBIs to pace Cincinnati's 10-5 win over St. Louis on Sunday. Suarez had fallen into another slump since his three-homer game last weekend, going 2-for-22 with nine strikeouts over his previous six games. It's been that kind of year for Suarez, who hasn't been able to get himself untracked and entered Sunday's game with a .199 batting average -- well below his career .262 mark. He's still having a good season power-wise with 13 homers and 30 RBIs in 46 games, but a .196 BABIP prior to Sunday has dragged down his batting line. His quality of contact has gone way down, however, as his line drive rate has tumbled from 24.6 percent two years ago to 18.4 percent this year, while his hard-hit rate has fallen from 46.7 percent last year to 33.0 percent this year. Suarez should still be close to his prime years at 29 and is coming off a 49-homer season, so fantasy owners probably shouldn't write him off just yet. His 2020 may have dampened his fantasy prospects somewhat, but he could be a good rebound candidate for 2021.