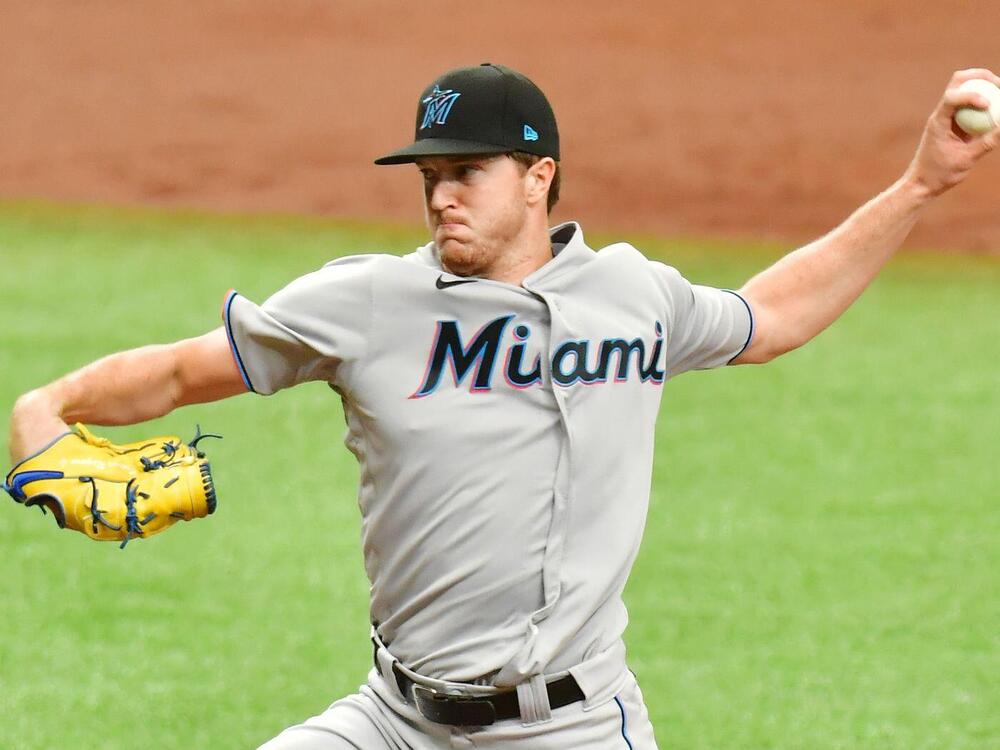 Trevor Rogers (SP-MIA) stifled the Mets on Saturday, as he tossed 6 innings of scoreless ball in which he scattered just 3 hits and 2 walks while racking up 10 punchouts. Rogers threw 56 of his 82 pitches for strikes in the contest. The 23 year-old southpaw's first outing of the season was a mixed bag, as he gave up 2 earned runs on 2 hits and 4 walks while striking out 6 over just 4 innings of work. But he showed his potential on Saturday, as he worked more efficiently and kept Mets hitters off balance with his combination of a mid-90s heater, high-80s changeup, and mid-80s slider. Rogers has yet to allow a single homer on the campaign, and so his 0% HR/FB (and his 5.4 BB/9) is the main reason his xFIP sits at 3.14 while his ERA checks in at just 1.80 after his first two starts. He lines up for a tough matchup on the road at Atlanta next week, but it will be difficult for fantasy owners to sit him after this performance.

Jacob deGrom (SP-NYM) was - aside from one mistake - brilliant against the Marlins on Saturday, as he tossed 8 innings of 1-run ball in which he scattered 5 hits, walked none, and piled up 14 strikeouts. The lone blemish on the outing came when Jazz Chisholm, Jr. crushed a high 100-mile heater into the right-field seats. Efficient as usual, deGrom tossed 76 of his 95 pitches for strikes. It's the same old so far for deGrom this season, as he owns a 0.64 ERA, 13.5 K/9, and 1.3 BB/9 through his first 2 starts (14 innings). His average fastball velocity is the highest it has been in his career (a shade over 99mph) and his 2.19 xFIP points to a 100% strand rate suppressing his ERA a bit, although that's still a really nice figure. The concern with deGrom, as it always seems to be, is whether he will get enough run support to earn wins. And as has often been the case in the past, his team gave him zero support as he spun a gem on Saturday. He lines up for a start at home against the Phillies next week and of course you are running him out there if you own him.

Jazz Chisholm, Jr. (2B-MIA) went 1-3 with a walk and a solo homer - his first in the majors - against Jacob deGrom and the Mets on Saturday. The 23 year-old had been scuffling out of the gate in 2021, as he was batting just .176 with 2 runs scored, 1 RBI, and 2 stolen bases through his first 22 PA entering Saturday's action. The underlying metrics indicate that Chisholm was pretty unlucky, as his 27% strikeout rate was actually a bit low compared to the clips he recorded throughout his minor-league career (and lower than the 31% he logged in a cup of coffee last season) and Statcast shows a 42% hard-hit rate for him entering Saturday's game. Given that, Chisholm's .250 BABIP was definitely on the unlucky side given his speed and 58% combined liner and grounder rate. There certainly remain concerns about his ability to make consistent contact, but the combination of power and speed is tantalizing.

Christian Yelich (OF-MIL) went 2-3 with 2 walks, 3 runs scored, and a stolen base against the Cardinals on Saturday. The 29 year-old seems to be rebounding some from an uncharacteristic 2020 campaign in which he hit just .205 with 12 homers, 22 RBI, 39 runs scored, and 4 stolen bases across 247 plate appearances. He's now batting .321 with a double, 7 runs scored, an RBI, and 2 stolen bases through his first 35 plate appearances of the 2021 campaign. Sure, the power has yet to show up, but given his track record since 2018, it seems highly likely that he begins hitting bombs as the weather warms up. Uncharacteristically, though, Yelich owns a 34% strikeout rate so far this year (21% career) and per Statcast his hard-hit rate is still solid (46%), if a touch on the low side (48-56% each year over the last 3 seasons). His 19% swinging-strike rate is nearly identical to last year's figure while his contact rate currently sits at a career-worst 63%. Ultimately, Yelich is an established superstar and there is therefore reason to believe that some of these concerning peripherals will not correct over the coming weeks.

Paul DeJong (SS-STL) continued his early-season struggles against the Brewers on Saturday, as he went 0-4 and fanned 3 times. The 27-year old is now batting just .107 with 2 homers, 4 RBI, and 6 runs scored through his first 34 plate appearances of the 2021 campaign. This comes after he was a virtual non-factor in fantasy in 2020, as he hit .250 with just 3 dingers and 25 RBI through 174 plate appearances. So far in 2021, his strikeout rate sits high at 35% while he's logged just a 27% hard-hit rate per Statcast. Only 7% of his batted balls have been of the line-drive variety while his flyball rate sits at a high 53% (44% career). So, when he's put the bat on the ball, he's a bunch of easy flyball outs. DeJong's swinging-strike rate is currently the same as last year's 15% clip while his contact rate is only 1% higher at 71% (75% career). So, on the surface his .071 BABIP screams that there will be correction to the mean in the average department - and there surely will be some - but his batted ball profile is a mess so far and he's fanning a lot. I would be ready to explore other options soon if he's on your fantasy squad.