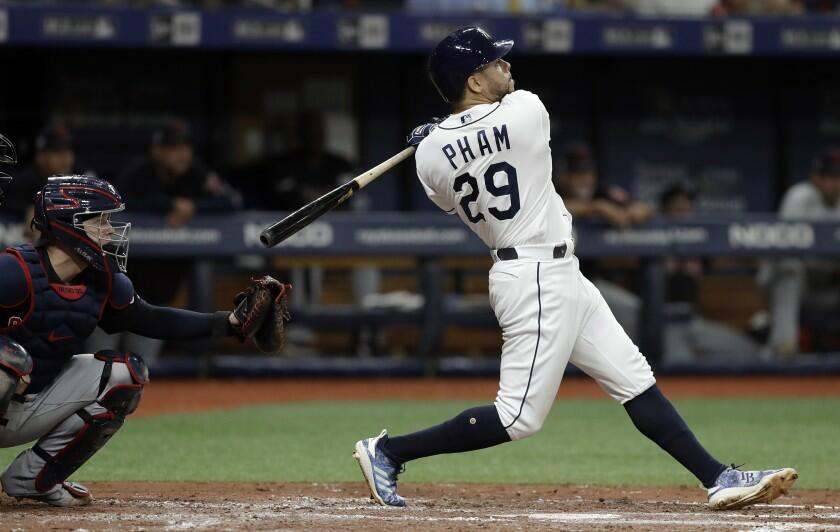 Pham went 2-5 with a double and a run scored against the Brewers on Thursday. Don't look now, but Pham is starting to do things again out of the leadoff spot for the Padres. Over his last 12 games, he is hitting just .256, but that has come with a .420 OBP, 5 XBH's 2 HR's, 11 runs, 7 RBI, and 3 SB's. Contrast that with his first 36 games in which he hit .186 with no HR's, 6 RBI, and 7 runs scored. This is more like the Pham we have become accustomed to - someone who can fill the stat sheet in nearly every category. From 2017-19, he averaged 22 HR's, 22 SB's, and 91 runs, and hit at least .273 each year. His metrics are not that different than then, as his 21.4% K% remains very acceptable, and his 90.2 EV is very good, although slightly lower than in previous seasons. He may have a hard time reaching 20 HR's this season, but he should be productive in almost every area, especially runs scored considering that he's hitting atop one of baseball's best lineups.

Adames went 4-5 with a 2B, a HR, and 4 RBI against the Padres on Thursday, hitting out of the #2 hole for the first time with his new team. This was his first big game for Milwaukee, as he had gone 3-15 without an XBH in his first five games following being traded from the Rays. Overall, Adames is still hitting just .217 for the season, with his 33.1% K% being the primary culprit. He's a mediocre fantasy option, as he strikes out too much to hit for a good average and he doesn't steal many bases. He does have some power though; he hit 20 HR's in 2019, and has kept at a similar pace since then (14 HR's in 101 games since the start of 2020). That's enough to a make him at least a passable option if you're stuck in the MI.

Soto went 1-2 with a BB against the Reds on Thursday, one of only two Nationals to record a hit in the ballgame. Soto has been surprisingly quiet for much of this season, and over his last 27 games, he is hitting .247 with just 2 HR's, 3 doubles, and 9 RBI. He still has an elite 12:21 K:BB during that stretch, but the power has been mysteriously missing. Soto's 48.6% HardHit% is a bit lower than last year but still excellent. It seems though that his low FB-rate (24.8%) is finally coming back to haunt him. Soto didn't hit a lot of fly balls last year either, but survived off of a ridiculous 36.1% HR/FB. That number is not sustainable, and he will probably need to cut back on the ground balls, if he wants to grab another 30+ HR season. All that being said, Soto's .537 XSLG dwarfs his actual .413 SLG, which indicates that there's a good amount of bad luck here. If you're going to sell, you better be selling really high.

Turner homered against the Giants on Thursday, giving him 2 HR's in 3 games, following a stretch in which he hit 2 HR's in 31 games. Despite having gone through an extended power outage, Turner has already hit 9 HR's this season, putting him on pace to potentially pass his career high of 27 dingers. We don't typically think of Turner as a power hitter, but he did average 22 HR's per season from 2016-2019. This season could be even better as he currently boasts career highs in EV (91.2) and HardHit% (47.3%). While the power has been there, Turner's .266 BA would be quite low for him as he hit at least .275 in each season since 2012, while batting at least .290 in 6 of the last 7 seasons. The low BA is a result of a career high 21.3% K%, but his 7.8% SwStr% and 25.6% CSW% remain very strong, so his K% is likely to go down as the season progresses.