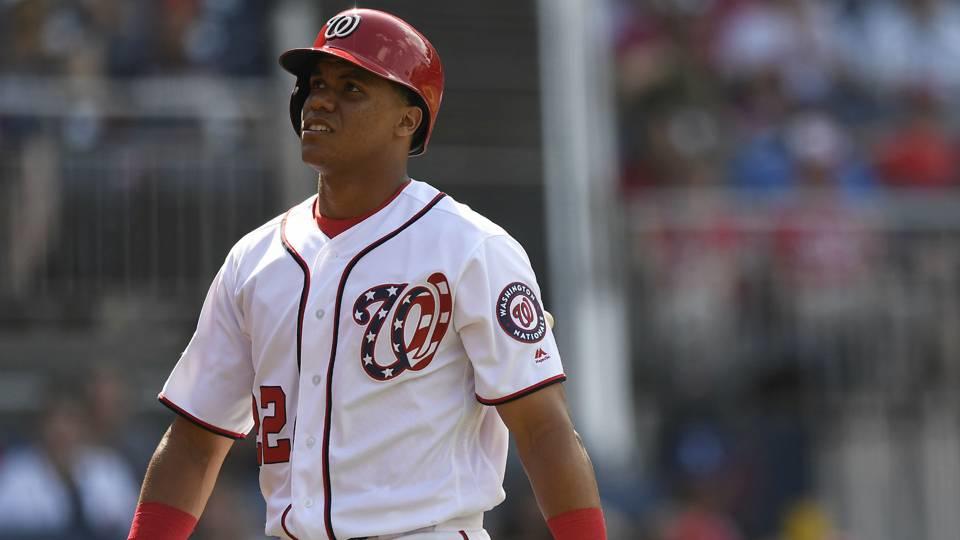 Juan Soto went 3-for-4 with a double, two homers, three runs, five RBIs, and a walk on Monday against the Marlins. Soto helped pace Washington's 18-1 victory with his third multi-homer game of the season -- two of which have come in his last four games. After an up-and-down first half, Soto has found his power stroke over the past two weeks with seven homers, 15 RBIs, and 16 runs over his last 10 games. He's collected multiple hits six times during that stretch as well, lifting his average from .274 to .301 and his OPS from .818 to .933. Soto also leads the NL in OBP thanks to his league-leading 61 walks. While his rate stats remain well below last year's abbreviated 1.185 OPS, his overall production is more in line with his 2018-19 numbers. Still just 22, Soto is one of the best hitters in baseball and could be primed for a huge second half.

Jon Lester picked up his third win of the season on Monday after shutting out the Marlins for seven innings, scattering six hits while striking out seven. Monday was easily Lester's best start of the year, as the seven innings and seven strikeouts were both season bests for him. He was efficient as well, needing just 81 pitches to get through seven frames. He likely could have completed the game if necessary, but with Washington up 18-0 there was no need to push him. The sharp outing was a return to form for Lester, who'd hit a rough patch recently with an 11.48 ERA over his last four starts. He's now 3-4 with a 4.99 ERA, but given his age (37) and poor peripherals he's not a reliable option in standard mixed leagues. He's still a viable streaming option in deeper leagues, however, and will be worth a look when he takes on the hapless Orioles in Baltimore this weekend.

Miguel Rojas went 3-for-4 with a double and a solo homer against the Nationals on Monday. Rojas was pretty much the only bright spot for Miami in Monday's 18-1 shellacking at the hands of Washington, scoring their lone run with his eighth-inning solo shot. The long ball was his fifth of the season and first of July, but he's showed a bit more gap power with 20 doubles thus far. Monday also extended his hitting streak to a modest seven games, three of which have been three-hit affairs. The heater has raised his average from .251 to .276, while his OPS has gone up from .701 to .754. Rojas has gotten a few looks in the leadoff spot as a result, which could give his fantasy numbers a slight boost going forward. For now, though, he's merely a serviceable middle-infield option in NL-only leagues.

Michael Conforto helped New York to a 15-11 win over Cincinnati on Monday by going 3-for-6 with two homers, three runs, and three RBIs. The performance -- which included a fourth-inning two-run shot and an 11th-inning solo shot -- was Conforto's first multi-homer game of the season. Monday also marked his first three-hit game since May 2 and just his second overall this year. It goes without saying that this has been a terrible season for Conforto thus far, as he's hitting just .217 with six homers, 24 RBIs, and a .718 OPS over 56 games -- a far cry from his career levels. That said, he still has time to turn his season around, which is what he's been doing lately with four homers and three mult-hit efforts over his last five games. Slow start aside, his track record is too good to ignore, so go out and grab him if he's still available in your league.

Paul Goldschmidt powered the Cardinals to an 8-3 win over the Cubs on Monday, going 2-for-5 with a homer and two RBIs. Goldschmidt, who tacked on an insurance run with his sixth-inning solo shot, remained completely dialed in at the plate. He's now hit safely in 14 straight games and has homered five times during that stretch, including four times in his last five games. He's knocked in 13 runs during that span as well despite serving as the team's No. 2 hitter. The heater has lifted Goldschmidt's OPS from .720 to .800 and his average from .247 to .273. He's up to 16 homers and 54 RBIs on the year as well, making the 33-year-old a viable fantasy option in mixed leagues again following his ice-cold start to the season.