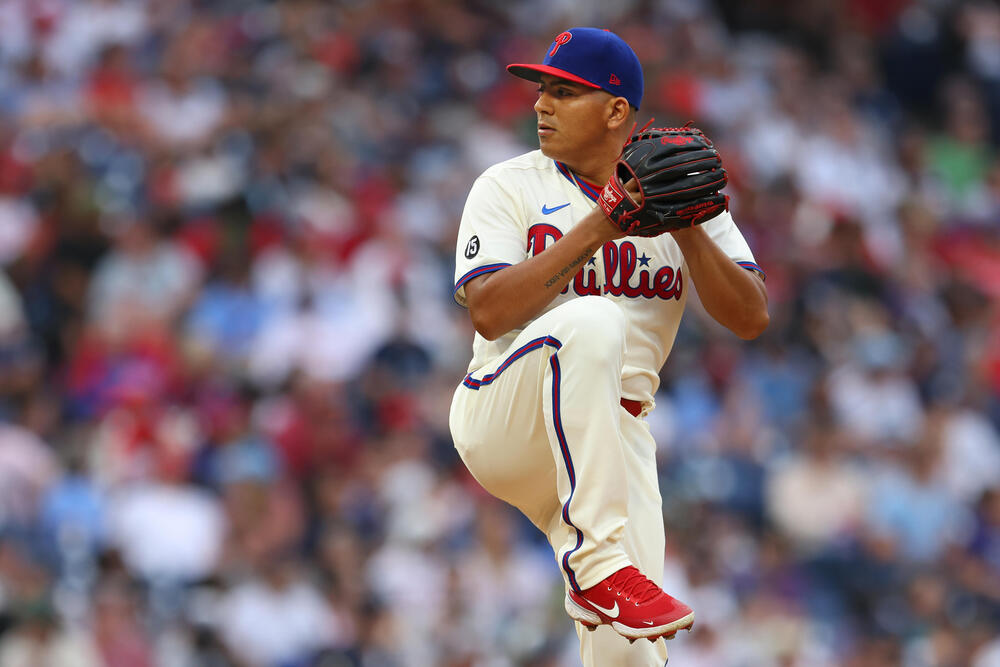 Ranger Suarez SP-PHI) tossed a complete-game shutout against the lousy Pirates on Saturday, scattering 4 hits and walking none while racking up 7 punchouts. The 26 year-old southpaw needed to throw just 97 pitches to complete the gem, 63 of which he put in the strike zone. Through 99 innings pitched this season (11 starts and 27 relief appearances), Suarez has compiled a 1.45 ERA, 8.9 K/9, and 2.9 BB/9. His 3.42 xFIP does point to a .249 BABIP, 85% strand rate, and 6% HR/FB suppressing his ERA. Despite his slightly below average ability to miss bats (11% swinging-strike rate), Suarez has decent control and excels at inducing grounders (60%). Opposing hitters, moreover, have mustered just a 31% hard-hit rate against him in 2021. So, there are some things to like about Suarez's profile, but given his lack of strikeout ability and middling contro, he seems more like a mid-rotation type for fantasy than an ace he has seemed to be. For the time being, he does line up for a turn in Miami next week.

Tyler O'Neill (OF-STL) continued his breakout campaign by going 1-4 with a solo bomb against the Cubs on Saturday. The 26 year-old slugger is now hitting .279 with 32 big flies, 76 RBI, 84 runs scored, and 13 stolen bases across 512 plate appearances in 2021. His strikeout rate is not good at 32% and he still doesn't show a ton of patience at the dish (7% walk rate), but O'Neill has logged a career-high 52% hard-hit rate per Statcast to go with a healthy 23% liner rate and productive 41% flyball rate. He's swinging slightly more often (75%) at pitches inside the zone and making contact with them at an identical 77% clip as he did last year. Overall, his contact rate is identical to last year's rate at 67%, which does not inspire much confidence going forward. He doesn't exactly chase pitches outside of the zone at a high rate, doing so at a league-average 32% clip, so his main issue is a hole that he has always had in his swing. The key to his success in 2021 has clearly been the vastly higher hard-hit rate, so it will be interesting to see if he can sustain that going forward. Based on the peripherals, which do not indicate significant improvement in any categories beyond the hard-hit rate, one should not invest too much in him on draft day 2022.

Harrison Bader (OF-STL) filled the stat box against the Cubs on Saturday afternoon, going 4-4 with a 2B, a homer, 2 RBI, 3 runs scored, and 2 stolen bases. The 27 year-old has had a fairly quite 2021 campaign up to this point, as he is now hitting .270 with 14 longballs, 48 RBI, 41 runs scored, and 8 steals across 377 plate appearances. Although he's done an alright job of putting the bat on the ball (78% contact rate), his hard-hit rate comes in at an unimpressive 30% per Statcast and, as has been the case throughout his career, Bader hasn't hit many liners (under 17%) while he's been fairly pull-heavy (45%). As his wRC+ of 111 indicates, he's a mildly productive player whose combination of modest power and speed makes him interesting in fantasy. But he's yet to log more than 427 plate appearances in a season since making his debut back in 2017.

Wade Miley (SP-CIN) landed on the IL because of a neck issue and his season is likely over. Miley put together a solid 2021 campaign overall, assembling a 3.37 ERA., 6.9 K/9, and 2.8 BB/9 across 28 starts (163 innings); an xFIP of 4.08 does indicate that a strand rate just south of 80% is helping to suppress his ERA. It's also worth noting that he has largely struggled since the calendar turned to September, as he has an 8.35 ERA and 2.18 WHIP across 4 starts (18.1 innings), with the longball (3.44 HR/9) being a major issue. His 4.43 xFIP does indicate that he's been pretty unlucky during that span (33% HR/FB), but something has definitely been off for roughly the last month. Overall, given the disparity between his ERA and xFIP this season, as well as his very low K rate, it's tough to put much stock in Miley being much of a fantasy asset in 2022, at least not on the level that he was this season.

Joey Bart (C-SF) is now rated as the #16 overall prospect in baseball per MLB Pipeline, and the #3 prospect at the C position. The 24 year-old has logged just 6 plate appearances in the majors in 2021 after making 111 PA back in 2020, as the return of a largely-healthy and productive Buster Posey has allowed the franchise to keep him in development in the minors. And it was a fairly productive year for the backstop in Triple-A, as he hit .293 with 10 dingers and 46 RBI across 276 plate appearances. Locked in behind the plate because of his defensive prowess and leadership abilities, Bart's hit tool grades as average while he possesses above-average power. He did fan at a 29% clip in Triple-A this season en route to logging a pretty meh wRC+ of 106, but bear in mind that it's his first run at that level after jumping from Double-A to the MLB last season, and he predictably struggled in his first taste of the majors, hitting just .233 and striking out at a 37% rate. The future is still pretty bright for Bart, although his arrival in the majors as a full-time player largely depends on Buster Posey.