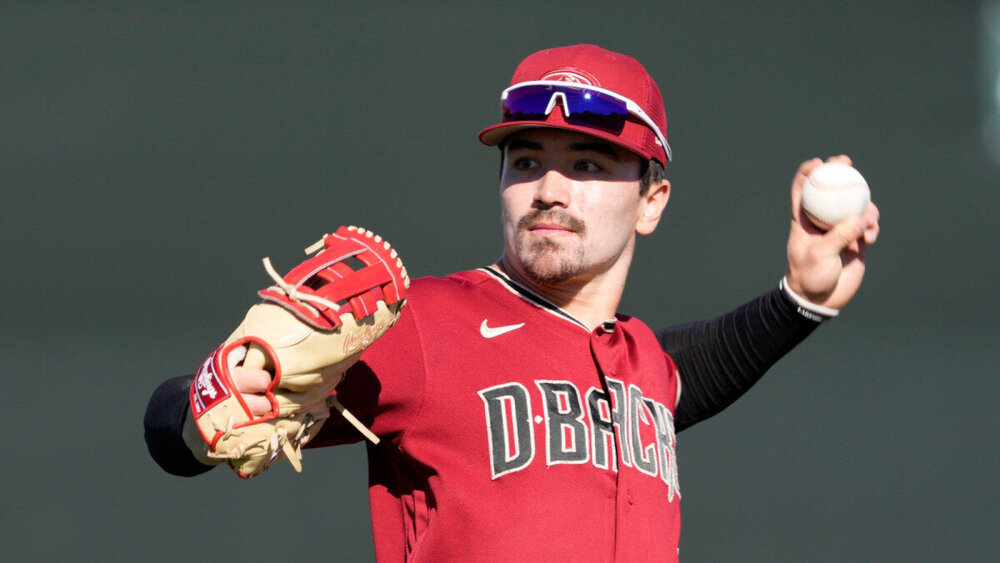 Corbin Carroll (OF - ARI) - Corbin Carroll made his major league debut on Monday, going 1-5 with a 2-run double in the victory over the Phillies. Carroll is a must-add in all formats immediately, as the 22 year old could easily be a 5-category contributor. He has excellent strike zone judgment (15% BB rate this season) and good contact ability, he hit 23 HR in 91 G at AA and AAA and was 6th in all of the minors in hard hit rate, and he has stolen 31 of 36 bases this season as well. He hit 8th in the order in his debut, but I could easily see him move up if he adjusts well. There is so much upside here and the floor would appear to be fairly solid as well, and he just turned 22 last week. The D-Backs are actually putting together an interesting little offense with all of the promotions....Stone Garrett has homers in back-to-back games now and, although there are massive contact issues, the power is absolutely legitimate and there's some speed there as well. Alek Thomas and Jake McCarthy are less fantasy relevant but have some promise too. It's a fun team to watch now.....offensively at least.

Garrett Mitchell (OF - MIL) - The Brewers brought up Garrett Mitchell, one of their top position prospects, on Sunday, and the 23 year old has shown off the tools through 2 games with a homer, a steal, a walk, and 4 RBI already....and a couple K's. Mitchell is a very patient hitter with good speed and power potential, so he obviously merits some scrutiny right off the bat, particularly in deeper leagues. The big problem that we've seen from him so far is the huge GB rate at just about every step of the minors (57-64% at every stop), something that obviously severely limits the raw power from showing up in games. Mitchell is much more potential than actual in terms of production right now, but the decent contact ability should keep the floor reasonable enough where he's worth taking a chance on in most formats if you have an OF need. I think it's unlikely that this hot start turns into huge production the rest of the way, as a 60% GB rate shouldn't just disappear at the MLB level, but there's enough ceiling here despite that to have some interest.

Tyler O'Neill (OF - STL) - O'Neill has had one of those years, with multiple IL trips and early-season struggles completely torpedoing his performance. It looked like he was heating up in June before the 2nd IL stint, but was pretty cold again when he came back for almost a month. He seems to be heating up finally now though, as a pair of homers in the 13-4 drubbing of the Reds Monday night give him 5 in the past 7 games. Much of the skill set still seems intact from last year despite the injuries: the EV is down but still above average and climbing, the speed has still been good, and the contact rate is actually much improved. If there's such a thing as "buy low" in late August, O'Neill definitely fits the bill, and I'd encourage everyone to not sell him short in 2023 despite what will look like a very subpar year.

Pablo Lopez (P - MIA) - Lopez was decent against the Dodgers on Monday evening, allowing quite a bit of hard contact but ultimately only 5 hits and 2 runs over 6 innings, walking 3 and fanning 6 in a no-decision. So much of his decline since May has been BABIP-related, but in watching him there's no denying that the stuff just isn't quite as sharp as we've become accustomed to seeing from him. He's still missing bats and the control is still pretty solid, but there's been much more hard contact and some unusually poor outings at home. The remaining schedule has some good news (3 home starts, 2 road) and bad news (4 of 5 vs. top 6 offenses) for Lopez...3 months ago he was a "start everywhere but in Colorado" kind of a guy for me, but we can't get married to our preseason perceptions, and he isn't quite that for me right now. The starts in Atlanta and at Citi Field are a bit worrisome, and Philly and the Mets visiting Miami aren't as comfortable as I'd like either. Still, I think you probably want to continue rolling with him at home and using your judgment on the road despite the few land mines that he's hit at home lately....unless of course you have alternatives that are also top-50 SPs, a category which most likely still includes Lopez.

Keston Hiura (1B/2B - MIL) - Hiura came on for an injured Rowdy Tellez halfway through Monday's night's game against Pittsburgh and ended up with a fairly typical game for him: 2 K's and a game-winning 2-run HR. Hiura entered the game hitting 250/318/625 since his return from the minors, and despite the massive contact issues he just offers too much upside in power and speed to ignore for fantasy purposes. For me he's a 30/15 guy if he plays every day, which is very questionable since MIL can't seem to figure out that he isn't a platoon player, at least not in the traditional sense. If this injury to Tellez is time-consuming at all, Hiura becomes a must pickup for me.

Tweets by Fantistics
Get Marquez away from the Mountains- August 29, 2022
Can Chris Morel put his recent slump behind him? - August 31, 2022