As many of you know, Fantistics has a show on SirusXM Fantasy Sports Radio every weekend morning from 10AM-1PM. I'm lucky enough to be able to join our hosts Lou Blasi, Walter Kuberski and Sky Dombroske for a segment on nearly every show. It's something I love to do but in the offseason, it's sometimes difficult to continually find new information that actually adds value to the subscribers who tune in.

I got the idea this week while talking to one of my good friends (and most trusted fantasy baseball nerd). He was talking about how he wanted to look into the best time to play it safe and the best time to take risks in the draft. The topic intrigued me so I decided to pull some recent historical data to see what trends I could find. To do this, I went back 5 years and compared ESPN's pre-season ranking of the top 250 players to their actual performance in the same year using their player ranker. I was hoping to determine rounds that had higher variance than others. For the rounds that vary at a higher rate, I hypothesized that those rounds would be the best time to stray from the rankings to take some risks.

In the charts below, I show the 5-year average round variance broken down by each individual round assuming a standard 12-team league. In other words, if a player was ranked 1st going into the season but finished 27th overall, there would be a two round variance (1st round pre-season rank vs 3rd round actual finish). I took the average of all the players' variances in each round which then allowed me to find the overall round variance average. One adjustment I did make to the data was that I capped the total round variance at 30 rounds to prevent data from getting too skewed (i.e. an injured Tulowitzki ranking in the 1st round of the draft in the preseason, might actually be rated as the 700th best player if he missed most of the year. The 700th best player would theoretically be ranked as finishing in the 59th round (700 players /12 players per round = 58.3). Instead of showing a variance of 58 rounds, I forced it to be a variance of 30 rounds). Outside of really deep leagues or an NFBC Draft Champions format, most drafts won't exceed 30 rounds so it's unrealistic to expect a player whose value exceeds 30 rounds to be drafted.

The results were really pretty interesting and I think they go hand-in-hand with the value that our draft software adds to our customers, particularly how we handle VAM and the inflated EAV (read more here). I'll be going on XM today at 11:35 AM to discuss this with the guys in more detail. Give us a call or catch the show on-demand through the Sirius XM app. 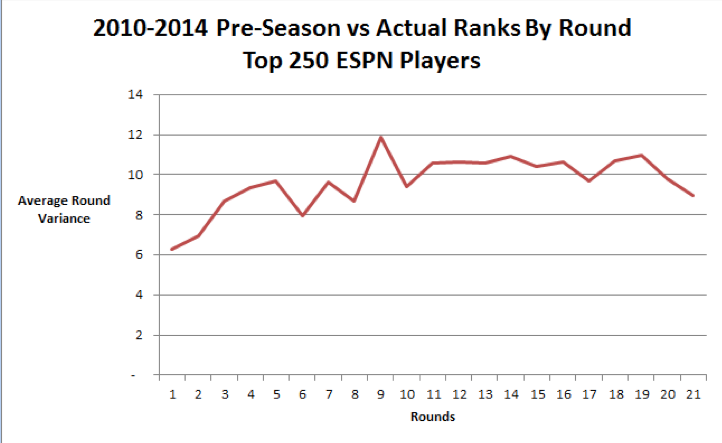 Draft Advisor: bring our winning strategy (Serpentine / Auction) to your draft. Our player rankings adjust as players are selected, adhering to the changing dynamics of your draft. After a player is selected/drafted, the software will display/suggest the best players remaining. Purchase Today!

Tweets by Fantistics
Do I Have to Draft a Catcher? By Kyle Elfrink
Zone Control and Player Valuation