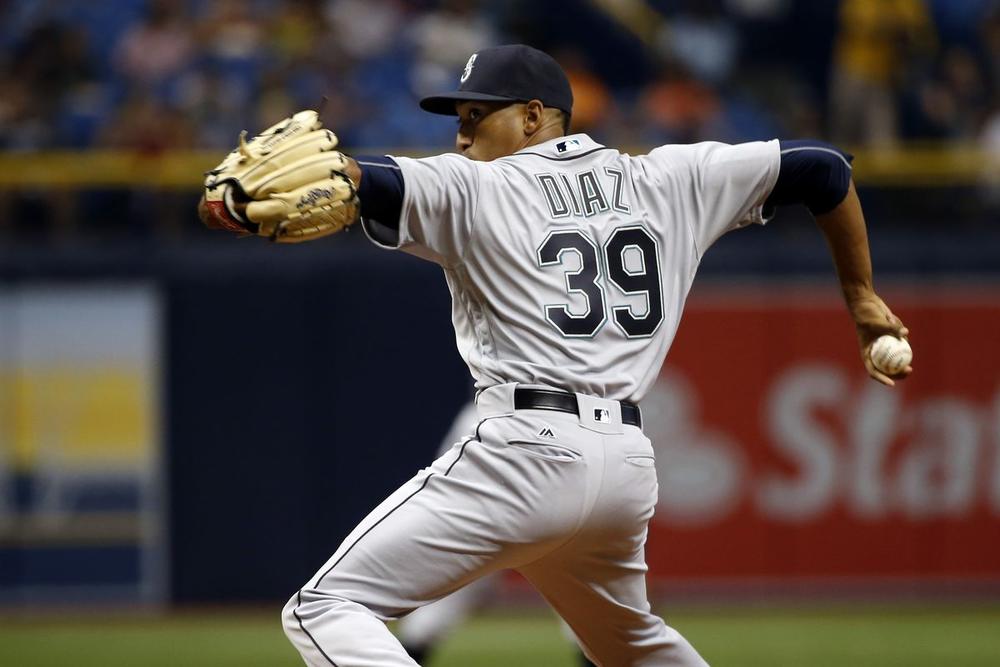 MVP: Edwin Diaz - Saving 36 games in the first half has a funny way of making you a shoo-in for MVP honors. That first half total is two more than he saved during the entire 2017 season and he's managed to do all of it with a big increase in his strikeout rate to 43% and decrease in his walk rate to 7%. He's going to likely challenge for the single-season save record, but innings pitched may become a concern since he's already at 48 after throwing just 66 last year. With solid options in Juan Nicasio and Alex Colome behind him in the Mariners bullpen, Seattle may give him a little more rest as they try to keep him fresh for the playoffs.

Biggest Surprise / Best FAAB Bargain: Bud Norris - Heading into spring training, most people were convinced that Luke Gregerson would head the committee of closers for the Cardinals. After he got injured in spring training, Dominic Leone became the popular name until the team inked Greg Holland. While Holland has a strong case as a draft day bust, his ADP never rose high enough since he was signed immediately before the start of the year. After rushing to get ready and struggling with command, the team turned to Bud Norris, who ended up being the best bargain in FAAB of the 2017 season since most saw his contributions as temporary. Fast forward three months and Norris has grabbed hold of the reins and isn't letting go anytime soon. Norris' 33% strikeout rate and 4% walk rate are not only the best of his career, but they're also among the best in baseball. The Cardinals will likely hang around in the playoff race, so Norris will continue to play a valuable role on a pretty good team.

Newcomer of the Year: Blake Treinen- While he isn't necessarily a newcomer to the major leagues, this was the first time Treinen was ever viewed as a team's primary closer heading into the season. Thrust into the closing role in Washington last season due to injuries, Treinen was a complete disaster for the Nationals until he was traded mid-year to the Athletics. After proving his worth in middle relief for the A's in 2017, he was rewarded with the closer role in 2018. Once viewed as a prime trade candidate for the low-budget team, Treinen is now a key pitcher on one of the American League's playoff contenders.

Best Draft Day Return: Keone Kela - Going nearly undrafted or near the end rounds in most drafts due to the uncertainty of the Rangers' committee approach, Keone Kela has proved more than worthy of his ADP this season, saving 23 games and establishing himself as the primary closer for Texas. Whether he ends the season with the Rangers or gets dealt at the deadline is anyone's guess, but there's no denying that he was easily the best value among any pitcher at his position.

Biggest Draft Day Bust: Ken Giles - For a guy being drafted among the top-5 at his position in some drafts, Giles is also a shoo-in for biggest draft day bust. Currently working through his issues at Triple-A, Giles never actually blew a save this year, yet struggled in non-save opportunities. The latter became his most frequent type of appearance near the end of his time with the Astros, as AJ Hinch never really seemed to give him back the trust his lost during the 2017 playoffs. In an ideal world, Giles will get his head on straight in the minor leagues and return to the Astros in low leverage situations, but only time will tell. Don't write him off as a trade candidate, which may ironically add to his value if he's dealt to a rebuilding team in need of a closer.

Lady Luck's Most Prized Possession: Kyle Barraclough- Kyle Barraclough has been tremendous since taking the role as closer, but man has he ever been fortunate! Barraclough' s 14% walk rate and 34% hard hit rate should be getting him into hot water a little more frequently than it has been, largely because his 93% strand rate is bailing him out. What drives that strand rate? A high strikeout rate, like Barraclough's 27% certainly helps, but other luck factors like BABIP (.158 in 2018 compared with .259 career) are certainly key ingredients. Barracloough is a candidate to get dealt, but even if he doesn't his performance will almost certainly regress in the second half. Selling now wouldn't be the worst thing in the world...

Best "Skill" Handcuff in the 2nd Half: Dellin Betances (NYY)

Best "Opportunity" Handcuff in the 2nd Half: Drew Steckenrider (MIA) (although he could be dealt too)

-Padres got the closer market rolling with a huge deal that sent their closer, Brad Hand, to the Indians in exchange for the Indians' top prospect. Hand immediately loses fantasy appeal in most 5x5 traditional fantasy leagues, while Kirby Yates is the heir apparent for the Friars (at least for now). With that said, there remains a strong possibility that Yates could end up getting dealt before the trade deadline in ten days, as well. Yates is your primary grab, but speculative owners will also grab Craig Stammen, just in case another trade goes down.

-Speaking of going down, Brandon Morrow went down with another injury, this time to his right biceps. Morrow has failed to stay healthy for an entire season for most of his career, so this shouldn't come as a huge surprise. In the first save chance without him, the Cubs used CJ Edwards in the 8th inning and allowed him to get two outs in the 9th before putting in Pedro Strop. This situation remains a strong committee consisting of those two, plus Steve Cishek. As for Morrow, most of the Cubs spokespeople chalk it up as minor, but who really knows with these types of things. If I had to pick up one guy, I wouldn't do it. Edwards has the most raw talent, Cishek has the most experience and has been used as closer this season, while Strop has been Maddon's primary 8th inning guy. Don't sleep on the Cubs acquiring a bullpen arm like Zach Britton or Keone Kela, either.

-We won't talk about Josh Hader's Twitter controversy beyond saying that the Brewers will not extend any discipline, so his only requirement will be to attend sensitivity training. If you are a Hader owner, this issue will hopefully not impact his performance on the field.

-There is still no indication when the Nationals may activate closer Sean Doolittle. Ryan Madson is still the only reliever who has seen a save chance since Doolittle hit the disabled list, but it could also be Kelvin Herrera in the right situation.

-Trade talk surrounding Mets closer Jeurys Familia is picking up. Familia has had an up-and-down season, but continues to post a strong groundball rate (51%) and above average strikeout-walk rate (17%). Robert Gsellman would be a good speculative grab, just in case Familia is dealt in the next two weeks.