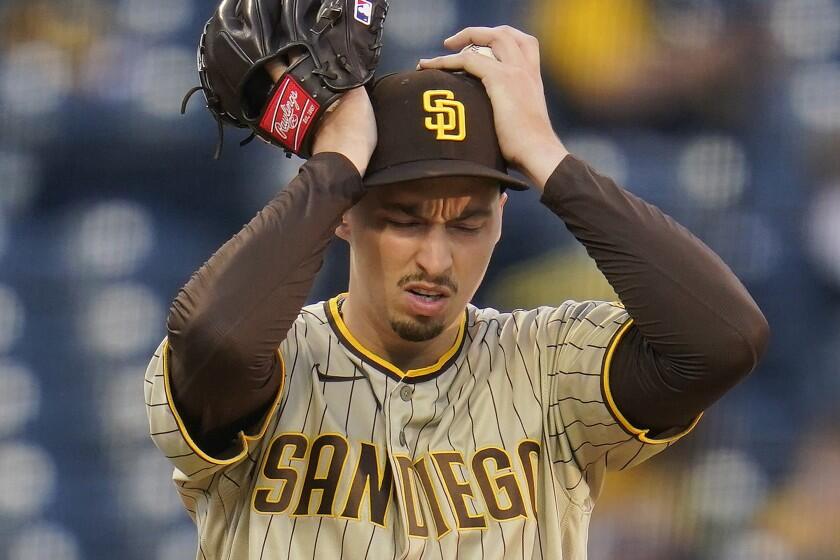 3B Josh Rojas (oblique) has started his rehab assignment. He should be able to return to the lineup very soon. This is going to send 3B Sergio Alcantara to the bench and limit the playing time of SS Geraldo Perdomo. SS Fernando Tatis Jr. (wrist) has not been able to swing the bat yet. This is not considered a setback but reminds us of the difficulty in trying to nail down a return date for injured players. We will have a better understanding of his timetable once he starts swinging a bat. OF Nick Castellanos (wrist) was hit on the wrist by a pitch on Thursday. The x-rays came back negative. He returned to the lineup on Saturday. OF Wil Myers (thumb) has been able to hit off a tee after the swelling in his thumb has decreased. The next step in his recovery is to see some sort of game-like at-bats to really test the thumb. OF Matt Beaty has been playing most days in his absence with OF Trayce Thompson getting an occasional start here and there. 1B Luke Voit (bicep) is going to have his rehab extended. This is not injury-related but gives him a chance to get the bat going after struggling mightily to start the year (.143 AVG /.315 OBP/.167 SLG). OF LaMonte Wade Jr. (knee) has been activated from the 10-day IL. He figures to enter the strong side of a platoon. It will be interesting to see where they bat him in the order now that the majority of the outfield is healthy. OF Mike Yastrzemski has returned and has been leading off. OF Joc Pederson missed some time but has been back at DH. OF Luis Gonzalez is the one that is going to lose playing time with this move. DH Nelson Cruz (back) has been day-to-day this week with back stiffness. Hopefully, this is something that clears and Cruz can go back to being the everyday DH. He has struggled to get it going (.143 AVG with 2 HR). His plate skills look good (11% BB and 17% K) but his barrel% has fallen significantly (8%). 3B Carter Kieboom (elbow) has started throwing and isn't eligible to return for another month. This means that 3B Maikel Franco will continue to see everyday at-bats. 2B Jonathan India (hamstring) has been placed on the 10-day IL and is going to be out for at least two weeks. The Reds want to make sure that it heals this time so that he doesn't have to play injured and/or miss games. 2B Brandon Drury has been playing second and batting second for the Reds. He figures to continue to get the majority of playing time at second but the bump in order is a result of 1B Joey Votto (Covid), OF Tyler Naquin (Covid), OF Jake Fraley (knee), and OF Nick Senzel (Covid) being placed on the IL. OF Kris Bryant (back) hasn't been able to hit since being placed on the IL. He will likely require some sort of rehab assignment before coming back but that will be determined by when he can swing a bat again. 2B David Bote (shoulder) is hoping to return when first eligible (June 6). SS Kevin Newman (groin) has resumed all baseball activities except for running. The Pirates have been using a combination of SS Cole Tucker and SS Diego Castillo at short in his absence. The problem with that is neither are fantasy relevant due to splitting time. 3B Joey Wendle (hamstring) has missed time this week and is considered day-to-day. 2B Tommy La Stella and 3B Evan Longoria (finger) have begun rehab assignments. C Carson Kelly was scratched from the lineup on Friday with left abdominal tightness. 3B Brian Anderson has been placed on the Covid IL. The Marlins called up OF Bryan De La Cruz to take his roster spot. SS Jose Barrero (hand) experienced a setback in his recovery. This is not great news for the struggling Reds. C Robert Perez was removed from the game with a hamstring strain and he was placed on the 10-day IL after the game. This means more at-bats for C Andrew Knapp. OF Aristides Aquino was outrighted to Triple-A when the Reds activated OF Tyler Naquin off the Covid IL. SS Didi Gregorious was placed on the 10-day IL with a left knee sprain. The Phillies called up SS Bryson Stott to take his place. 1B Brandon Belt was activated from the Covid IL.

Nick Lodolo (back) was scheduled to start the first game of the Reds doubleheader with the Pirates but didn't after Friday's game was canceled. Lodolo had a 5.52 ERA and 1.57 WHIP in 14.2 IP prior to the injury. However, the skills underneath look good (28% K, 7% BB, and 2.97 SIERA). It is unclear when he will start next as the Reds determined he was not ready to return. Blake Snell (groin) made his second rehab start on Wednesday. He went 4 IP with 8 K and 2 BB. He progressed to 66 pitches in this one so the Padres could bring him back and build him the rest of the way up at the major league level or he could get another rehab start. Either way, he is close to returning. With the recent return of Mike Clevinger, the Padres are going to have to make a move at the end of the 6-man rotation. Either Nick Martinez or MacKenzie Gore is going to be bumped from the rotation. Gore has the better results (1.71 ERA and 1.19 WHIP) but he has options. Martinez is a veteran but could also be used as a long relief guy. This situation is complicated and there is no lean one way or the other. Luis Castillo (shoulder) is scheduled to make his season debut on Monday against the Brewers in Cincinnati. In his most recent rehab start, he was able to get up 76 pitches so he is close to a full workload once returning. Mike Minor (shoulder) was able to throw a simulated game on Wednesday. He is expected to begin a rehab assignment. Anthony DeSclafani (ankle) played catch on Monday this week and once he ramps it up to bullpen sessions he should be close to returning. Wade Miley (elbow) began a rehab assignment on Thursday. He is going to need multiple rehab starts to build up his pitch count because he missed Spring Training. Jack Flaherty (shoulder) threw a bullpen session on Saturday and was allowed to throw all of his pitches. Until he starts to face hitters in simulated games or live BP we won't have an understanding of his timetable for return. Mike Soroka (Achilles) has started light mound work as he tries to return from his second Achilles surgery. Right now the goal is for him to return around the All-Star break. From a fantasy perspective, expecting him to make any type of contribution this year is difficult at this point. Adam Wainwright was placed on the Covid IL on Friday after testing positive.

Dylan Floro (shoulder) is close to returning. The Marlins have been using Anthony Bender as their closer but he has struggled (5.79 ERA and 1.39 WHIP). His strikeout stuff has disappeared (20% K and 9% SwStr) so there is a good chance that Floro at least gets an opportunity to get the job back. David Price (illness) is expected to return early next week. Trevor May (triceps) is going to be shut down for at least four weeks from throwing. This moves Seth Lugo next in line if something were to happen to closer Edwin Diaz. Mark Melancon (Covid) has been able to throw long toss and a bullpen session. He will be activated once he clears the protocol and this pushes Ian Kennedy back into a setup role. Josh Hader dealt with back spasms early in the week but the hope is that this will not be a reoccurring injury. The Pirates bullpen continues to be a timeshare based on matchups. David Bednar picked up the Pirates lone save this week. He may have the superior stuff and numbers but the Pirates are set on using him in the highest leverage spots which means Chris Stratton will remain fantasy relevant.

SP Nick Lodolo (CIN)- Nick Lodolo (back) was scheduled to start against the Pirates on Saturday but Friday's cancelation changed those plans. It is not clear when he will start next due to not being ready, according to the Cardinals. Lodolo had a 5.52 ERA and 1.57 WHIP in 14.2 IP prior to the injury. However, the skills underneath look good (28% K, 7% BB, and 2.97 SIERA).

1B Juan Yepez (STL)- The Cardinals called up Juan Yepez this week and he has started each of their last four games. He has hit fifth which means they have confidence in his bat. He hit .279 with 9 HR, 15 R, 26 RBI, and 0 SB in 22 GP at Triple-A. He has shown throughout the minors a power-centric approach. He has a good eye at the plate with just enough contact to maintain a respectable batting average. It's unlikely he plays every day due to the presence of Albert Pujols but the Cardinals should give him an extended look.

1B Christian Walker (ARI)- Christian Walker's batting average (.154 AVG) is not encouraging at all. It is the underlying skills that should have you interested in him. He has above-average plate skills (10% BB and 23% K) to go along with excellent quality of contact (16% Barrels and 47% Hardhit). The issue that is driving down his batting average is a .129 BABIP. His BABIP is low because of bad luck and the fact that he has hit 56% FB. The past three seasons he has been under 39% FB so this problem is one small correction away. Adding him now would be betting on the skills and improvement in his launch angle.

RP Ryan Helsley (STL)- Ryan Helsley has been lights out for the Cardinals this year. He has a 0.00 ERA and 0.10 WHIP with 65% K and 0% BB in 10 IP. It is a small sample but he has looked dominant. The strikeouts are legit considering his 26% swinging-strike rate. There is also a good chance he gets some save chances with the Cardinals coming into the year wanting Giovanny Gallegos to be used in the most critical spots not necessarily as a traditional closer.

RP Spencer Strider (ATL)- Spencer Strider has excelled in long relief for the Braves. He has a 2.16 ERA and 1.08 WHIP with 23% K:BB. In his most recent outing, he went 4 IP. There is a chance that he enters the rotation but even if he doesn't, being a follower is a great way to get wins in addition to his help with ratios.

OF LaMonte Wade Jr. (SFG)-LaMonte Wade Jr. has returned to the Giants and he will be on the strong side of the platoon. This isn't ideal but he will get the majority of the playing time and he bats leadoff when in the lineup. A year ago in the same role, he hit .253 with 15 HR/6 SB. The upside is limited in weekly formats due to the platoon but in daily formats, he is a great bat to have.