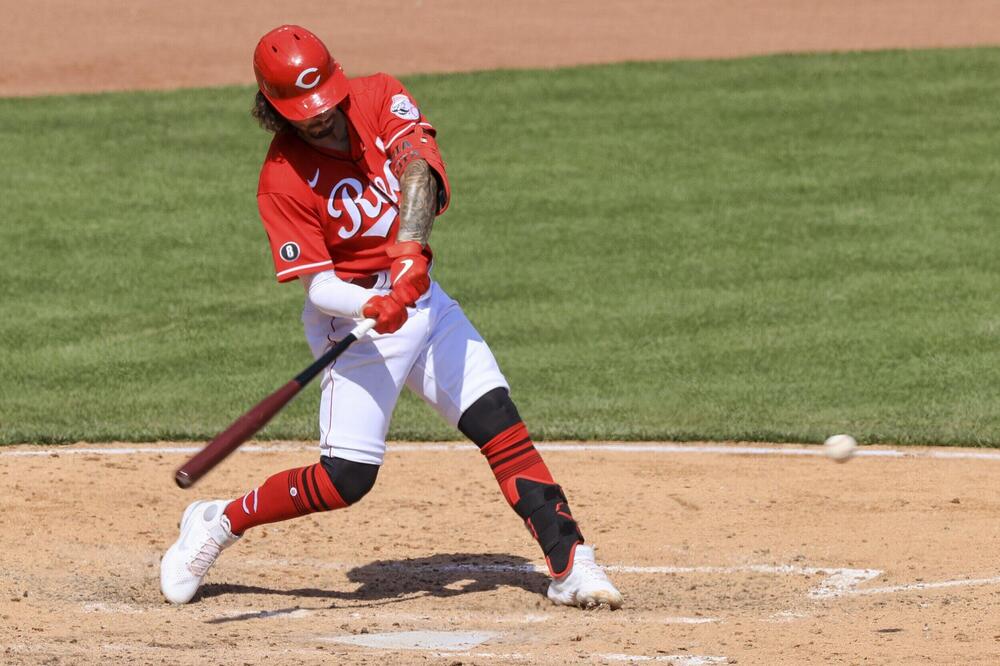 C Tyler Stephenson was placed on the 7-day concussion IL after the home plate collision with 1B Luke Voit. 3B Mike Moustakas was placed on the 10-day IL with a right bicep strain. 1B Colin Moran will see the majority of playing time while he out. OF Nick Senzel has returned from the Covid IL but OF Tyler Naquin is still out. OF Aristides Aquino has been playing every day while in the interim but their outfield should be back to full strength very soon so he will shift back into a part-time role. 1B Josh Bell (knee) was back in the lineup on Thursday after an MRI revealed no damage to his knee but he left Saturday's game with a hamstring issue. OF Clint Frazier is going to the IL due to appendicitis. He had not been starting regularly which left him viable only in NL-only leagues. 2B Josh Rojas (oblique) is scheduled to hit off a pitching machine which is a step in the right direction for his recovery. He is going to be the Diamondbacks every day third baseman when he returns. OF Steven Duggar (oblique) has been placed on the 60-day IL. This likely means that OF Austin Slater and INF/OF Mauricio Dubon should fill in for him while he is out. Neither one is going to play every day so it is hard to trust them in mixed leagues due to the uncertainty of their playing time. OF LaMonte Wade (knee) is expected to start his rehab assignment this week which is important because he could help fill Duggar's spot. UTIL Garrett Hampson (hand) is still recovering and is going to serve in a super-utility role when he does return. He was working at first base prior to getting injured. 1B C.J. Cron isn't going to lose his full-time role but this just adds to Hampson's versatility. The problem from a fantasy perspective is that Hampson needs to play every day to accumulate at-bats and fantasy stats but that is unlikely given how the Rockies are currently structured. OF Ronald Acuna Jr. (knee) was 0-3 with a walk and a stolen base in his rehab game on Wednesday. This may seem insignificant but is extremely important for fantasy purposes. The prevailing thought coming into the year was that Acuna would not run much given the nature of his injury. It is nice to see him willing to steal a base and do so without hesitation. Fantasy owners who took Acuna knowing that they would be without him for a month or so have to be encouraged right now. SS Andrelton Simmons (shoulder) is progressing in his recovery but his return is unknown and it is likely that he is going to need rehab games after being out for over a month. SS Jose Barrero (hand) has started hitting which is a good sign for his recovery. The next progression will be live BP at-bats and then a rehab assignment. He is a name to keep your eye on if you need middle infield help. 2B Gavin Lux (back) was out of the lineup on Wednesday with a minor back injury was back in the lineup on Friday. Lux has had a strong start to the year with 1 HR/2 SB and good plate skills (19% BB and 16% K). SS Didi Gregorius (hand)was not in the lineup Saturday and hasn't played since Tuesday. 2B Kolten Wong was removed from the game on Friday and is considered day-to-day. 2B Jonathan India (hamstring) ran bases on Friday and he is eligible to come off the injured list on Tuesday but the Reds haven't given any indication yet if that is when he will return. 2B Luis Urias (quad) will begin a rehab assignment this weekend. There is a good chance that if everything goes well he will return to the big league club next week. This will mean that 3B Jace Peterson will go back into a utility role. OF Jordan Luplow is close to returning. Luplow will be on the short side of the platoon with either OF Pavin Smith or DH Seth Beer which dings their values slightly due to fewer at-bats. SS Nick Ahmed was activated and will slide back into his starting shortstop role which means SS Geraldo Perdomo will head to the bench. The Padres shortstop position has started to shift from prospect C.J. Abrams to Ha-Seong Kim. Abrams is hitting just .133 and has started just two of the last five games with Kim starting all five games. It looked like a strict platoon to start the year so it will be interesting to see if this trend continues because it would be huge for Kim and kill most of Abrams value. 1B Luke Voit was not in Saturday's lineup due to a bicep injury. He is undergoing tests to determine the severity of the injury.

Roansy Contreras was optioned to Triple-A and there is not inkling as to when he will be back. Mike Clevinger went 3 IP in his latest rehab start striking out five and walking one. He only threw 48 pitches in this one so the Padres determined that he will need to make at least one more rehab start on Tuesday. When he does make it back to the big league club it is going to move someone out of the rotation. It is likely a competition between Nick Martinez and Mackenzie Gore for the last rotation spot. Gore still has options so he needs to pitch well in order to prove that he belongs in the rotation. This situation is going to get even more crowded when Blake Snell returns. He was scheduled for a simulated game on Saturday. He is not close to returning because he needs to build up his pitch count but this was a step in the right direction. Alex Cobb was placed on the 10-day IL with a groin injury. He hopes to be back in the minimum but that will depend on how quickly he heals. He is eligible to come off the injured list on April 30. Wade Miley (elbow) threw a bullpen on Friday. He will need to continue to build up his pitch count and pitch in minor league games before returning to the big league club. Andrew Heaney (shoulder) has been placed on the 10-day IL. Heaney looked good in his first couple of starts and it appears that Tyler Anderson will take his place. Anderson is worth adding if you need pitching help. Taijuan Walker (shoulder) went three scoreless innings with seven strikeouts in his latest rehab start. The expectation is that he will join the Mets rotation next weekend when they play the Cardinals. Anthony DeSclafani was placed on the 10-day IL with ankle inflammation. He has struggled so far this year and his velocity is down which is a red flag. It is hard to tell if this injury is the reason for that but he will be out for at least ten days and it could be more depending on how his ankle reacts to treatment. Stephen Strasburg (neck) was able to complete a 30-pitch bullpen session on Friday. This is encouraging news but until we have live game actions with velocity readings and reports on his stuff it is hard to even consider rostering him because there is no guarantee is close to the same pitcher as in the past. Luis Castillo (shoulder) is scheduled for a rehab start on Sunday. His most recent live BP session was just 35 pitches so he will need multiple rehab starts before returning to starting rotation.

Chris Stratton picked up his first and second saves of the year just when it looked like he wouldn't get another chance. This is a fluid situation in Pittsburgh which is not what David Bednar's owners want to hear. They are using Bednar in the highest leverage situations. Lucas Sims (elbow) returned to the Reds bullpen on Friday. It is unclear what his role is going to be initially. There is a good chance that the Reds continue to have a committee approach when it comes to saves. Pierce Johnson (elbow) is going on the 10-day IL. Dylan Floro (shoulder) has been cleared for a rehab assignment. He was considered the leading candidate for saves coming into the year but Anthony Bender has pitched well in the role to start the year. The Marlins will likely ease Floro back in when he returns and then we will get a better picture of what they are going to do with the closer's role. The most likely scenario is that they use a committee based on matchups which is not what fantasy players want to hear. Blake Treinen was placed on the 10-day IL with shoulder discomfort.

SP Tyler Anderson (LAD)- Tyler Anderson is stepping back into the rotation for Andrew Heaney. As a reliever this year Anderson was lights out (2.25 ERA and 0.50 WHIP with 27% K:BB). Things will not be the same as a starter but the Dodgers have a very nice track record of helping pitchers be their best selves so I am willing to take a shot on Anderson.

SP Miles Mikolas (STL)- Miles Mikolas gets two starts this week (NYM and ARI). They are both home starts which is a nice pitchers park. On top of the two starts, Mikolas has pitched well to start the year (1.76 ERA and 1.04 WHIP). He is doing an excellent job of limiting walks (5% BB) and missing just enough bats (21% K) to be fantasy relevant.

2B Thairo Estrada (SFG)- Thairo Estrada is playing every day at second base for the Giants. He is hitting .255 with 2 HR, 12 R, 9 RBI, and 3 SB. He has shown the ability to make contact through his small sample last year and the minors but the power isn't likely to stick around. However, if you roster Estrada it won't be for the power but the speed.

OF Joc Pederson (SFG)- Joc Pederson is hitting cleanup for the Giants when they face right-handed pitching. The Giants are only going to use Pederson in a strict platoon but this helps Pederson be as successful as possible. He has started the year hot (.317 AVG, 3 HR, 7 R, 5 RBI, and 1 SB).

SP Merrill Kelly (ARI)- Merrill Kelly has a 0.59 ERA and 1.17 WHIP with 21% K:BB. The increased strikeouts are great to see. He has increased velocity and a change to his pitch mix (more offspeed and fewer fastballs). He gets a two-step this week with a matchup against the Dodgers and Cardinals.

RP Chris Stratton (PIT)- Chris Stratton picked up two saves for the Pirates this week as they used David Bednar in the highest leverage spots. Bednar will get save chances as well but Stratton needs to be owned because it is clear the Pirates are comfortable using him to close out games.