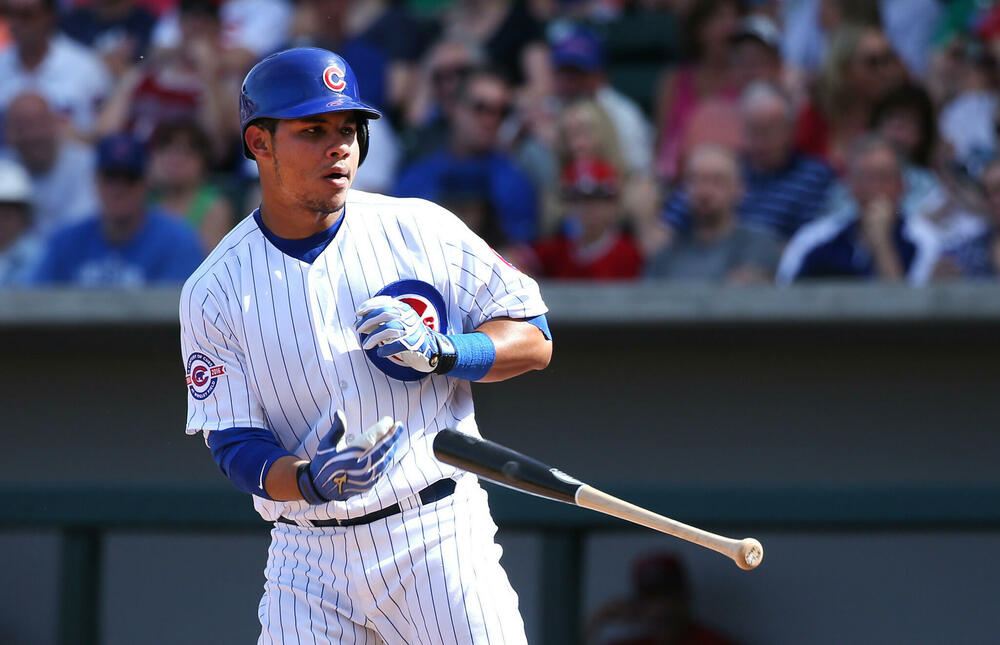 Willson Contreras (C-CHC) went 2-7 against the Brewers on Saturday, hitting his 10th homer of the year. So, in just 135 plate appearances in 2019, he's already hit as many longballs as he did across 544 plate appearances during the 2018 campaign. He's done so by raising his hard-hit rate from a below-average 28.9% to a far better 37.1% while at the same time slashing his groundballs (which I've heard don't often leave the yard) from 52% to 40.6%. While Contreras's 30% HR/FB seems obscenely high, it's not far off the 23.5% that he logged in 2016 and the 25.9% that he recorded in 2017. The power production should continue somewhere near this level, but don't expect the average to. The owner of a career .326 BABIP, Contreras currently owns a .385 BABIP while his strikeout rate has climbed 4% to 27.4%.

Pete Alonso (1B-NYM) went 1-3 with a solo home run against the Marlins on Saturday. He's now batting .271 with a dozen dingers and 32 RBI through 165 plate appearances in his rookie campaign. After hitting .292 with 9 longballs and 26 RBI through April, entering play on Saturday he was batting just .200 with a pair of bombs and 5 RBI in May. Alonso logged a 28.5% strikeout rate and 11.4% walk rate in March and April, but his strikeout rate has climbed to 34.2% in May while his walk rate has dipped to a more pedestrian 7.9%. It's certainly some combination of opposing teams starting to figure him out as well as him cooling off, but it's worth noting that in many ways his current line parallels what he did in about twice as many Triple-A plate appearances (301) last year - .260 average in Triple-A vs .271 this year, .326 ISO in Triple-A vs .319 this year, .399 wOBA in Triple-A vs .394 this year.

Zach Eflin (SP-PHI) dazzled again, this time going the distance against the Royals in a complete game shutout; he allowed 4 hits and walked none while recording 7 punchouts. Eflin now boasts a 2.46 ERA and 1.02 WHIP on the season, but a 4.41 xFIP indicates that some regression lies ahead based on a .259 BABIP for opposing batters and an inflated 86% strand rate. While his 1.24 BB/9 is stellar, his 6.71 K/9 isn't. But opposing hitters have mustered just a 24.2% hard-hit rate against him, with just 14.1% of batted balls being liners. So, there's something of a mixed bag here but the results over his last 3 starts have to speak for themselves - 2 runs and 2 walks allowed over his last 25 innings pitched.

Jordan Lyles (SP-PIT) continued his strong start to the 2019 season with 6 innings of 1-run ball against the Cardinals on Saturday; he gave up just 1 hit and walked 3 while whiffing 6. In putting together such an outing, Lyles continued to defy the underlying metrics (such as a 4.49 xFIP) which suggest that regression to the mean is coming. A suppressed .245 BABIP allowed and inflated 84.7% strand rate help keep his surface numbers looking good, but his shaky control (3.49 BB/9) and low 7.1% HR/FB suggest that some rocky outings lie ahead. But then opposing batters have mustered just a 29.5% hard-hit rate against him, raising the question of whether Lyles is making some of his good luck.