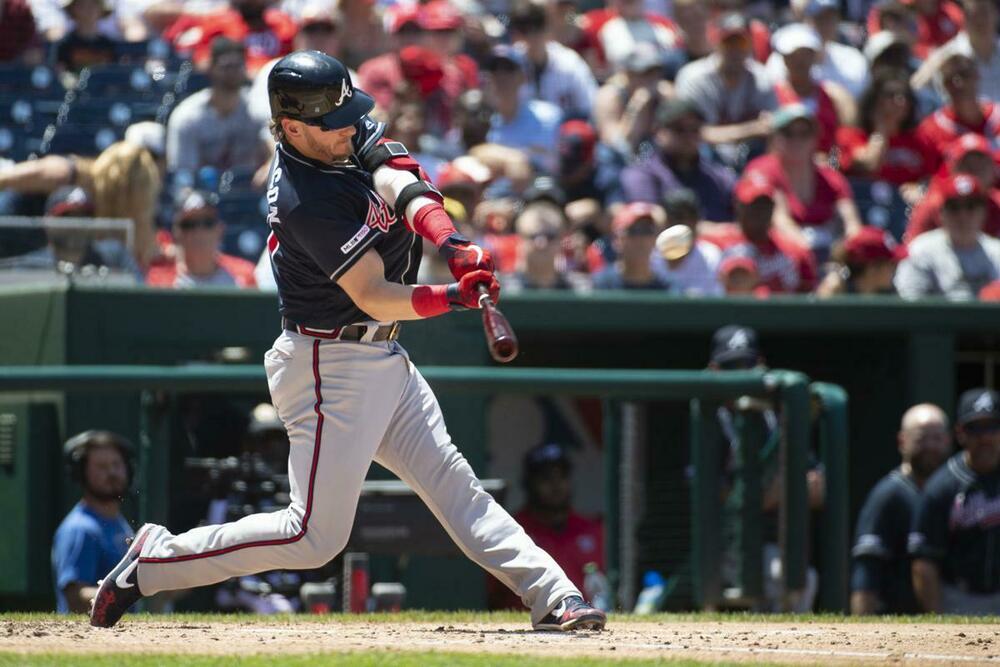 Braves Rotation - There are currently a lot of moving parts in the Braves rotation. Mike Foltynewicz being sent to AAA after another awful start on Saturday, and then Mike Soroka left Sunday's game after just two innings after being hit on the right wrist with a pitch. For Soroka, initial x-rays came back negative and he should be able to make his next start, but the team doubts he'd be ready to pitch in Folty's spot on Thursday which leads them to still need to make a move. Bryse Wilson is the candidate that matches up as he pitched Saturday as well, but this could lead to an extended look in the rotation again for Sean Newcomb as he's currently rehabbing in AAA after being placed on the 7-day concussion IL. Newcomb has pitched well since being moved to the bullpen but was off to a slow start before getting hit in the head with a line drive in his last start.

Brandon Woodruff, Milwaukee Brewers - Brandon Woodruff struck out 12 batters over 7.0 innings to pick up his ninth win of the season. He allowed three runs over those seven frames which brought his ERA down slightly to a 4.01 for the year. His FIP though sits almost a full run lower at 3.05 and his SIERA splits the difference at 3.66. Woodruff has quality starts in three of his five June starts, and his ERA was thrown haywire by six-run, four-inning outing on June 1st. He's stayed fairly steady over the next five starts, though he has allowed three or four runs in each of those outings. He has an 11.2% swinging strike rate for the season and he had 16 whiffs on 103 pitches with another 15 called strikes. He's an excellent starting option, even if he's bound to allow a few runs every time out.

Josh Donaldson, Atlanta Braves - Josh Donaldson launched his 15th homer of the season while going 2-for-4 at the plate. Donaldson had a cold month of May despite an excellent batted ball profile as he was hurt by an 11% HR/FB%, and he's caught fire in June with a 131 wRC+ and eight homers. Donaldson's average exit velocity is 93.1 MPH and he's in the top 2% of the league and his barrel rate is almost 15%, also ranking in the top 8% of the league. His RBI totals aren't nearly as high as we'd like to see, but that's a product of Freddie Freeman doing Freddie Freeman things and has 61 RBI on the year, and Ronald Acuña and Dansby Swanson also have high RBI totals in the number one and two spots in the lineup. Donaldson is everything that the Braves were hoping he'd be and is going to be an outstanding fantasy asset over the rest of the season.

Jordan Yamamoto, Miami Marlins - Jordan Yamamoto allowed two runs over five innings, his first two runs allowed in his brief MLB career, and struck out seven batters for the second straight outing. He picked up his third win of the season in the effort. Yamamoto isn't generating a ton of swinging strikes despite his solid K%, but he's also benefiting from an extremely low BABIP on a near 50% hard-hit rate. Through his first two starts, he had a 100% strand rate, which started to come back down in this outing as he stranded just 66% of his runners and his 34% groundball rate doesn't exactly bode well for continued success if he's giving up hard contact at this high a rate. Proceed with a bit of caution here.

Joey Votto, Cincinnati Reds - Joey Votto went 3-for-3 with a walk and his seventh homer of the season Sunday. Votto has slowly been climbing back from his awful start and is sitting at a 100 wRC+ for the season, but his counting stats are abysmal. He's hit just those seven homers and has only 19 RBI on the season with one chipped in steal. His batted ball profile is just awful, but at least he's providing some usefulness in OBP leagues with a .356 OBP. While that isn't the typical Votto .400+ OBP, it's still a solid one overall but he's hard to roster at this point even though it's hard to justify flat out dropping him.