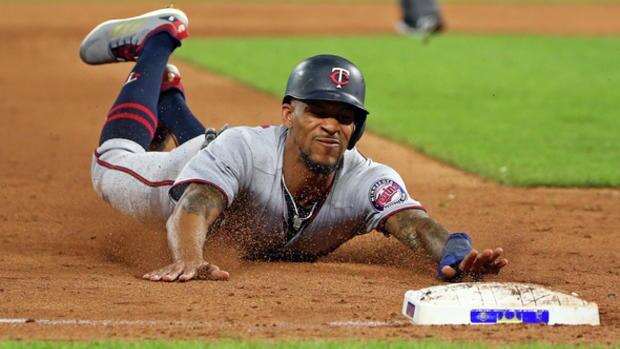 Byron Buxton (OF-MIN) stayed red hot as he went 5-5 with a homer, 2 doubles, and a stolen base against Cleveland on Wednesday. The 27 year-old is nicely building upon his encouraging 2020 campaign and is now batting a robust .438 to go along with 8 longballs, 14 RBI, 14 runs scored, and 2 stolen bases through his first 68 plate appearances of the 2021 campaign. He's slashed his strikeout rate to 21% (29% career) while making hard contact at an insane 62% per Statcast after posting a career-best of 48% in that category last season. Buxton's contact rate (70%) is actually slightly down from his career average (71%) and his swinging-strike rate (17%) is up slightly from his career average (15%), so it's clearly quality of contact - not quantity - that is driving his surge. Obviously, a .476 BABIP is unsustainable, so expect his average to regress toward the .260s as the season progresses. Overall, though, it seems that Buxton is finally having his breakout season. His fantasy owners will just have to hope that he can stay on the field.

Domingo German (SP-NYY) dominated the Orioles on Wednesday as he blanked them over 7 innings in which he scattered 3 hits and a walk while fanning 6. The 28 year-old righty tossed 63 of his 92 pitches for strikes in the contest. He has been solid to begin the season, as he now owns a 4.05 ERA, 8.6 K/9, and 1.8 BB/9 through his first 4 starts (20 innings). His 4.05 xFIP indicates that he's been as good as the ERA suggests, with a solid 12% swinging strike rate and 46% groundball rate contributing to his success so far in 2021. However, there is reason for concern given the 47% hard-hit rate that opposing batters have logged per Statcast. Moreover, opposing hitters have logged a 76% contact rate against German, which comes in above his 72% career clip. German lines up for a start at home against Houston next week.

J. A. Happ (SP-MIN) largely held Cleveland in check on Wednesday as he gave up just 2 runs on 4 hits and a walk while striking out 3 over 7 innings of work. The southpaw tossed 63 of his 96 pitches for strikes and surrendered a solo bomb in the contest. Happ now owns a solid 1.96 ERA on the year, but that comes with a K/9 of just 5.1 and a BB/9 of 2.7 while his xFIP should raise eyebrows at 5.36. Happ's strand rate currently stands at 86%, which is well above his career average of 75% while opposing batters own a BABIP of just .154 against him. The 38 year-old hasn't missed many bats (6% swinging-strike rate) while surrendering a career-high 87% contact rate to the opposition. However, hitters have mustered a modest 36% hard-hit rate against him. Overall, expect considerable correction to the mean with him going forward. Happ lines up for a start at home against the Rangers next week.

Nick Pivetta (SP-BOS) tossed 5 shutout innings against the Mets on Wednesday, allowing just 1 hit and walking 3 while piling up 7 punchouts. He was not especially efficient, as he needed 93 pitches - 55 of which he tossed for strikes - to get through 5 innings. The 28 year-old is attempting to turn his career around in Boston with mixed results after he flamed out in Philadelphia. While Pivetta owns a 2.81 ERA and 8.8 K/9 after Wednesday's outing, that comes with a 6 BB/9 and 4.93 xFIP. The control issues persisted in this contest, but were mitigated by Mets hitters struggling to use their bats. While it's encouraging that Pivetta's average fastball velocity is back up to 95 mph after it sat at 93 last year, expect some correction to the mean going forward - a .233 BABIP (.321 career), 79% strand rate (69% career), and 4% HR/FB (18% career) are all uncharacteristic. He does line up for a juicy matchup with the terrible Tigers early next week, so I would run him out there for that one at least.

Logan Allen (SP-CLE) got chased early by the Twins on Wednesday, as he got shelled for 6 runs on 5 hits and a walk over just 1.1 innings of work. He threw just 26 of his 52 pitches for strikes and struck out just 1 batter while surrendering 3 longballs in the contest. There was a bit of hype surrounding the 23 year-old southpaw during spring training, as he impressed in camp after shedding weight thanks to a new diet as well as adjusting his pitching mechanics and delivery during the offseason. However, the results have been disastrous in the early going, as Allen now owns a 9.91 ERA, 6.9 K/9, and 4 BB/9 through his first 5 starts (15.2 IP). His 5.27 xFIP points to a bloated 39% HR/FB and low 57% strand rate inflating his ERA a bit, but there is no denying that Allen has downright struggled with his control as well as command as opposing hitters have made plenty of hard contact (41%) against him. Because of his struggles, the club announced after the start that he will be optioned to its alternate training site. So, if Allen is somehow still on your fantasy roster, he can be safely dropped until he recaptures some semblance of his spring dominance (if he does).