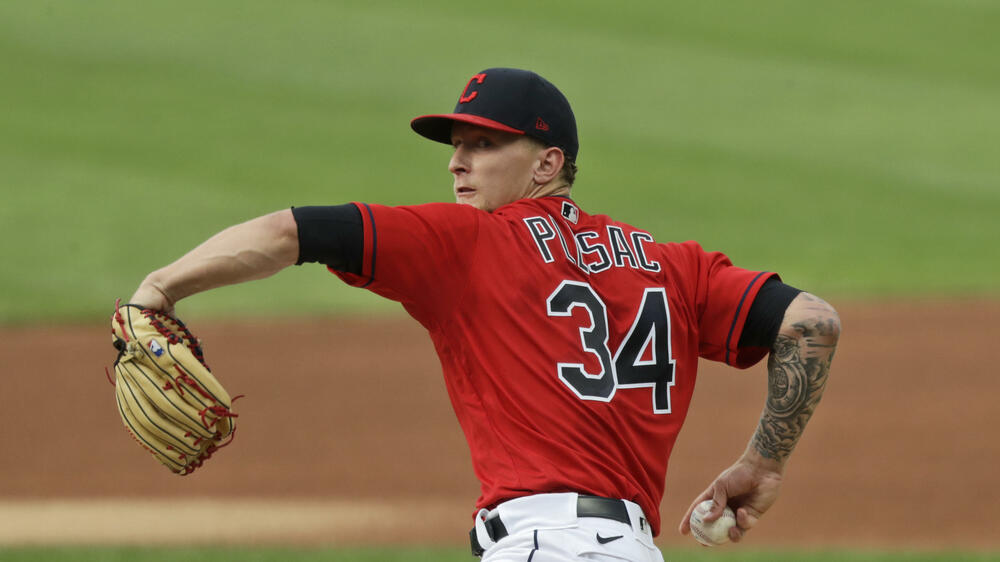 Zach Plesac (SP-CLE) earned a quality start against the Tigers on Saturday, as he tossed 6 innings of 2-run ball in which he scattered 6 hits and a pair of walks while recording 4 punchouts. The 26 year-old stumbled a bit out of the gate with a 2-run first inning, but recovered nicely. He was high on many fantasy draft sheets this season after logging a 2.28 ERA, 0.80 WHIP, 9.3 K/9, and 1 BB/9 across 55.1 IP (8 starts) last season. A 3.50 xFIP indicated that he benefited from some good fortune - especially a .224 BABIP and 92% strand rate - but he does possess a nice combination of modest strikeout ability and strong control. He lines up for a rematch with the Tigers - this time at home - next week and should be an auto-start, especially since he did perform better in Cleveland than on the road last season.

Corey Kluber (SP-NYY) lasted just 4 innings against the Jays on Saturday, as he surrendered 2 runs (1 earned) on 5 hits and 3 walks while striking out 5. The soon-to-be 35 year-old sat at 89-90mph with his heater as he leaned heavily on his cutter and curveball to induce outs; his average fastball velocity sat at about 92-93 throughout his career. The outing was encouraging, though, from the standpoint that Kluber tossed just 1 inning with the Rangers last season after pitching just 35.2 IP with Cleveland in 2019. And it was nice to see him fan some batters despite the low velocity, although it came with control issues (his career BB/9 is just 2). Kluber lines up for a start on the road against the Rays next week, and it's difficult to start him with much confidence in that one. But then again, if you drafted him you must have some hope that he can perform, so do what you have to.

Yordan Alvarez (DH-HOU) mashed against Oakland on Saturday, as he went 3-5 with a homer, 3 RBI, and 2 runs scored. The 23 year-old is now batting .385 with that one dinger and 6 RBI through his first 15 PA of the young campaign. After he missed the bulk of the 2020 campaign because of a knee injury that required season-ending surgery. So, it seems that any remaining concerns about his ability to return to form in 2021 can be put aside as he's started the year strong. The only real knock that anyone can have on the youngster is his lack of defensive ability, as he's relegated to the UTIL slot for fantasy purposes. But the 2019 Rookie of the Year swings the bat so well that he should more than adequately fill that spot. Saturday's big fly was likely the first of 30 or more he will hit this season while logging a healthy average north of .275. Enjoy the ride if he's on your roster.

Eddie Rosario (OF-CLE) hit his first dinger in a Cleveland uniform on Saturday as he went 1-1 with a solo homer, a pair of walks, and drove in a second run via a sac fly against Detroit. The 29 year-old has been one of the few bright spots so far for the Cleveland offense, as he's now 2-5 with a homer, 2 RBI, and 2 walks through the team's first two games (both losses). After putting together a productive 2020 campaign in Minnesota (.257 average, 13 dingers, 42 RBI, and 3 steals), he endured a rough spring training before settling into the cleanup spot to start the season in Cleveland. There's little to analyze so far, but the returns to date indicate that there is no reason we should expect anything but the usual from Rosario - likely an average north of .270 to go along with 30ish big flies when it's all said and done.

Tanner Houck (SP-BOS) was effective against the Orioles on Saturday, as he allowed 3 runs (2 earned) on 6 hits and a walk while racking up 8 punchouts over 5 innings of work. The 24 year-old made his MLB debut last season after tossing only 25 IP in Triple-A back in 2019. Across 3 starts (17 IP), he recorded a 0.53 ERA, 0.88 WHIP, 11.1 K/9, and 4.8 BB/9, with a 3.73 xFIP pointing to a .161 BABIP and 96% strand rate suppressing his ERA. While his track record suggests that he does have some K potential (which he showed on Saturday), he does have a history of significant control issues that could reduce his fantasy potential. He is in line for a rematch with the Orioles next week (on the road next time), and that's a real risk-reward play. If you need a streamer you could do worse.