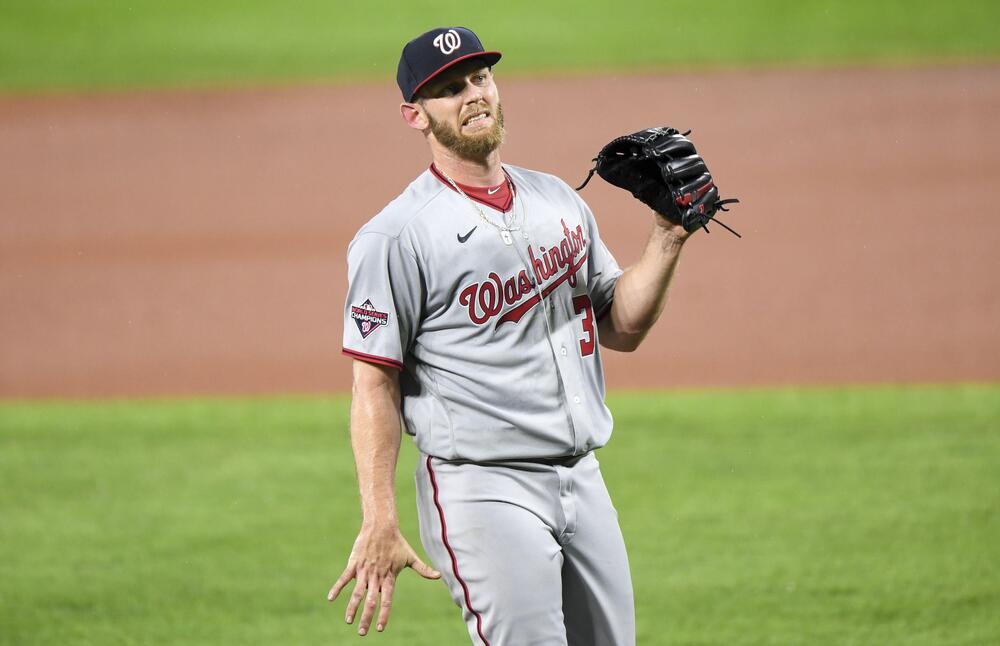 Stephen Strasburg (SP-WSH) was scratched from his scheduled start on Sunday and placed on the 10-day IL with right (throwing) shoulder inflammation. The 32 year-old was seen clutching that shoulder during his last start, when he coughed up 7 runs on 8 hits and 5 walks while striking out 3 over 4 innings of work against the Cardinals. He also gave up 3 dingers in that outing. It's anyone's guess how many starts Strasburg will miss, and it's definitely a concern given his injury history and the fact that since the start of the 2020 campaign he has made only 4 total starts covering 15 innings. His average fastball velocity - once elite at 96mph and higher - was only 92 last season while dipping toward 91 to start the current campaign. Strasburg started the year off strong with a quality start (0 runs on 1 hit and 2 walks with 8 strikeouts over 6 IP against the Braves back on April 7), so his fantasy owners have to hope that he can recover quickly and return to the form he showed just a couple of weeks ago.

Aaron Nola (SP-PHI) tossed a complete-game shutout against the Cardinals on Sunday, coming oh-so-close to perfection by allowing just 2 hits and walking none while piling up 10 punchouts. He tossed 73 of his 109 pitches for strikes in the contest. The 27 year-old is cementing himself as one of the top 10 starters in baseball, as he now owns a 2.19 ERA, 10.2 K/9, and 1.1 BB/9 through his first 4 starts (24.2 innings) to start the 2021 campaign. Nola's 3.11 xFIP points to an 81% strand rate (76% career) and 4.3% HR/FB suppressing his ERA a bit, but overall his peripherals support his performance to date. Despite his average fastball velocity sitting at about 1mph below what it's been the last 3 seasons, he's recorded a solid 12% swinging-strike rate while keeping contact to a modest 77% clip and inducing groundballs at a decent 46% clip. Nola lines up for a start on the road at Colorado next week and there isn't really any question that his fantasy owners are starting him against anyone, anywhere, is there?

Alex Wood (SP-SF) was activated from the IL to make his first start of the 2021 campaign; he was expected to be in the Giants' opening-day rotation but had to undergo a procedure to treat a lower back issue. He earned the win against the Marlins, as he tossed 5 scoreless innings in which he allowed 3 hits, walked none, and struck out 4. Wood tossed 42 of his 61 pitches for strikes in the contest. The 30 year-old made only 2 starts for the Dodgers last season while also making 7 relief appearances. The results were not great, as he finished the abbreviated season with a 6.39 ERA, 10.7 K/9, and 4.3 BB/9 across 12.2 innings of work. His 5.69 xFIP confirms that he was not good. However, Wood has always intrigued for fantasy purposes and he was productive as recently as 2018. Especially given his home park, there is reason to keep an eye on him. Wood is slated to take on the Marlins at home next week and I would not blame you if you picked him up for the start.

Trea Turner (SS-WAS) went 2-4 with a pair of solo homers against the Diamondbacks on Sunday. The 27 year-old is putting together a strong 2021 campaign, as he now owns a .308 average to go along with 4 homers, 7 RBI, 7 runs scored, and 3 stolen bases through 56 plate appearances. While his strikeout rate is high at 21% (18% career) and he's not taken many walks (5% walk rate in 2021, 8% career), he's absolutely mashing with a 49% hard-hit rate per Statcast. It's worth noting that he's ripped lots of worm-burners (51%) while lofting just 24% flyballs; with a 13% HR/FB for his career, his current 22% clip seems likely to regress. Ultimately, Turner's ability to hit for a nice average (his .333 BABIP is actually a touch below his .339 career clip), nice wheels, and modest power entrench him as a top 5 fantasy option at SS.

Colin Moran (1B-PIT) went 2-5 with a longball, a 2B, and 4 RBI against the Brewers on Sunday. The 28 year-old is very quietly (nobody, after all, watches the Pirates) emerging as a fantasy producer, as he now owns a .298 average to go with 4 longballs and 13 RBI through his first 65 plate appearances of the 2021 campaign. This comes after a 2020 season in which he posted a .247 average, 10 homers, and 23 RBI across 200 plate appearances. This year, his strikeout rate is a bit high at 31% (22% career) while he's taking lots of walks (12%) and is hitting the ball with some authority (43% hard-hit rate per Statcast). Moran has laced liners at a ridiculous 42% clip that will inevitably regress, but it's worth noting that he smashed the ball last season (47% hard-hit rate) while logging a career-high 56% groundball rate. But this year his average launch angle is up to 14 from 8 while his barrel rate has climbed from 13% in 2020 to 15% so far. If you need to plug someone in at 1B or MI, consider Moran.