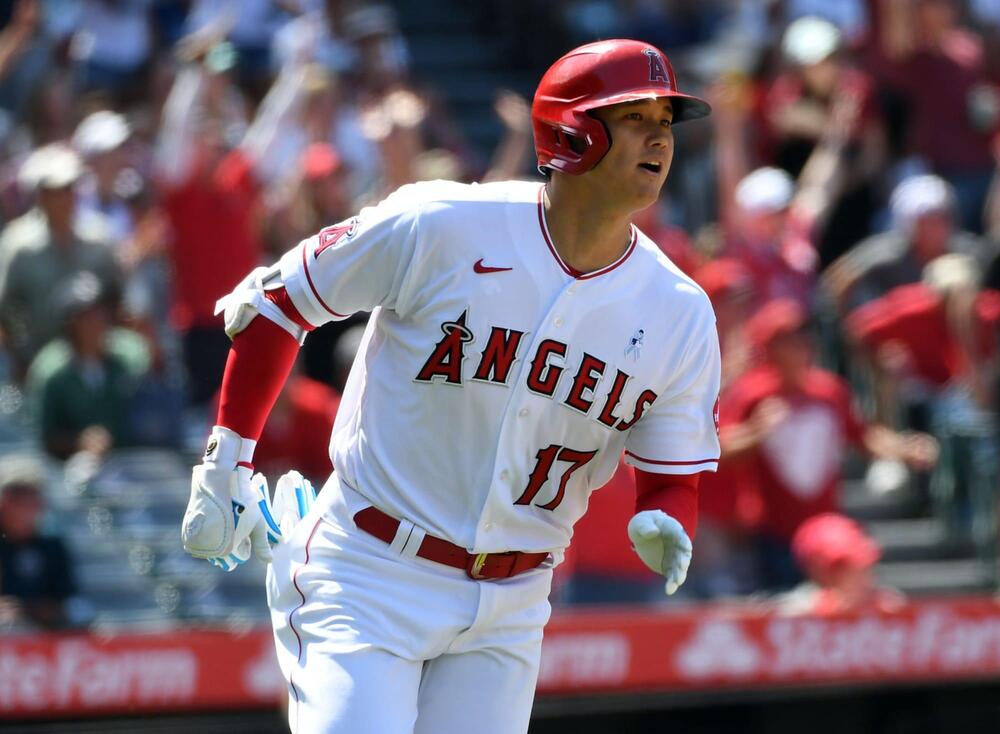 Shohei Ohtani (DH-LAA) went 3-4 with a double, a triple, a homer, a walk, a stolen base, 2 runs scored, and 3 RBI against the Rays on Sunday. The 26 year-old is breaking out in a big way in 2021 as he now owns a .277 average to go with 25 longballs, 59 RBI, and 11 stolen bases across 292 plate appearances. Perhaps unsurprisingly, the key to his success has been a significant uptick in hard contact, as Statcast shows a career-best 56% hard-hit rate to go along with an average exit velocity of 93.5mph. He's also raised his launch angle to 16.4 and posted a barrel rate of 24%; both of those are, you guessed it, career highs. Ohtani, moreover, has logged his lowest groundball rate to date (39%) while lofting more flyballs than ever before (40%) and smoking liners at a healthy 21% clip. He has swung and missed a good bit (16%) and that has contributed to his 29% strikeout rate, but he's absolutely punished the ball when he has put the bat on it. If anything, his .313 BABIP is a touch low compared to his career rate (.325), so that .277 average could possibly rise a little bit going forward.

Adolis Garcia (OF-TEX) went 2-4 with a triple, a run scored, and an RBI against the Royals on Sunday. The 28 year-old just continues to produce, and he now owns a .279 average to go with 20 homers, 55 RBI, and 7 stolen bases on the year. Sure, the combination of a 30% strikeout rate and 5% walk rate is problematic. But his average rides on a .331 BABIP that doesn't seem astronomical, especially for a guy with plus-plus speed. Unsurprisingly, hard contact has been a key to Garcia's success, as Statcast shows a 47% hard-hit rate to go with an average exit velocity of 92mph, a launch angle of 12.6, and a barrel rate of 16%. Garcia's 29% HR/FB does seem unsustainable, so the smart money says that his fantasy owners shouldn't expect him to continue to mash homers at this rate going forward. After all, he's a somewhat groundball-oriented hitter (44%), which bodes well for the average but not for power output.

Tarik Skubal (SP-DET) tossed 7 strong innings against the Astros on Sunday, giving up just 1 run on 1 hit and 3 walks while racking up 9 punchouts. The 24 year-old southpaw fired 62 of his 102 offerings for strikes in the outing. The performance leaves Skubal with a 4.06 ERA, 10.9 K/9, and 4.2 BB/9 through his first 14 starts (77.2 innings) of the season. His 4.40 xFIP points to his ERA benefitting from an 84% strand rate, although, on the other hand, his 17% HR/FB could be a bit high. The walks are obviously a concern, and Skubal has given up hard contact at a 45% clip per Statcast while opposing hitters have hit 22% liners and 48% flyballs. So, that HR/FB may not actually be high after all. There is reason to suspect that Skubal really is a mid-4s ERA pitcher in 2021 and could struggle a bit here and there thanks to the combination of hard contact and control issues. He lines up for another challenging matchup - this one at home against the White Sox - next week.

Eduardo Rodriguez (SP-BOS) earned the W against the Yankees as he allowed 2 runs on 5 hits and no walks while fanning 8 over 6 innings of work. The 28 year-old southpaw threw 62 of his 96 offerings for strikes and surrendered a homer in the contest. It was an encouraging performance for Rodriguez, who has had a rough start to the 2021 campaign overall. He now owns a 5.83 ERA, 10.6 K/9, and 2.2 BB/9 across his first 15 starts (78.2 innings) of the season. His 3.36 xFIP points to a lot of bad luck - namely a .374 BABIP (.307 career), 62% strand rate (74% career), and 15% HR/FB (12% career) inflating his ERA. Statcast indicates that he has surrendered hard contact at a modest 35% rate and opposing hitters have logged an equally modest average exit velocity of 88mph against him. I'd expect the correction to the mean to continue going forward. Rodriguez lines up for a start in Oakland next week.

Adley Rutschman (C-BAL) has been playing well in Double-A ball in 2021 after skipping the High-A level and is expected to make his MLB debut later this season. Through 209 plate appearances on the year, the 23 year-old was hitting .285 with 11 homers, 32 RBI, and 34 runs scored entering Sunday's action. As was the case in his professional debut back in 2019 - and to an even greater degree, actually - Rutschman is showing an elite eye at the plate and tremendous discipline, as he's drawn walks at an excellent 19% rate while fanning at just a 16% clip. His production in 2021 is all the more encouraging when you consider that the 2019 first-overall pick totaled less than 200 plate appearances in the lower levels of the minors before the COVID pandemic scrapped the 2020 minor-league season. So, what we are seeing in his biggest professional sample size to date in 2021 hints that Rutschman should be a fantasy contributor before too long. He was already polished behind the plate when he was drafted, and his bat - which includes hit and power tools that should both play above-average at the major-league level - was fairly advanced as well. He likely won't contribute much in fantasy in 2021, but he very well could in 2022.