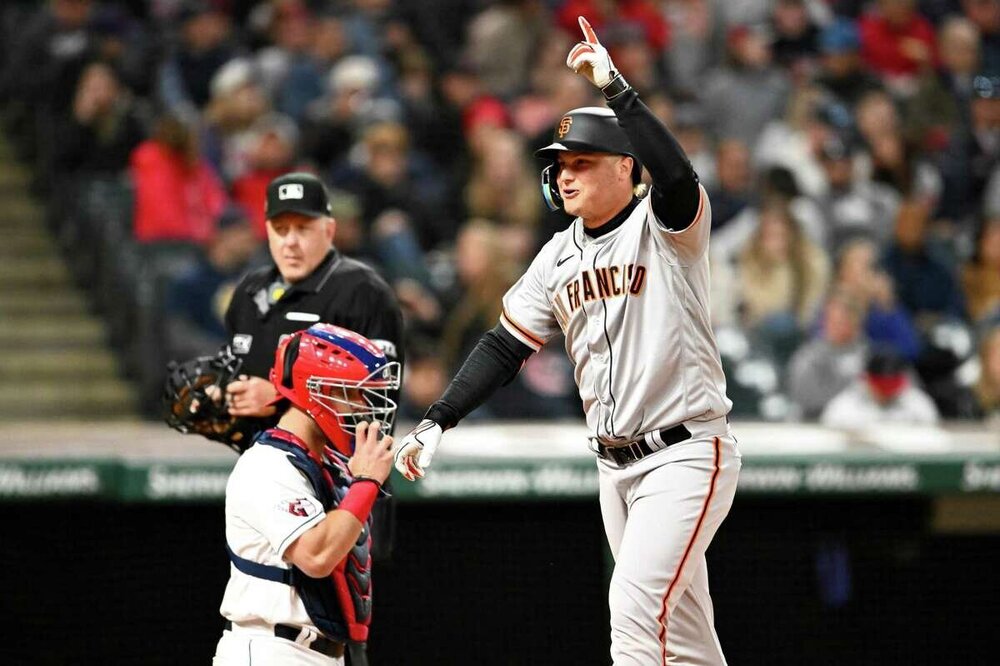 Joc Pederson (OF-SF) went 1-2 with a 2-run homer and a pair of walks against the Mets on Wednesday afternoon. The 30 year-old has been red-hot as of late, going 5-8 with 4 dingers and 10 RBI over his last two games, raising his season average to .260 to go with 11 big flies and 24 RBI across 118 plate appearances. Pederson has blistered the baseball to the tune of a career-high 46% hard-hit rate while trimming his strikeout rate under 20% and making contact at a career-best 80% clip. Curiously, his .222 BABIP is low (.260 career), which suggests that, if anything, his average could climb a little if he continues to make lots of loud contact and keep the strikeouts down. Given his regular role and overall productivity in 2022 - as well as his ability to go on absolute heaters that can go a long way toward winning weekly head-to-head matchups - Pederson should be owned in far more leagues (he's currently on the wire in over 35% of ESPN leagues).

Franmil Reyes (OF-CLE) did not start against the Astros on Wednesday. The 26 year-old slugger has absolutely scuffled across his first 145 plate appearances of the 2022 season, as he owns a .195 average to go with just 3 dingers and 12 RBI. His strikeout rate is up quite a bit to 39% (30% career) and his walk rate is down a little (7%, 9% career), although the hard contact is still there (43%). His HR/FB is way down (12% in 2022, 28% career), which seems likely to correct as the weather warms up, but the arrival of summer alone seems unlikely to cure his strikeout woes. Part of the problem there seems to be that he's taking too many called strikes, as his swinging-strike rate has stayed steady at a blah 16% while he's taking called strikes at a 19% clip, up from his career rate of 15%. His fantasy owners should probably hold him for a bit longer given his power potential, but he's got to be on the bench until he again shows signs of life.

Julio Urias (SP-LAD) took a tough L against the Nationals on Wednesday as he fired 6 innings of 1-run ball in which he allowed 4 hits, walked 3, and struck out 3. The 25 year-old southpaw threw 54 of his 87 offerings for strikes in the game. Urias has been effective but unimpressive so far in 2022, as he owns a 2.49 ERA, 6.5 K/9, and 2.1 BB/9 across 9 starts (47 IP). His 4.29 xFIP does indicate that a .241 BABIP (.280 career) and 78% strand rate (76%) career are inflating his ERA a bit, but perhaps the biggest knock on his game is the lack of punchouts (8.9 K/9 career). His average fastball velocity is down more than a full tick (under 93mph) while he's simply not missing bats like usual (swinging-strike rate under 10 in 2022, over 11% the last 3 seasons). He does line up for a favorable turn at home against the Pirates early next week but there is reason for concern that his ERA will climb going forward.

Jakob Junis (SP-SF) earned the W against the Mets as he allowed 2 runs on 3 hits and a walk while striking out 4 over 6 IP. The 29 year-old righty allowed a homer as he threw 52 of his 86 pitches for strikes in the contest. Junis has been effective if underwhelming through his first 32.2 IP of the season, with a 2.76 ERA, 6.6 K/9, 1.4 BB/9, and 3.54 xFIP. A suppressed .239 BABIP and inflated 83% hard-hit rat are keeping his ERA down a bit, but overall Junis has done a good job of limiting baserunners and is getting opposing hitters to chase a bit more than usual (34% o-swing%), which is helping the swinging-strike rate (11%) and helping to keep the hard-hit rate down to just 27%. He lines up for a start in Philadelphia early next week against a team that has largely struggled to score runs as of late.

Aaron Ashby (SP-MIL) allowed 1 unearned run on 4 hits and 3 walks while striking out 5 Paderes over 5.2 IP on Wednesday. The 24 year-old lefty threw 59 of his 91 pitches for strikes in the contest. Ashby has shown control problems all season long (5.3 BB/9), but also nice strikeout potential (10.3 K/9) while logging a nice 2.91 ERA across 34 innings of work (4 starts, 6 relief appearances). Overall, he's done a good job of limiting hard contact (27%) while missing bats at a decent clip (12% swinging-strike rate) and inducing tons of grounders (66%). He lines up for a turn in Chicago against the Cubs next week and given the Brewers' recent success with turning out high-caliber starters for fantasy, you have to like Ashby's odds of developing into a good one.

Tweets by Fantistics
A Pep in Kep's Step - May 24, 2022
Hot hitters and pitchers