Jason Heyward (CHC) - Jason Heyward had a nice day at the plate on Saturday, going 2-for-4 with 2 doubles and an RBI. Heyward is still working back from his latest injury, a ribcage contusion he sustained after colliding with the wall while making a catch. Heyward's long history of minor injuries is an annoyance to fantasy owners, especially when their outfielder is only hitting .224 on the season. Heyward has managed a terrible 19.1% hard hit rate on the year and continues to hit about half of his batted balls on the ground. That's not a recipe for a high batting average or a lot of power (or any at all). Hitting fly balls at a rate lower than his career average and pulling his batted balls at about he same clip as he has always, there's really not a lot of optimism to see him add to his single home run in the near future.

Jonathan Lucroy (MIL) - Jonathan Lucroy continues to swing a hot bat for the Brew Crew, hitting his 8th homer of the season and 2nd in 2 days. Lucroy and the Brewers had a 6-game roadtrip in pitcher friendly ballparks over the last week, so we should see this offense start to heat up now that they're back in the hitting friendly Miller Park. As a catcher, Lucroy will never be able to play everyday, but he has quickly established himself as a top-3 option at the position this season. Lucroy has already surpassed his home run total from 2015 and a big reason is due to a shift in his batted ball types. After hitting flyballs just 29% of the time in 2015, Lucroy is now not only back around his career levels of 35%, he's actually hitting flyballs about 43% of the time. Pair this with a steady 34% hard hit rate and it's no wonder he's currently on pace for the most homeruns of his career.

Jonathan Villar (MIL) - Villar wasn't able to figure out Alredo Simon on Saturday, going 0-for 4 and failing to register a hit for just the 4th time in May. The good news is that he gets another favorable matchup against the left-haneded Brandon Finnegan on Sunday. Villar has a wOBA against left-handed pitching about 130 points higher than versus right-handed pitching and we should see him in the leadoff spot again. Over the last week, Villar has 4 multi-hit games and also has 5 extra-base hits over the stretch. He's an excellent option on both DraftKings and FanDuel on Sunday, but with a $4,400 price tag on the former, he's a bit better value over there than at $4,000 on FanDuel.

Buster Posey (SF) - Buster Posey has always been a great hitter in Colorado and that trend continued on Saturday when he hit a couple 3-run homeruns. Posey finished the day 2-for-5 with the 6 RBI from his home runs. On the season, Posey has started out a little sluggish on the offensive side of things. Despite the big day, the catcher is still hitting just .268/.328/.470, but considering the .266 BABIP and career high 38% hard hit rate, it seems some of his struggles can be associated with poor luck. Look for Posey to turn things around as the weather heats up, but he's still likely to do most of his damage on the road considering the homerun-suppressing marine layer that plagues AT&T Field in the summer months. If he's in the starting lineup tomorrow, he's the top overall option at catcher in DFS leagues, while facing a left-handed pitcher. Posey is priced up at $5,200 on DraftKings, but is a more affordable $4,100 on FanDuel.

Carlos Gonzalez (COL) - Everybody and their mother was on Carlos Gonzalez last night against Matt Cain, yet tonight against Madison Bumgarner, most people shied away. So what happened? Exactly what you'd think would happen in this great game of ours. CarGo took advantage of Madison Bumgarner's inefficient outing by homering off Bumgarner's replacement, Josh Osich, in the 7th inning on Saturday after going just 1-for-4 with a single last night. Looking towards Sunday's action, CarGo is again an interesting option at home against the right-handed Johnny Cueto. While Cueto seems to have re-gained his form this year, he's a pitcher that relies more on movement on his pitches than pure velocity, making his repertoire in danger in the thin air of Colorado where breaking pitches tend to lose their bite. CarGo is just $3,500 on FanDuel and $4,100 on DraftKings. 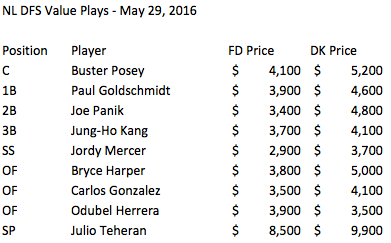