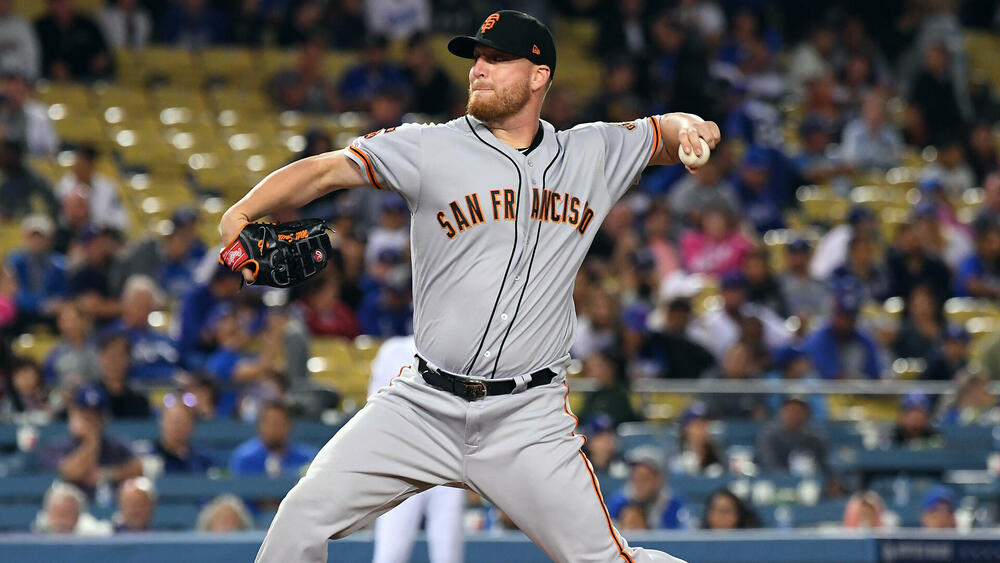 Welcome to the first official edition of A Closer Look of the second half! As I wrote about two weeks ago and touched on in last week's first half awards ceremony, the trade deadline is looming and will be upon us in just under two weeks. There are several big name closers on the market and likely to be dealt, so today we'll focus heavily, not on the reliever being traded, but on the overall team bullpen picture without the closer involved.

We'll start with the hardest situation to predict, since Will Smith, Tony Watson and Sam Dyson are all drawing trade interest and potentially could all be on the move. Because of this, it's tough to recommend going out of your way to pick up Watson or Dyson in the event of a Smith trade. Luckily, there's a fourth arm in this bullpen who is under team control for four more years, has flirted with mixed league value all season, and likely is destined for a late-inning, high leverage role. The suspect? Reyes Moronta, a 26 year-old fireballer with a great fastball that he complements with a solid slider. The biggest concern for Moronta in 2019 is usage. He's already at 44.1 innings pitched, and just 20.2 innings away from last season's total (and his career high at any level). To further complicate matters, the Giants are surging and have won 9 of their last 10 games, putting them just 2.5 games out of the wild card. Will this hot streak prevent the Giants from breaking up their relief corps? My guess is they still move one of two relievers, but without the aforementioned trio being traded, Moronta will likely still be an understudy for saves.

Current closer Sergio Romo seemed to have one foot out the door in draft season, but almost the entire bullpen seems to be drawing interest lately with Marlins beat writer Joe Frisaro reporting recently that Austin Brice, Jarlin Garcia and Nick Anderson as all players drawing interest from other teams. Like San Francisco, there are so many moving parts here that speculating on who will be left in the bullpen on August 1st is a near fruitless exercise. My official advice is not to waste a roster spot on anyone but Sergio Romo, but if you're an NL-only league, the rising 29 year old Nick Anderson has the most appealing arm of the bunch.

Of this list, Ken Giles might be the biggest headliner of the group, assuming he proves he's over the nerve inflammation he dealt with the last couple weeks. The question is whether a contender will be willing to look past his 2017 post-season meltdown to pay market value for him. Should they find a suitor, Daniel Hudson or Joe Biagini would both be in the mix for saves. Biagini has make signficiant improvements this season and is in line to become the team's primary closer. Biagini upped his swinging strike rate this year and paired it with more chases outside the strikeout and consequently, this has led to lower contact rates across the board. As a heavy groundball pitcher and now a strikeout arm, Biagini might be a sneaky good option in the second half. Meanwhile Daniel Hudson has been used in higher leverage situations than Biagini this year, but his skillset is less enticing due to his excessive walks. How the Jays decide to deploy the duo is anyone's guess, however.

The Orioles will almost certainly be sellers over the next two weeks and included in that group will be pseudo-current closer Mychal Givens. Givens doesn't exactly have a stronghold on the job, so Shawn Armstrong should probably already be owned in leagues where any save on the waiver wire is valuable. Armstrong isn't a particularly exciting bullpen arm and his situation is one of the worst in the MLB for opportunities, but he could see the lionshare in the event of a Givens deal. Armstrong walks too many batters and gives up too much contact, but he has been a bit unfortunate with a 68% strand rate, so at least he can hang his hat on that.

Shane Greene got off to an extremely quick start for the 2019 season, but has since slowed down considerably, partially due to the struggles of the Tigers bullpen. Greene likely won't land in a situation where he would close, and the Detroit bullpen has been pretty awful outside of him this season. Joe Jimenez has long been tagged as the closer-in-waiting, but while he has the strikeouts to justify it, he's far too hittable and gives up too many flyballs - a combination which has resulted in an ugly 2.06 homeruns per nine innings this season. He's worth adding in mixed leagues, but temper your expectations.

The Mariners bullpen has been a mess since Hunter Strickland went down shortly after the start of the season, but Roenis Elias has come in and managed to stabilize the bullpen. Fantasy owners were slow to buy into the former starting pitcher as closer, but until this past week, he had settled down and was pretty effective. Elias probably won't be too expensive, so he might be a cheap addition to a contending team, but he almost certainly won't land anywhere that will see him serve as closer. There's a chance Strickland, who has been throwing live batting practice, could return before the trade deadline. In that scenario, it would allow the team to assess Strickland's readiness to contribute before pulling the trigger on an Elias deal. By the end of the season, we do expect Strickland to assume the closer role for the Mariners - with or without a trade involving Elias.

The Kansas City Royals have a surprisingly solid bullpen this season and both Ian Kennedy and Jake Diekman could attract suitors over the next two weeks. Former closer Wily Peralta would be the most likely candidate to land back in the closer role upon the trade of the top two arms, but he's not really worth spending too much in FAAB given the Royals struggles to create save chances.

-The Red Sox plan to activate Nate Eovaldi this weekend and seem to be planning to utilize him as closer upon his activation. This situation seems temporary, at best, until the Red Sox acquire one of the aforementioned possible relievers on the move, Eovaldi must be owned (although he probably already was)

-After singing his praises last week, Hector Neris has been awful (10 earned runs over his last 7 innings). After already dealing with a suspension, Neris was overheard swearing at the Dodgers dugout after his save on Thursday. Sharp Neris owners would be wise to keep tabs on Adam Morgan on the waiver wire. Morgan will likely also fill in for Neris once Neris' suspension is finalized.