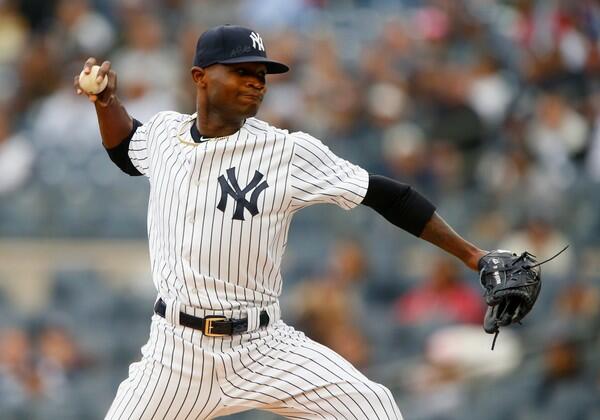 Soler hit his 44th homer of the season on Thursday afternoon off of White Sox ace Lucas Giolito. He has now gone deep three times in the past two days and six times over the past 10 contests. The 27-year-old has flashed potential for short bursts in the past but he has never put together anything like this before. With still a few weeks left in 2019, Soler is already sitting on 44 dingers and 107 RBI; his highs for those categories were 12 and 47 prior to this season. It will be hard to predict what kind of season Soler will have in 2020 after such a massive breakout this season. Soler's improved plate discipline (-1.9% O-Swing% and -2.4% SwStr% in '19 compared to '18) and stellar batted ball statistics (33.0% Hard%/Soft% delta) does suggest that he figured something in 2019. However, a replication of this sort of a season in 2020 seems quite unlikely.

German picked up his 18th win of the season yesterday in Detroit. He came into the contest and tossed 4.0 scoreless innings after CC Sabathia went 3.1 innings as the official starter. This is the first season that German has been a starter for the bulk of the season, and it seems to be wearing on the youngster. In his first 15 starts, German was 12-2 with a 3.38 ERA and 3.91 xFIP; in his last nine starts, he is 5-2 with a 5.73 ERA and 4.70 xFIP. His K% and BB% have stayed basically the same over the course of the season, but he has been increasingly damaged by the longball as we have gotten deeper into the season. For the first 15 starts German gave up 1.53 HR/9, which is nothing special, but over the last nine starts that number has skyrocketed up to 2.77 HR/9...which is the worst amongst qualified starters for that time frame. If it weren't for the Yankees offense helping to inflate his victory tally this season (currently tied with Verlander for the most wins in the majors), German's 2019 campaign would look very pedestrian: 140.3 IP, 4.09 ERA, 9.66 K/9.

Choi went 1 for 1 with four walks and has now reached base safely in 10 consecutive plate appearances (a new team record). Choi hit a pair of homers and took an additional three free passes yesterday to start the streak. For the season he totes a solid 13.5% BB% and has 15 home runs; both of which are career highs. Choi has the makeup of a guy who can hit for power and get on-base via the walk as well, but he does hit a lot more balls on the ground than he does up in the air (43.0 GB% and 34.5 FB%), which will limit his upside in the power department. That being said, there is a lot to like about the guy: he's not a big swing and miss guy (10.2 SwStr%) and he rarely produces weak contact (10.9 Soft%). So, being 28-years-old, Choi certainly has some future upside, but next year might be too soon to consider him for your fantasy roster.

Nick Solak went 2 for 3 and hit his fourth homer of the season on Thursday night against the Rays. The rookie is now sporting a .360 average to go along with an insane .447 wOBA, and 176 wRC+, in 91 career plate appearances. The impressive numbers are not that dissimilar to the numbers he was putting up in triple-A for the Rangers earlier this season. He hit .347 with a .422 wOBA and 10 homers in 128 plate appearances for triple-A Nashville. What has been different is his plate discipline; at Triple-A Nashville he was only walking 4.7% of the time, while with the big club he is currently toting an impressive 13.2% BB%. It's definitely too early to tell how good of a big league hitter Solak is, but his comfortably at the plate has been impressive nonetheless (25.5% O-Swing% and 9.2 SwStr%). If the 24-year-old continues to tear it up for the remainder of 2019 he will be worth a late round fly in the 2020 fantasy draft.

Boyd gave up two runs, on a pair of homers, in 5.0 innings of work against the Yankees. Boyd fell to 8-11 on the season and now owns a subpar 4.54 ERA. This season has been a lost one for the Tigers as a whole and for Boyd himself. The good news is that there is a lot to look at positively for Boyd this season. His 14.1% SwStr% and 11.64 K/9 both rank in the top-10 among qualified starters this season. Also, he doesn't walk many batters (2.4 BB/9) and his 3.81 xFIP suggests that he has been better this season than his hefty ERA suggests. Boyd is still just 28 and he should be a solid fantasy option next year, especially if the Tigers improve as a whole.