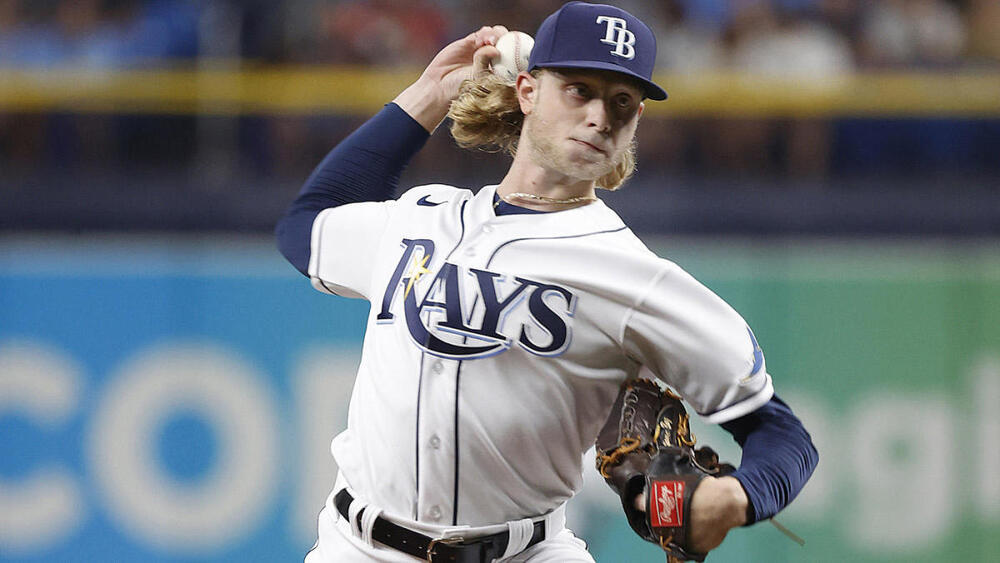 Shane Baz (SP-TB) is slated to start against the Marlins at home on Sunday and you should add and start him if he's available in your league; at time of writing, he's owned in only 15% of ESPN leagues. The 22 year-old righty allowed 2 runs on 2 hits and no walks while fanning 5 over 5 IP against a tough Toronto lineup in his debut earlier this week; both runs came on solo homers. Rated as the #3 pitching prospect and #20 overall prospect in baseball per MLB Pipeline, Baz passed the eye test in his debut, displaying an electric heater (which averaged 97mph) and quality secondary offerings. Across 10 Triple-A starts before his promotion to the majors, Baz logged a 1.76 ERA, 12.5 K/9, and 2.2 BB/9 over 46 innings of work. His 2.99 xFIP did indicate that some good luck, namely a .239 BABIP and 96% strand rate, suppressed his ERA. But his elite strikeout ability paired with improving control make him an intriguing SP for fantasy. This stretch run with Tampa Bay in 2021 is very much an audition for next season and he has impressed so far. Just be advised that he likely will not pitch deeply into games as the franchise manages his workload.

Shane Bieber (SP-CLE) was effective in his return to the mount against the White Sox on Friday, firing 3 scoreless innings in which he walked none and fanned 3 while throwing 22 of his 34 offerings for strikes. It was encouraging to see Bieber be that sharp in his return, especially against a challenging lineup, although it's worth noting that he worked in the 90-92mph range with his heater (he averaged 93mph with it earlier this season). The dip in velocity aside - which might be expected for a guy who missed quite a bit of action because of a shoulder issue - Bieber appeared to be in vintage form as he attacked the zone and was difficult to square up. He was admittedly not as sharp as he was in 2019 and 2020 before he landed on the shelf, compiling a 3.28 ERA, 12.9 K/9, and 3.3 BB/9 across 14 starts (90.2 IP). His walk rate was a bit high (2.1 career), but his 2.87 xFIP and 3.18 SIERA indicate that his ERA was actually a touch on the high side. Overall, Bieber has carried over much of his Cy Young form into the 2021 campaign, as he continues to induce lots of whifs (17% swinging-strike rate) while keeping opponents off-balance with a strong combination of secondary offerings. If he is healthy going into 2022 fantasy drafts - and he should be given his return to action plus the long offseason ahead - there's no reason for Bieber to not be considered a top-5 SP. He lines up for an enticing start in Kansas City next week, but bear in mind that his workload will likely remain limited.

Wander Franco (SS-TB) went 0-1 with a pair of walks and a strikeout in a rehab appearance in Triple-A on Thursday and was activated from the IL prior to Friday's contest with Miami. The 20 year-old rookie has been on the IL since September 11 because of a hamstring strain but recovered well from the injury after a short rehab stint. He batted second against the Marlins, going 1-4 with a 2B and a walk in the contest. Franco has put together an encouraging MLB debut, as he now owns a .284 average to go with 7 homers, 49 runs scored, 36 RBI, and 2 steals across just 276 plate appearances; that's good for a wRC+ of 127. He's certainly held his own at the dish, drawing walks at an 8% clip while fanning just 13% of the time. Franco has not made a ton of hard contact - 38% per Statcast - while rarely swinging and missing (under 8%) and chasing pitches outside of the zone at a slightly below-average 31% rate. So, while he has not exactly lit the world on fire, the switch-hitter has transitioned to the majors pretty well and seems poised to continue his growth in 2022.

Carlos Rodon (SP-CHW) is expected to start against the Reds on Wednesday. The 28 year-old southpaw exited Monday's start against Detroit after just 3 innings because of soreness in his throwing arm. He wasn't especially effective in that outing, either, allowing 2 runs on 2 hits and 2 walks while fanning 6 over those 3 IP. As good as Rodon has been this season overall, it seems that his value is tapped in redraft leagues, as he has not fired more than 5 IP since July 18, although he has been largely effective in his limited action. Given good health in early 2022, he should be a top-10 SP for fantasy in terms of pure talent when drafts roll around, as his 2.47 ERA, 19.8 K/9, and 2.4 BB/9 - backed by a solid 3.04 xFIP and 2.89 SIERA - are elite. Just bear in mind that this season's 127.2 IP to date are his most in a season since 2016 as he has dealt with a variety of significant injuries. The injury history and concerns about his ability to contribute down the stretch - which SHOULD improve next season, right? - makes him something of a high-risk, high-reward SP for fantasy.

Lourdes Gurriel, Jr. (OF-TOR) received stitches on his right middle finger after exiting Thursday's contest with the Twins because a teammate stepped on his finger. X-rays came back negative, so he avoided a major injury and is considered day-to-day. The 27 year-old has put together solid if unspectacular 2021 campaign, batting .285 with 21 homers and 84 RBI across 525 plate appearances, amassing a 115 wRC+ which indicates that he has been an above-average run producer. Gurriel has slashed his strikeout rate to a career-best 19%, thanks to a career-low 11% swinging-strike rate while posting a 43% hard-hit rate per Statcast that comes in at a career low. He continues to swing at a fairly high percentage of pitches outside of the zone (38% o-swing%) and has made contact on a career-high 66% of those swings, which has likely contributed to the lower hard-hit rate. There's no denying that Gurriel can be a solid fantasy contributor in both the average and power departments, but his free-swinging ways may help to cap his production.