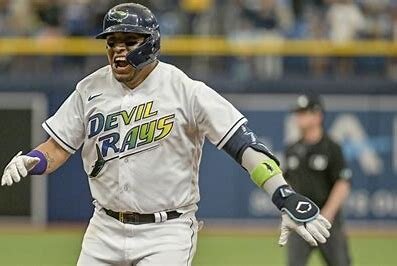 Isaac Paredes (1/2/3 - TB) - Paredes got the day off on Wednesday, something that hopefully won't cool off this tremendous hot streak that he's been on. Paredes is hitting .291 with 10 HR over the past 30 days, and he's doing it with a well above average contact rate. The problem with expecting it to continue is that the exit velocity is actually below average, although it is up from 86 during his first two seasons to 88.2 this year, and at just 23 years of age he does seem to have average raw power. He also have huge flyball and pull rates, so you're going to see a little more power and a little less average than his talent level would normally provide. With Paredes on a 45-50 HR pace for a full season, I think it's crazy to simply dismiss him as a flash in the pan. I think he's more of a 20-25 guy than something more than that, but he's also likely to maintain a better AVG than you'd think....his contact rates have consistently been in the mid-80's, so that's clearly a plus ability. With eligibility at 1B, 2B, and 3B likely, I think he's a very solid player to have on a roster in any format, and with 2 more seasons until he even reaches age 25, there remains the potential for more here as well.

Shane Bieber (SP - CLE) - Bieber's run of good fortune finally came to an end on Wednesday, against the Tigers of all teams. After 9 straight outings allowing 3 runs or fewer, Bieber gave up 5 runs on 7 singles and 3 walks over 5 2/3 innings, striking out 6. There has been a reasonable amount of regression here, especially in terms of quality of contact, but somehow the HR/FB rate has dropped by 6.5% so far in 2022 despite that. Combined with the swinging strike rate dropping from the elite range to merely very good (likely due to a 2 mph velo drop), I'm not nearly as high on Bieber as I've been in the past. The solid control and still very good K ability have him around #20 among SP for me, which is of course still very good, but he's no longer a #1 starter in my book at this diminished velocity.

Michael Stefanic (2B - LAA) - Michael Stefanic has been brought up from AAA to be the everyday 2B for the Angels, and honestly it's a pretty amazing story to go from an undrafted college bat to a starter in the majors in just 4 years. Stefanic isn't very likely to be an impact batter, but his contact skills are fantastic, so the floor seems sort of higher than you'd expect here. He did hit 16 HR at AAA last season, but only has 1 so far this year and I think he's a single-digit HR guy. There isn't much speed either....it's looking like an empty AVG profile for me, but those can have some value in deeper leagues.

Josiah Gray (SP - WAS) - Gray bounced back from a rare rough outing last time out, holding the Phillies to a pair of solo homers from Kyle Schwarber and little else over 6 innings, striking out 11 with 22 swinging strikes in 100 pitches. Gray still has a pretty low floor with the moderate control issues (3.9 BB/9) and massive flyball rate, but he does miss bats aplenty so he has quite a bit of upside as well. He's really been quite good in 5 of his last 6 starts, which gives me hope that he can navigate the difficult schedule for the remainder of July fairly well (SEA, ATL, @LAD). I like Gray as an SP5 in standard formats, and he's certainly someone with top-30 upside over the next few seasons.

Luis Garcia (SS/2B - WAS) - Garcia singled and doubled with 2 RBI on Wednesday, and he's now hit in 9 straight starts. He's currently hitting 325/333/468, but that's definitely inflated by a very favorable BABIP of .378. His contact rate has regressed quite a bit as he's become even more aggressive (swing rate of over 58%!), and he hasn't shown the HR power that he did with 8 HR at AAA early this year, but there's a lot to like here. He's still just 22 and is posting close to average exit velocities, and there is hope for at least a modest amount of SBs as well once he figures out how to read pitchers a bit better (he's 1/4 so far this year). He's a deep league player only at present, but there is hope for more down the road.