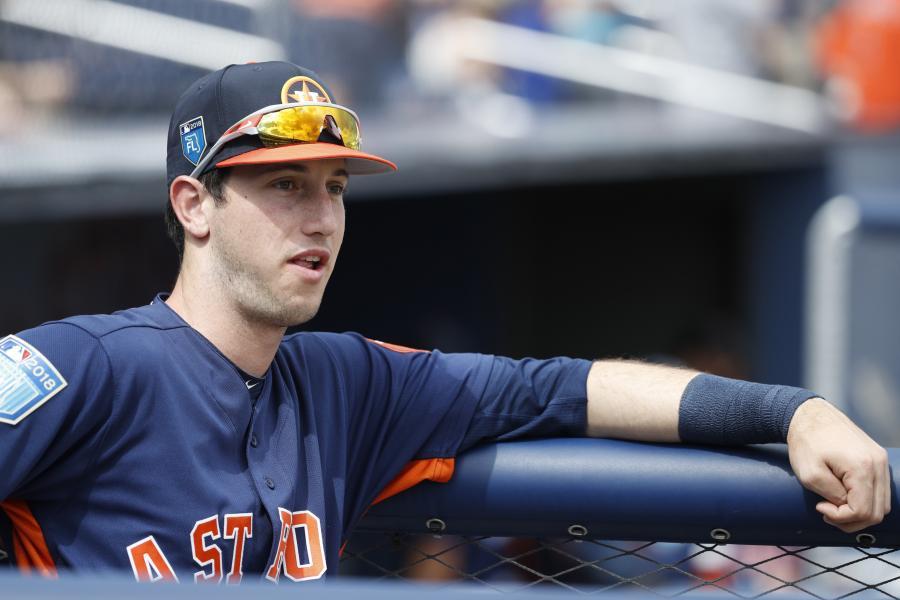 He's up! The Astros purchased Kyle Tucker's contract yesterday. In reading what I wrote about Kyle earlier this year I am not sure if I am surprised or not. I thought it was at least possible there would be no room at the Inn for him until perhaps the roster expansion, but he enticed the big club with 327 ABs in AAA that showed he really had nothing left to learn down there. Jake Marisnick contributed to this as well with his JBJ impersonation (in the field and at the plate). Jake had options and the Astros sent him to AAA. Here's what I said earlier this year ...

In this case, however, Kyle's power ceiling may not be elite, but it's pretty damn good. The 6-4/190 LHH is 30-HR capable and you can add in a nice speed game, which itself is a nice balance of physical speed and baseball acumen, which should allow it to port to the majors somewhat intact. He's going to reach double digits in SBs often in the majors and mid-to-high teens won't be a surprise any given year. So Kyle comfortably projects as a nice power/speed combo which will produce 25/10 with PT. And his indicators are actually pretty impressive as you see below, even as he hit the high minors last year and sees AAA pitching for the first time this year. Given his power ceiling Kyle's contact numbers are quite good and he seems to define his strike zone pretty capably.

I think, however, he could just as easily still be in AA and this point and jump to the majors from there, or perhaps spend the spring there before getting sent to the PCL (just to keep him interested while waiting for a spot to open up in Houston). I think the fact that he opened up in AAA was a test to see how he would fare against some more sophisticated pitching. Kyle's swing is busy. There's a lot of stuff going on and despite 3+ years in the organization, it hasn't really calmed down all that much. Frankly, he walks, and hits well, so why mess with it? Because Astros want him to hit against better pitching as well, so I think the Astros have waited until there's a reason to tinker. So far, AA, and this year AAA hasn't provided a reason, so maybe there isn't one.

Kyle is a high-level prospect with projectable power and decent speed. He's probably ready for at least a taste of the majors, but the Astros' roster and more importantly, Seattle's challenge in the division is going to keep that on hold for now, perhaps until September. Kyle is definitely stash-worthy however, while he's still a bit under the radar from a hype standpoint.

I may be willing to upgrade my speed projection a tick. As I mentioned, Kyle has a nice combination of physical speed and base stealing skills. I personally believe that one of the biggest steps to the majors is the speed game, because speed defense is significantly better in the majors than the minors. Still, AAA is capable of some speed defense and Kyle seems perfectly at ease there. In my mind that upgrades him to a 20/20 projection with a little extra pop. I don't think he's .300 hitter in the majors, he's been pushed by that BABIP, but he's also posted some high BABIPs and his speed will help him retain a better than average rate in that regard.

Kyle is a terrific prospect. The likelihood is that the Astros brought him up to play him and given the way he has handled level jumps so far I don't think it will take long for him to acclimate. It looks as if he can be very productive and he'll get 100-200 more ABs than we had a right to expect this year. Win/Win.

Twenty-three-year-old Peter Alonso was named to the US Futures team this week, he was the Mets' second-round pick out of Florida in 2016. Let's start here with his basic measurables ...
6-3/245

So yes, we are talking raw power, here, lots of it. His EVs are impressive. That has never been a question, but his hit tool has been. Peter, however, grabbed everyone's attention with a very pretty start to his season in AA this spring, his second tour after a 45-ABs taste at the end of last summer. Contact has not been a problem, for Peter, his SwStr% had held below 10% at every stop in his pro career, and he held his K rate below 19% while posting ISOs well into the .200s along the way. He's already converted a lot of his raw power into game power, a process that started in college, early enough to push him into the second round. This year in AA, however, Peter started zoning up and leveraging counts. That helped in his BB rate, his ISO, and even his line drive rates, which peaked in his first real taste of the high minors. This is where we saw a slugger become a hitter too.

That earned him a promotion to AAA which has not gone smoothly so far. He hit a HR on Friday, which was his 4th at the level, but the other three came in one game back on June 23rd. Meanwhile, you see a slip in his SwStr%, LD%, and K rate, but really not more than you'd expect in the first 66 ABs of a level jump, and not enough to explain his sub-.200 BA. His .231 BABIP at AAA is what explains that.

Everything is fine, Peter will acclimate, soon, his stat line will regress positively and he should be in a position to get an opportunity in playing time not too long after the trade deadline. Peter is ripe, so take advantage of this slip at the start of his AAA tour to stash in in leagues with any roster depth and/or a minor league component. He could pay August dividends at a position that has been a little boring this year.