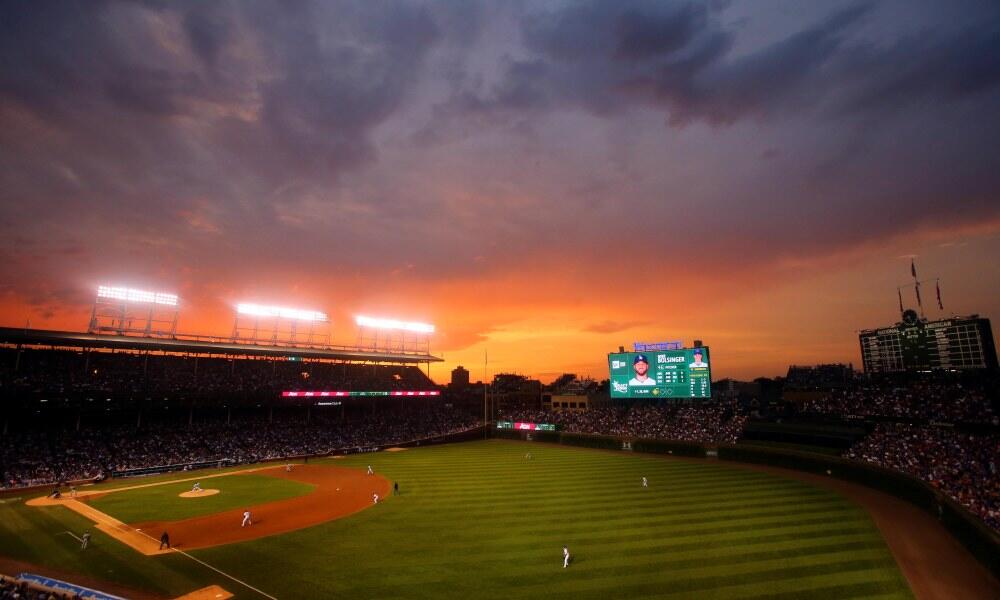 Welcome to the start of our 2020 Fantasy Baseball Season!

As I have written in the past, the art of MLB player projections continues to evolve. With the advances in data collection, there are new indicators introduced every season which aid us in breaking down a player's core skill/ability. Indicators that measure batted ball speed, quality of contact, and location are helping us refine our projections model into unprecedented territory. Indicators such as HR/FB rates are no longer looked at as universal or blanket rates. Each hitter has a unique ability to control and command these rates, and we're finding that the determining factors are more eloquent than just simply batted ball speed. Directional tendencies are now charted and those with a higher pull% tend to compensate for lower batted ball speeds, while those with higher opposite field ability tend to command a higher BABIP.  Our batter projections model separates each projected plate appearance into one of three categories: ground balls, fly balls, and line drives. From there, indicators such as: quality of contact, speed, home park factors, and direction of contact help us ascertain the likely outcome of a player's batted balls. Needless to say, I'm excited about the correlation relationship that we're seeing in our baseball forecasting model.

2019 was once again a very good projection year for us, many of our targets went on and had a better than expected season. As we prepare for the release of the 2020 Fantistics Fantasy Baseball Player Projections/ Draft Advisory Software we wanted to take a look back at some of the calls from our 2019 Preseason. Below is an image of the players we were higher than consensus on coming into the 2019 fantasy baseball draft season. These images come directly from the draft software, are unaltered and include both hits and misses. (Bottom right corner includes players that we recommended on our wish list). 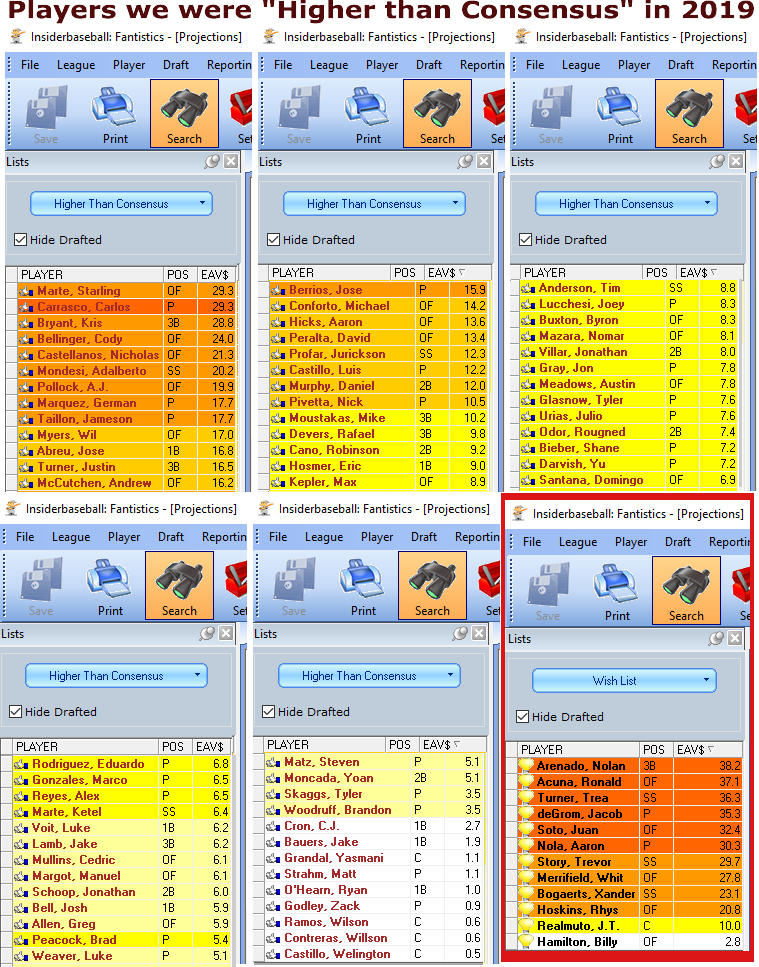 Domingo Santana
After being neutered last season in Milwaukee, Domingo will finally get a shot at playing everyday again in 2019. He struggled last season with irregular playing time, despite posting a 40% Hard Hit rate, that didn't translate in the same HR production from a year before. Sure the 33% HR/FB rate of 2017 was clearly unsustainable, but the 13% rate last season is well below his skill set. At only 26, he'll need to get his contact rate back up into the 70+ range to see everyday playing time, but if he does, he'll be a bargain in most fantasy leagues. 2019 ADP: (22.09) 22nd Round 9th slot | Fantistics Rank: (19.05) 19th Round 5th slot

Luis Castillo
Castillo struggled at times last season, and taking a look at his underlying indicators, it was surprising to see. Sure there's the 96 MPH fastball (explosive), but its the 86 MPH changeup (magical -10 split) that keeps hitters off stride. Couple that with an even slower slider, and you have a 2nd year pitcher who posted a 13.5 SwStr and yet only posted a 8.8 K/9 rate. Look for that rate to go up, and his 70% strand rate to hover around 75% in 2019. What hurt him most last season was the 17.9 HR/FB%. Very high for a pitcher that has a higher than norm GB rate and excellent stuff. When you consider that his Zone contact rate is only 80%, and he only posted a 2.6 BB/9, there's a lot of mid to latter round upside in Castillo this season.  2019 ADP: 11.06 | Fantistics Rank 9.10

Rafael Devers
The former Prospect (A) lived up to his billing before and injury sidelined his terrific season in 2018. In a limited 121 games, Devers delivered with 21 HRs and 66 RBIs. The 17% HR/FB rate is legit based on his 105 BBS on his HRs. What we'll also see improvement on is his BA which languished at only 240 based on an unlucky 222 Singles %. We should see that pop up into the 265-275 range this season. 10% XBH% at only 21 is extremely impressive. If he can contain his Outside the zone swing rate from it's current 37% closer to league mean, we're looking at a impressive production for a long time to come.  2019 ADP: 13.02 | Fantistics Rank 12.01

Nomar Mazara
Mazara's main contribution last season was his 101 RBI's, a count that's not likely to repeat based on his underlying indicators. That said his HR/FB rate of only 14% has upward movement based on his 33% Hard Hit rate and superior 411 distance and 105.3 BBS o n his HRs. That next level will be attainable when Mazara picks it up verses LHP (.317 last season). For a power hitter his Swinging K K rate of only 11% is considered excellent, and at only 23, he's someone we're expecting to be an perennial All Star down the line. 2019 ADP: 14.02 | Fantistics Rank 13.04

Whether you are utilizing our player projections software to produce customized cheat sheets, research player historical trends, as a live draft advisor, or as a Mock Draft tool, the 2020 version is wired for your fantasy championship quest. Once again, back this year will be all of the essential season services including our Minor League Prospect Central, Daily Analysis & Press News, Player Production Charting,  Player Recommendations, Player Tracker, online fantasy databases, 14 day pitching rotations, and our weekly lineup submission aid.

Over the coming days we're going bring you a different perspective served up by some of the best analysts in the business. If you are new to us, please be sure to sign up for our free player projections newsletter. The end game is of course providing you with a competitive season, and we hope that you'll start it with what we believe is our best product to date. Stacking the odds in your favor from draft day, round by round, to season's end. Click here to register for 2020.

Helping you win your Fantasy Baseball League in 2020