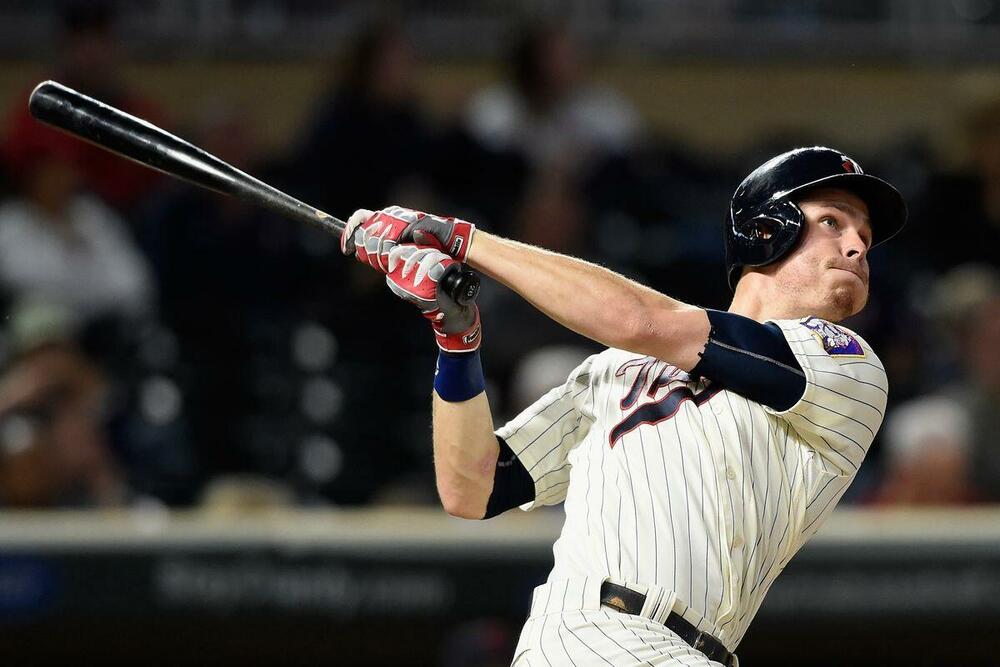 Welcome to the start of our 2019 Fantasy Baseball Season!

2018 was once again a very good projection year for us, many of our targets went on and had a better than expected season. This was highlighted by NL MVP Javier Baez and runner up Christian Yelich, finally becoming the hitters we knew they would become. Below is an image of the players we were higher than consensus on coming into the 2018 fantasy baseball draft season. These images come directly from the draft software, are unaltered and include both hits and misses. 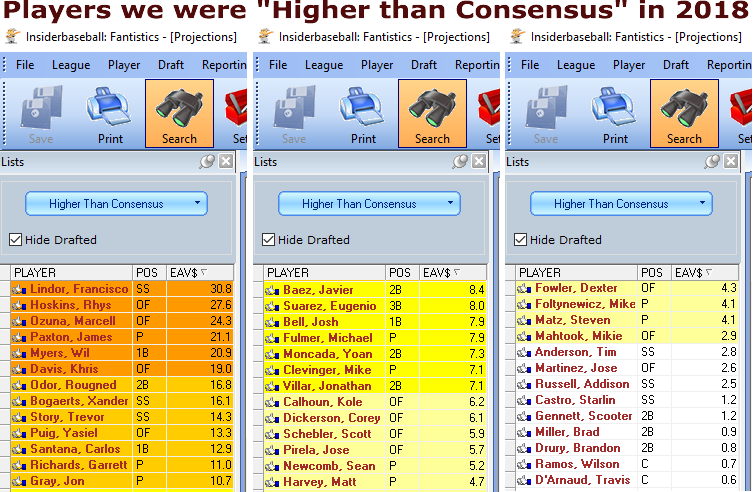 Christian Yelich
Continues to progress in leveling his swing out, as GB/FB rate has dropped from 4.16 in 2015 to 2.20 in 2017. He did however lose some power on his swing last season, seeing his HR distance drop from 407 to 399, and his BBS drop from 104.7 to 103.3. At only 26, this is not an age related decline, and likely something that will reverse itself in 2018. Look for good things from Yelich as his RBI count will explode this season....buy in at the discount.

Rhys Hoskins
Last season in his limited 170 MLB Abs, Rhys was off the chart with 18 HRs and 48 RBIs! Those 18 HRs produced a HR/FB rate of 32%...which is not sustainable. His 46% Hard Hit rate was of course elite, and will be difficult to repeat, but his Batted ball profile on his HRs shows that several of his HRs were just enoughs, so in esseance his misses went as HRs...and that's a testiment to his power. What makes Hoskins unique is his EYE (.80)...which is a rarity for power hitters. He doesn't strikeout often with a 81% contact rate. There is alot to be excited about with this future star.

Trevor Story
Trevor's Hard Hit rate dropped last season from 45% in his rookie campaign to 40% last season, which is still elite. His 16% HR/FB rate on his 407|104.3 is sustainable, in fact that rate could easily climb to 18-20% considering he plays half his games in Coors. Then there is the heavy flyball rates (.70 GB/FB), which hurt his BA (along with the 35% K rate). The 22% ISO from a season ago appears to be depressed, so there is some upside in the RBI count. Let's also consider that he's only 25 YO, so his cieling hasn't been established yet.

CJ Cron
Flyball centric hitter, with 5% walk rate. 75% contact rate hurts his BA, Runs Scored, and RBI categories. Has 20+ HR potential, but below average in other categories. Superior 107.7 BBS and 411 distance on HRs in 2017. Can take it to the next level if he can continue to hit lefties as he did last season in limited ABs.

Nomar Mazara
Mazara's main contribution last season was his 101 RBI's, a count that's not likely to repeat based on his underlying indicators. That said his HR/FB rate of only 14% has upward movement based on his 33% Hard Hit rate and superior 411 distance and 105.3 BBS o n his HRs. That next level will be attainable when Mazara picks it up verses LHP (.317 last season). For a power hitter his Swinging K K rate of only 11% is considered excellent, and at only 23, he's someone we're expecting to be an preinennial All Star down the line.

Alex Bregman
Improved considerably last season, posting a 86% contact rate along with a solid 33% Hard Hit rate. While his HR totals increased to 19 last season, there was a lot left on the table. For starters his 10% HR/FB rate is under represented and then consider what he can do if even half of his very high 17% infield popups go as flyballs in 2018.

Tweets by Fantistics
NL Player Analysis - September 30, 2018
Baseball Is Back, But Hard% Is Weird