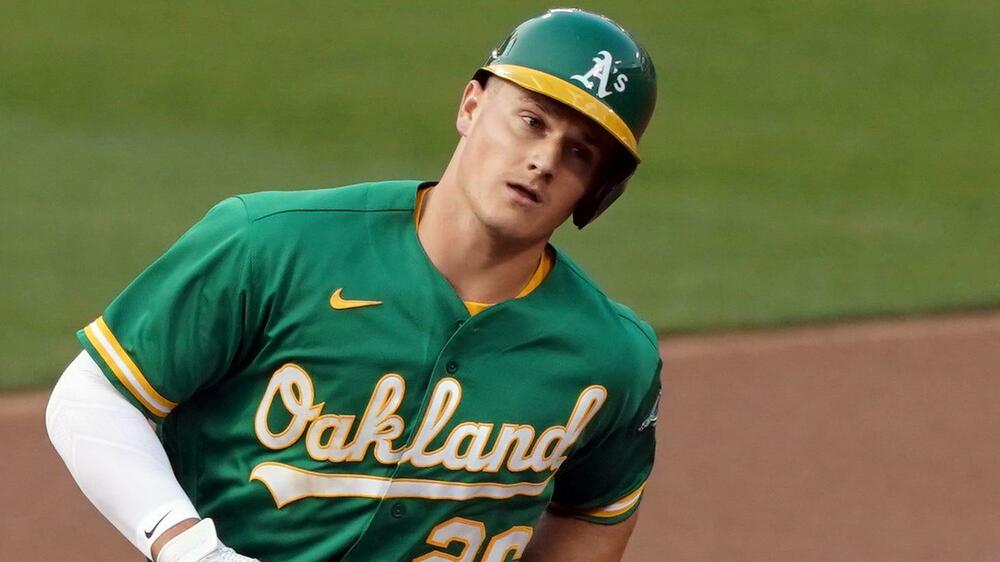 Matt Chapman (3B-OAK) will miss the remainder of the 2020 campaign because of a hip injury that will require surgery. The 27 year-old slugger was sidelined a week ago with right hip tendinitis and was considered day-to-day, but a second opinion on the issue led to the decision to undergo surgery. Chapman was productive but not quite his usual self through 152 PA in 2020, as he was batting just .232 with 10 homers and 25 RBI. His 35% strikeout rate was well above his career average (25%) while his 5% walk rate was about half his career clip. However, he punished the ball when he did make contact, posting an elite 52% hard-hit rate per Statcast to go along with an 18% barrel rate and average exit velocity of 94 mph, all of which are career bests. Perhaps he was trying to hit for more power, as his launch angle was a career-high 24 (17 career), as was his 51% flyball rate, while his 25% groundball rate was a career low. Those came with a career-worst 66% contact rate and a 15% swinging-strike rate that dwarfs his 10% career clip in that area. Chad Pinder and Vimael Machin are expected to cover 3B in Chapman's absence. It is too early to know his status for spring training 2021.

Ryan Mountcastle (3B-BAL) went 2-3 with a double, an RBI, and a walk against the Yankees on Saturday. The 23 year-old rookie is off to a fine start to his MLB career, as he's now hitting .368 with 4 longballs, and 15 RBI through his first 78 PA. He's certainly not been overmatched at the plate, as his 19% strikeout rate attests and, interestingly, he's put together a 10% walk rate to date after never posting a walk rate north of 6% in his minor league career, which stretches back to 2015. Statcast shows a solid 39% hard-hit rate and 9.6% barrel rate, but just an average exit velocity of just 85 mph. 48% of his batted balls have been grounders, so that will be something to keep an eye on as he's not exactly fleet of foot and his 4 homers are the result of a 24% HR/FB that appears unsustainable based on his minor league track record. Ultimately, though, he's swinging a hot bat and that really matters down the stretch in fantasy. If you could use help at 3B, CI, or UTIL, pick him up.

J.D. Martinez (DH-BOS) went 0-4 with a pair of strikeouts against the Rays on Saturday. The 33 year-old slugger is in the midst of a lousy 2020 campaign, as he's now batting just .205 with 4 homers and 18 RBI through 176 PA. His 10% walk rate and 25% strikeout rate are pretty much in line with his career averages, so batted balls are the issue. A .257 BABIP that comes in well below his .343 career average would suggest that some correction to the mean should be coming, but bear in mind that Statcast shows a 40% hard-hit rate that's well below his 48% average since 2015 and his average exit velocity of 89mph is a couple of ticks below his average of 92 in recent years. Martinez is lofting more flyballs (42%) than he has in recent years (34-35% the past two seasons), but because he's making significantly less hard contact his HR/FB is down to just 9% (21% career). It could be that the cancellation of spring training and the delayed start to the season following a brief ramp-up messed with him, or he could just be showing signs of age.

Jordan Montgomery (SP-NYY) put together a strong outing against the Orioles on Saturday, giving up just 1 unearned run on 3 hits and a walk while fanning 9 in 5.2 innings of work. The 27 year-old's numbers through his first 7 starts of the 2020 campaign weren't pretty on the surface, as he owned a 5.72 ERA and 1.41 WHIP in 28.1 IP entering Saturday's outing. But his 4.35 xFIP pointed to some misfortune - particularly a .319 BABIP, 66% strand rate, and 18% HR/FB - inflating his ERA a bit. A look under the hood actually reveals a pitcher who isn't doing all that bad, as Montgomery now boasts an 8.5 K/9 and 1.9 BB/9 while holding opposing batters to a modest 31% hard-hit rate (average exit velocity of just 84 mph). His 11.5% swinging-strike rate is decent, and his average fastball and sinker velocity (93 mph) are actually the highest they've ever been since he made his MLB debut back in 2017. It's also worth noting that Montgomery has added a cutter to his repertoire (9% usage) and is leaning on his changeup more than in the past (26%). He could hold some fantasy value down the stretch in 2020 as his ERA is due for some further correction to the mean. He lines up for a start on the road against the last-place Red Sox next week.

Tyler Glasnow (SP-TB) surrendered 4 runs on 6 hits and a walk while striking out 7 in 7 IP against Boston on Saturday. The 27 year-old flamethrower now owns a 4.47 ERA, 14.2 K/9, and 3.7 BB/9 on the season. His 2.87 xFIP points to a 21% HR/FB inflating his ERA, and the longball remained a problem on Saturday as he allowed two more batted balls to leave the yard. Glasnow's 14% swinging-strike rate and 68% contact rate are both career bests, but opposing batters have often teed off when they have made contact against him, with Statcast showing a 40% hard-hit rate and an average exit velocity of 90 mph. It goes without saying that his propensity for issuing bases on balls does not mix well with his tendency to get hard. He lines up for a start against Baltimore on the road next week.