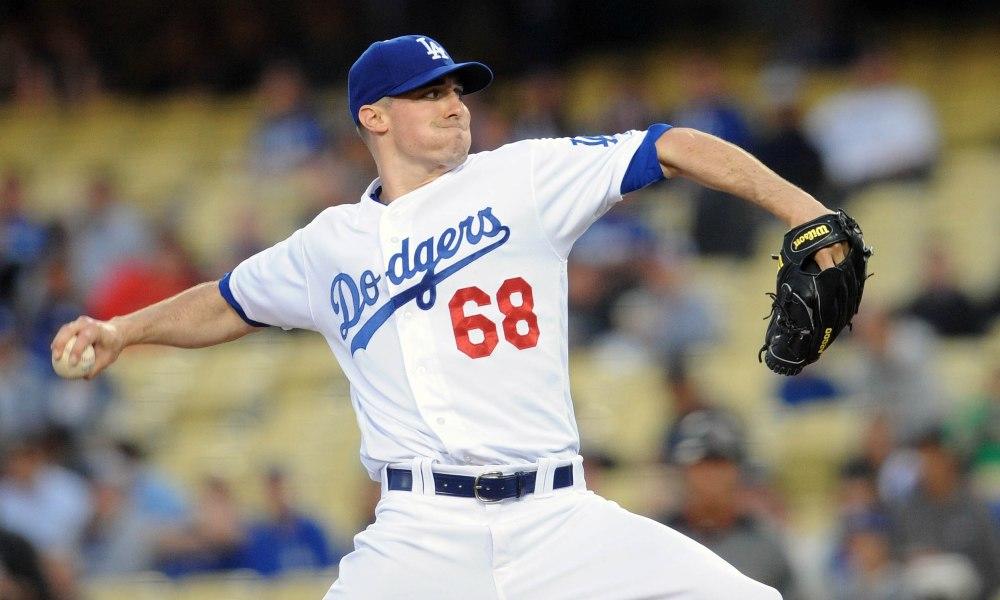 Stripling allowed three runs (two earned) over 4.1 innings against the Red Sox on Friday. Stripling has struggled so far this season with a 5.61 ERA through his first seven starts, and his curveball has been unusually ineffective. To that end, Stripling's curveball's xwOBA has jumped 192 points to .416 this season, and its swinging-strike rate is down from nearly 15% last season to 2.5% this season. Friday's start was no better for Stripling's curve, as the pitch failed to generate a whiff (10 pitches) and allowed two hard-hit balls. The curveball's spin rate, velocity, and movement look in line with its career averages, but its location is off, and Stripling has left an unusually high amount of curveballs over the heart of the plate. Stripling's curveball is a key to his success -- it's had the best xwOBA in his arsenal in each season of his career (excluding this season), and he tends to throw the pitch around 30% of the time -- so fantasy players shouldn't expect his overall performance to rebound without a significant pitch mix adjustment or improvements in his curveball's performance.

Hernandez went 1-for-4 with a double and a strikeout against the Brewers on Friday. Hernandez has been solid for the Indians so far this season with a .746 OPS following Sunday's game, but he still hasn't stolen a base after averaging 6.5 per 60 games over the past five seasons. Hernandez's power is up this season with his 36.7% hard-hit rate up about seven points from his previous career-high and his 89.4 mph average exit velocity up more than three mph from his career-average, but fantasy players shouldn't expect his elevated power to continue through the rest of the season. Hernandez's career is littered with mini power-surges, and his performance this season is consistent with one of those hot streaks. As a result, Hernandez is unlikely to post an OPS above .730 for the rest of the season, and his lack of production the basepaths further depresses his fantasy value. Hernandez is still rostered in nearly 40% of Yahoo leagues but is droppable in most leagues unless you're desperate for stolen bases.

Boyd was a tough-luck loser on Friday, holding the Twins to two runs over six innings with eight strikeouts and no walks. A pair of back-to-back home runs to start the game -- which, amazingly, Boyd has now allowed in three games this season -- were the only blemishes on Boyd's otherwise excellent performance, and Friday's strong performance was another step in the right direction for the 29-year-old. Despite owning an ugly 6.64 ERA for the season, Boyd has now allowed five earned runs over his last three starts (17.1 innings, 2.60 ERA) to go along with 20 strikeouts and just one walk. Boyd's most notable adjustment has been an increase in his changeup usage; after throwing the pitch only 9% of the time in his first five starts this season, Boyd has upped his changeup usage to 22% over his last three games. That adjustment has paid off in a big way, with the pitch posting a whopping 30% swinging-strike rate and near-perfect 0.191 xwOBA so far this season. Fantasy players should expect Boyd to post an ERA below 3.50 with a strikeout rate near 30% over the rest of the season as a result, and attempt to buy-low on the pitcher if any managers are still scared off by his early-season struggles.

Moncada went 1-for-3 with a walk and a strikeout against the Royals on Friday. Moncada is still battling effects from coronavirus including diminished energy and strength, and those effects are apparent in his play so far this season. Compared to last season, Moncada's hard-hit rate is down more than 16 points to a middling 31.7%, his xwOBAcon is down 79 points to .400, and he's yet to steal a base after swiping at least 10 in each of the past two seasons. Given that Mondaca's fatigue is unlikely to go away particularly soon, fantasy players should expect Moncada's performance to continue lagging last season's impressive numbers, making him a less than an exciting option in redraft leagues for the rest of the season. That being said, Moncada is an attractive buy-low candidate in dynasty leagues, in which fantasy players can take advantage of his coronavirus-inflicted down season with a rebound likely to come next year.

Dobnak tossed five shutout innings with four strikeouts and one walk against the Tigers on Friday, giving him a nice bounceback performance after a six-run outing his last start. Even with his rough start last week Dobnak now owns a sparkling 2.72 ERA for the season, and he's come off of a 2019 season that saw him post a 1.59 ERA over 28.1 innings. More than three-quarters of Dobnak's pitches are either sinkers or sliders, and both pitches are worth looking into when evaluating Dobnak's success. Dobnak's sinker (45% usage rate) has been hit hard this season with a 48% hard-hit rate and a .383 xwOBA, but it's generated ground balls at a ridiculous 71% rate -- the league average ground ball rate for sinkers is 53%. That xwOBA may scare some fantasy players off, but he's playing in front of a Minnesota defense that ranks fourth in baseball in defensive runs saved (though it's worth noting that much of that production comes from the team's outfield) and should allow Dobnak to continue outperforming his batted ball expectations. Dobnak's slider (33% usage rate) also generates ground balls at a high 57% rate, but unlike his sinker, his sinker owns a solid 18% swinging-strike rate and drives Dobnak's 8.7% swinging-strike rate. Overall, Dobnak's ability to keep the ball on the ground offsets his lackluster strikeout rate, and although fantasy players should expect the 25-year-old to see some negative regression over the rest of the season, Dobnak is likely to post an ERA below 3.50 with a strikeout rate around 15% for the rest of the year.