Anthony A. Perri
The Inconsistent Player

Several years ago we introduced Consistency Factor and it's implications to both Head to Head leagues as well as all Fantasy leagues regardless of their scoring setup. We run and update this piece every season because of it's veracity.

Consistency Factor gives us an indication of a batter's quality games or quality weekly output. The premise: established players who do not produce quality output on a consistent basis are a risk to achieve similar production in the future.

Essentially we want players who produce consistently rather than in sporadic episodes. The reasoning is a derivative of the laws of probability, consistency is paramount to lowering our risk...the more observations the better.

Below is a list of the worst hitters in terms of weekly consistency in 2010 (based on 375 ABs). The column below, Weekly 2010, is a recording of each player's 2010 quality weeks (out of a max possible 26 weekly observations).  Also included is their 3 year average consistency percentage (2-3 Yr %) which is adjusted for playing time factors. 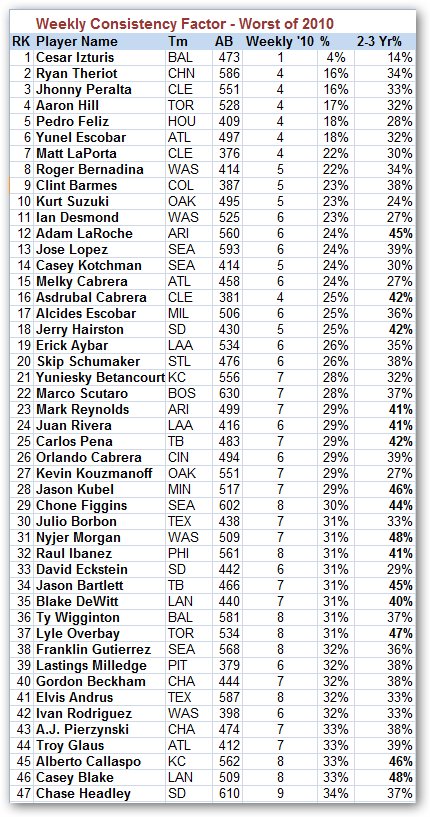 We know what to expect from Ceasar Izturis on a year to year basis: lack luster fantasy output. However there are players such as Casey Blake, Troy Glaus, AJ Pierzynski, Ivan Rodriguez, Lyle Overbay, Ty Wiggington, Raul Ibanez, and Melky Cabrera who have posted decent fantasy production at different points in their careers. Expecting them to return to glory is the risk that we seek to avoid, especially on draft day. As these players are on the backside of the age mountain....and as you get older, favorable consistency declines.

An example of some of the players we do expect to increase production this year, based on their youth and talent level include: Jason Bartlett, Carlos Pena, Elvis Andrus, Gordon Beckham, Nyjer Morgan, Asdrubal Cabrera, Matt Laporta, and Aaron Hill. However their upside is limited based on their seemingly inability to be consistent.

When considering Consistency Factor  both  injury and playing time risks are an additional factor to consider when evaluating players. As you thumb through the Consistency Factor indicator  on the Player Pages within the software, you'll get a better feel on which players are a safer play for you on draft day....this is especially relevant if you play in weekly head to head league.

As every year, I do want to stress that 1st and 2nd year players should be given leeway, as they are just getting their feet wet and do have the potential to become consistent hitters. In the next segment of this series, we'll cover the youth movement (specifically those who have shown to be remarkably consistent early on.) A factor that bodes remarkably well for those looking to find un-touted value come draft day. For those who are interested in consistency factor (register), it's conveniently listed for each player in the Forecaster section of the projections screen (see example below) and you can also sort a player's 2010 Weekly Consistency (WC) and Daily Consistency (DC) by selecting to view those columns in the Player Projections software. 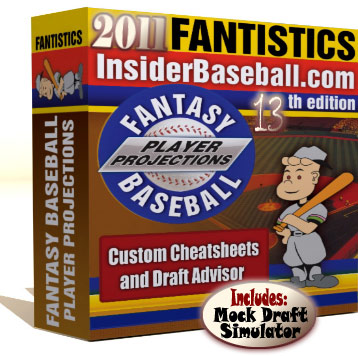 Overview of the 2011 Fantasy Package