As we move beyond the All Star game, let's reacquaint ourselves with some basics. Like many of you, I take this opportunity to assess my needs in order to better my chances for success.

I always say that one needs two things to win a fantasy championship: Skill & the absence of Bad Luck. Since Good Luck and No Skill are less likely win a fantasy championship, I would say that skill is the prevailing determinant in achieving success. As a subscriber you already know that we base our skill on Sabermetric fundamentals (such as such as BHIP%, Runners Stranded %, K%, EYE%, LD% & XBH allowed %.) However when it comes to the second half, these indicators start having less credence and we need to consider other less explainable indicators.

Simply put, everything beyond this point of the season starts relying less on a linear regression model and more on non quantifiable factors. Let's face it, from a mathematical perspective we have a decent sample size to work with (90 games), thus anomalies in theory, should already be working themselves away at this stage. This is the point in the season when it's time to look at the regression to the mean concept and consider the reasons why Pitcher X has a been blighted with a higher than typical Balls Hit Into Play success percentage (BHIP%). Maybe Pitcher X is leaving the ball over the plate this year because of an quad ailment or a mechanical flaw that he might not recover/discover this season. Sure an abnormally low K ratio may offer some insight, but unfortunately it's not that obvious in many of the outlier cases. No matter how much statistical analysis one applies, one has to be willing to accept a lower success percentage on any Sabermetric indicator that is applied from this point forward. Thus we post this second half rankings with consideration to the physiology of seasonal performance.

Every season we come across players who unexplainably perform at higher or lower levels during certain periods of the season. One possible explanation behind the phenomena: second half "positive trends" are due to the players inability to "get it into gear" during the first half, or the ability to "let it all out" during the second half. MLB player performances, unlike the well established principals of the stock market, do not take "random walks" but rather fall into clearly defined patterns. There are many possible explanations why players repeat trend patterns, but sometimes knowing "why" isn't as important as knowing "who". Know the splits and use them to your advantage.

Knowing that over the last 3 years Adrian Beltre and Carlos Gonzalez's second half slugging percentage RISES by over 100 points (+.15 FPI), is pretty handy information.  Here's a big look at the group of players who have performed much better in the second half of the season over the last three years (some players only have a 2 year history): 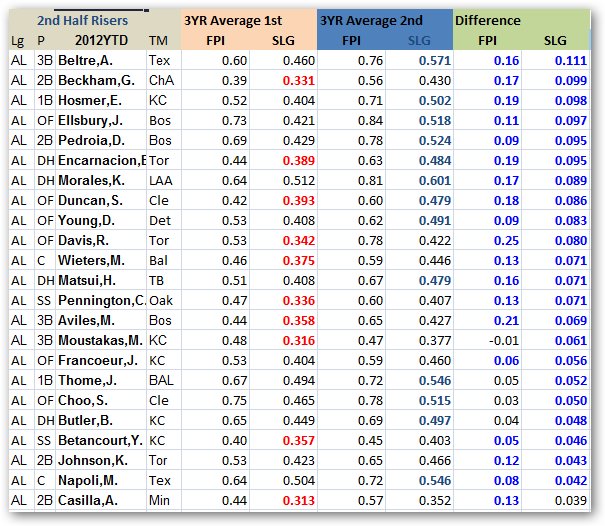 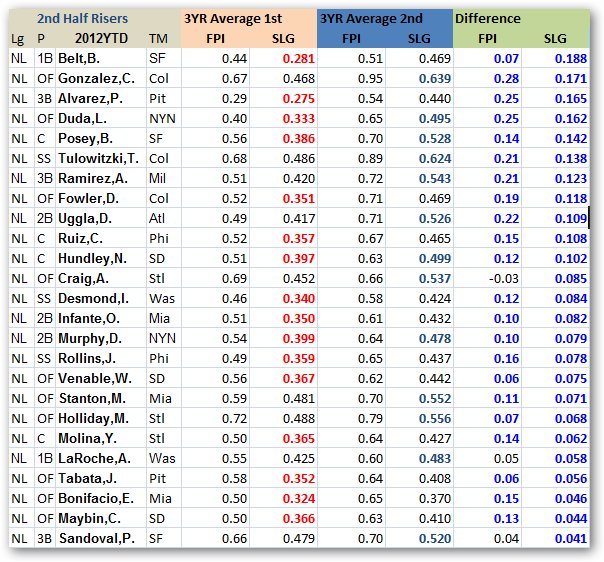 On the other end of the spectrum are the players who have not had a good second half based on their 3 year average.  Justin Morneau, Colby Rasmus, David Wright, and Adrian Gonzalez have seen their slugging percentage drop by over 70 points when compared to their first half! It's typical to find this list littered with catchers, as they tend to tire in the late stages of the season (squatting for 3 hours, 5 days a week has it's toll) On to the list: 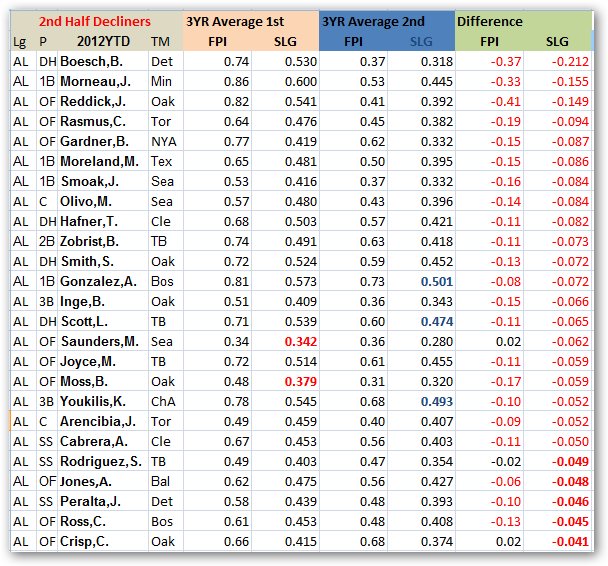 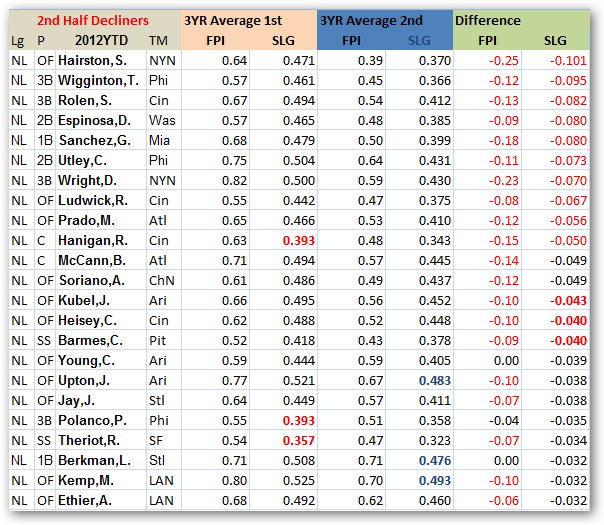 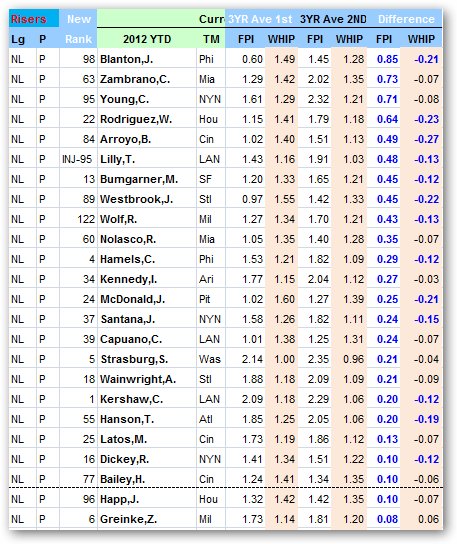 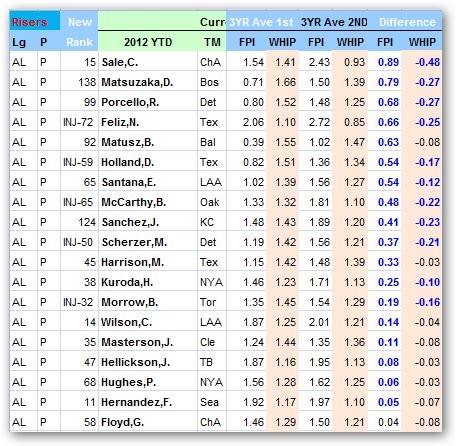 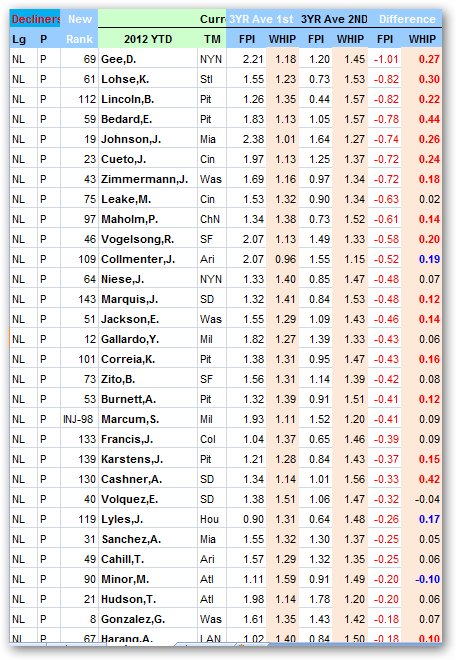 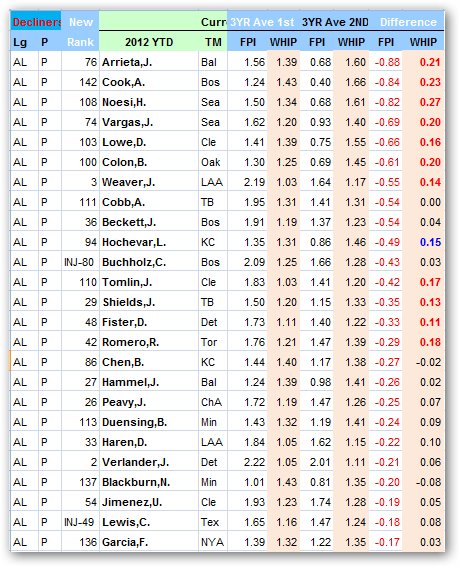 Good Luck in the Second Half of the Season! - Anthony A. Perri