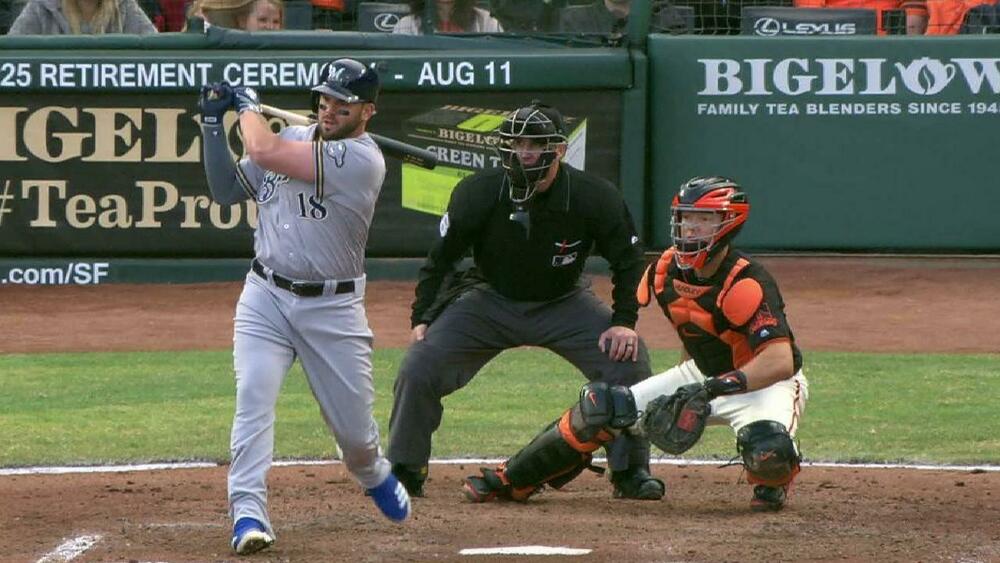 The biggest story of the 2018 baseball season, at least in advanced analytic circles, was what in the world was going on with hard hit percentage? After years of climbing home run totals with relatively flat hard hit percentage movement, total leaguewide home runs fell by 520, the largest numerical movement and the second largest percentage drop since Baseball Info Solutions began tracking hard hit rate in 2002. Strangely, hard hit percentage actually rose by 3.5%, the highest increase since 2012.

There's a lot of really good content floating around the internet with theories about why home runs are on the decline, but hard hit percentage is on the rise. This piece isn't going to be one of those articles - there are plenty of analysts with far more cerebral reach than myself that can tackle the issue with the intelligence it deserves. Instead, I merely want to shed light on some other ancillary trends that might be worth considering on draft day and asking the question "why?".

Before we start, I want to make it clear that despite the shockwaves that reverberated through the sabermetric crowd last season, this isn't the first time we saw hard hit go up and home run totals go down in the same season. In fact, since the quality of contact metrics begin being tracked, this is the fifth time this "phenomenon" has occurred. See the years in red below: 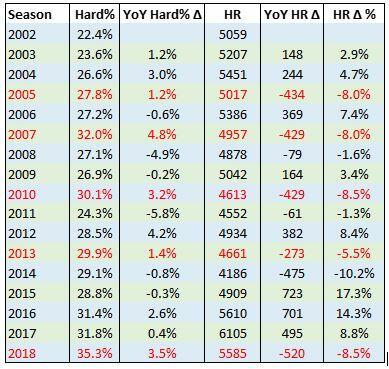 So what's so different about 2018 and why is it a big deal? Well for starters, it represents the largest numerical drop in home runs year-over-year since the 1994 strike. This, of course, immediately commands attention, particularly when it happens the same year that fantasy analysts were pushing the strategy that "power is plentiful" because of the movement towards the three true outcomes and more focus on swing mechanics utilizing launch angle. The latter brings us to our next point, which is simply that it doesn't fit in the schema we (fans, media, coaches, etc) created to explain how the game is played now. While it's easy to say the game is changing and there's a heavier reliance on the home run than any other time in baseball history, it's another to back it up with facts. Moreover, there's no shortage of Statcast metrics popping up that are also driving us towards the pre-determined conclusion that the longball is up. That's why 2018 is strange and that's why there's so much attention on hard hit rate and home runs. Every time a number doesn't behave, a baseball nerd's mind explodes (don't worry, nerds can insult other nerds).

So does this mean the Three True Outcome theory is nil and void?

The short answer is "no". In fact, despite the drop in homeruns and a flat walk rate, the Three True Outcome percentage (TTO%) managed to increase for the 5th straight year to 33.8%. This is largely driven by the 13th straight season of increasing strikeout percentage, but does support the theory that players are becoming less selective and willing to swing more frequently with the hope that the ball contact will result in a home run (because, you know, that 3.5% more hard hit rate).

How about the Statcast and launch angle impact - shouldn't that lead to more home runs?

This is where things get a little fun because the shift in mentality and subsequently swing mechanics can be easily identified. While the aggregate flyball rate was relatively flat versus 2017, we saw the aggregate groundball rate fall 1% to 43.2%, the largest drop we have ever seen since the stat has been tracked. Additionally, we saw the aggregate line drive rate jump up 1.2% to 21.5%, the highest average since 2003 and the largest single season year-over-year increase since 2012. Being the good statisticians that we are, we know that line drives have the highest batting average and wOBA, while groundballs have the lowest ISO and an anemic .237 batting average (but still second behind flyballs at .207). Knowing we're reducing the bad (groundballs) and increasing the good (line drives), wouldn't we expect to see some of those gains carry through to the bottom line as improvements to BABIP and ISO? Once again, the stats say no with league wide ISO falling to .161 from .171 and BABIP falling to .296 from .300.

So HRs are down, BABIP is down, and ISO is down, yet we're hitting the ball harder than we ever have before. What gives?

As I stated earlier, there are a myriad of the best minds in baseball analytics already working to answer these questions, so I'm not comfortable unveiling any firm "answers" in this space. Like anything in baseball, there's no silver bullet stat and usually there's rarely a black and white answer. If you tune into the Fantistics show on Sirius XM (Sirius 210/XM 87) on weekend mornings from 10AM-1PM ET, Lou Blasi, Schuyler Dombroske and myself will attempt to hold these questions up at different angles and to different light to see if "better" answers become evident. As we explore this topic all pre-season, we'll bring on guests who are already much further along in this analysis and post more related articles and research on this baseball blog as our understanding of this evolves.

Sure, I have possible theories related to the ball and others related to normal variance. As the weeks leading up to the season go by and we talk with more experts, my theories will probably further evolve. The point to take away from all of this is that we should never claim to fully understand any aspect of our game or claim to be able to predict what will happen with absolute certainty. The best outcome anyone can achieve is by putting probability on your side, trusting your analysis of the numbers and keeping your ear to the ground.

Tweets by Fantistics
Welcome to the 2019 Fantasy Baseball Season!
ADP and its Ramifications: February 4, 2019