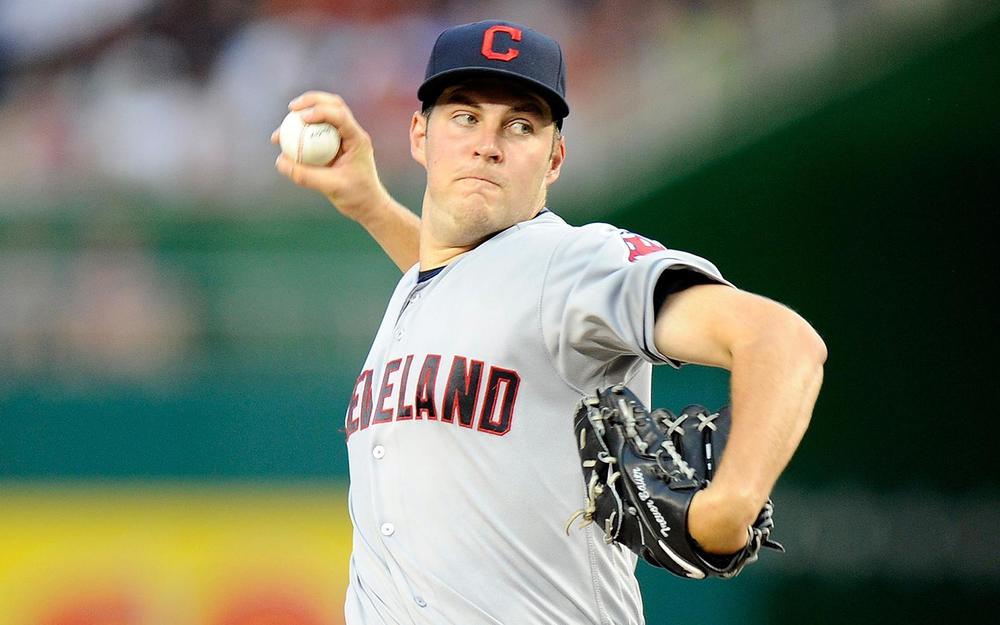 Bauer, Trevor Bauer had a massive season last year with a dominant WHIP (1.09) / ERA (2.21), but the Indians shorted him about 3 wins. Bauer kicked up his SwStr rate from 9.2 to 13.3%...a huge jump. Part of this can be attributed to the increase in fastball by almost 2 MPH the last couple of years (92.8 to 94.5) and a uptick in the effectiveness and usage of his slider, which he now throws a little slower than he used to (drop 12 to FB). His ERA is likely to rise however as his 6.2 HR/FB rate is going to regress closer to his career norms of 10-11%. Aside from the volatile personality, there is something special here.

Carrasco, Carlos Has a dominant 15.3 SwStr rate, which makes his 74% Strand Rate surprising as it should have been closer to 80%, which will likely revert and improve his ERA in 2019. For some reason he continually struggles at home (430 SLG), and dominates on the road (.348 SLG). More of the same expected in 2019, except maybe the Win totals...they appear inflated based on his Quality starts.

Kluber, Corey Has become one of the most dominant pitchers in baseball after he reached the age of 30. There are some cracks in the armor however as he enters his 33rd year of age. His fastball lost about 1 MPH in the 2nd half, and his SwStr rate dropped from 15.6 in 2017 to 12% (which is still excellent) last season. He might very well end up as a top 5 fantasy pitcher in 2019, but the risk has increased slightly.

Sale, Chris Remains an elite pitcher with 15.8 SwStr rate and 13.5 K/9. His 79% Strand Rate is legit. Fastball hasn't lost any speed (94.7) and changeup was even more effective last season despite increasing by 1 MPH . Real gains came off Slider which ticked up to a ++ pitch for him in 2018. Expect Wins to range between 16-20 if everything goes right for him in 2019.

Anderson, Tyler Anderson achieved the magical 10+ split in MPH between his fastball and changeup last season and his production kicked up a notch. His 12% SwStr rate is excellent, and that leads us to believe that he should be posting K/9 rates better than 8.4 and a Strand Rate better than 70%. Our enthusiasm is however throttled by the fact that he plays his home games in Coors field, which fuel his higher than average 15% HR/FB rate against.

Chacin, Jhoulys We were wrong on Chacin last season, we didn't think his 272 BABIP against would hold up, and instead it got better in 2018 (250). We're not buying it as part of his skill set however, as his 37% hard hit rate is higher than average, thus we expect a reversal of fortunes from him in 2019. Oh yeah those 15 Wins from a pitcher who only averaged 5.5 Innings per start and 86 pitches a game...no way that's repeatable and that 9.3 HR/FB rate is going to increase considerably as well.

Price, David Posted a monster final 11 starts with a .97 WHIP/2.25 ERA, but there are some warning signs. His fastball is off by 1.5 MPH (92.7), but the drop hasn't translated in a reduction of his changeup speed. His SwStr% has dropped from 11.7 to only 9.6% last season...this despite maintaining a solid 9.1 K/9 rate. Lives on the outside verses RHH, and if he can maintain that, he'll continue to force weaker than typical contact (32% hard hit rate - 274 BABIP). I'm personally not willing to pay for the risk.

Sanchez, Anibal Sanchez did a great job last season inducing weak contact, His Hard Hit rates dropped from 37% to only 28%, which coincided with his abnormally low .255 BABIP. Looking into the details, it appears that he has masterfully reduced the speed of his changeup over the years from (84.6 to 80.9 last season), creating a 10 mph split between his fastball and changeup. A pitch he now uses 25% of the time and has become a +++ pitch for him. Then the movement on his cutter has improved as well, which has now become a ++ pitch. At 35, can he maintain these newly recreated pitches? Or will hitters no longer look for the fastball (38%) and tee off on him this season. Either way don't pay for his 2018 2.83 ERA/ 1.08 WHIP as it's likely not sustainable.

Scherzer, Max Has posted a sub 1 WHIP, 5 of the last 6 seasons. Fastball has not lost any velocity, and has maintained a superior Strand Rate 4 straight seasons. That said his 78% strand rate is repeatable, despite an insane 16.2 SwStr rate. The K rate has increased to an uber elite 12.2 K/9. His production last season was very similar to his production in 2017, which is an indication that he's still going strong, but at 34, how much longer will it last and who will be holding the bag at the end of his incredible career? His .265 BABIP against is an absolute part of his skill set and corresponds to the sub par hard hit rate against (29%). Still a top 2 pitcher in baseball, but is some regression natural?

Verlander, Justin Verlander maintained the 2MPH pick up in his fastball that was added in 2017, last season. At 35 with a 95.1 MPH average fastball, we're in Nolan Ryan territory. The consistently low BABIP (272) is a skill set and predicated on weaker than typical contact (29%). His 14.5% SwStr rate is the highest in his career, as was his 12.2 K/9 rate. Can't explain it, other than he's still trying to impress Kate Upton.

Keuchel, Dallas Was shorted 2 Wins last season based on our Expected Wins calculation. H was unlucky with his BABIP, which should have been less than 300 based on the weaker than average hard contact against (28%). His GB % continues to be his calling card (54%), but last year we saw a reduction in his SwStr rate from 10.9 to 8.3. This despite his FB picking up 1 MPH, but it's his changeup that picked up 1.2 MPH, that has reduced his holy grail split from -10.5 MPH split to a still productive 9.6. At only 31, he's a good bet to rebound and post better numbers in 2019.

McHugh, Collin Mchugh is expected to stay in the Astros rotation after taking a year and 1/2 off in the Astros bullpen, During his stay there his SwStr rate jumped from 10.7 to an elite 13.3%....but that might be short lived as throwing 100 pitches a game verses 15-20, takes it's toll on fastball speeds (which jumped 2 MPH). Additionally his 83% strand rate will not be sustained as a starter. Oh yeah there's that 248 BABIP, that won't last either. This is not to say that McHugh isn't a valued fantasy commodity...because he will be, just don't expect the rates from his bullpen stay.

Peacock, Brad Peacock is expected to join the Astros rotation this season. He was absolutely dominate in the bullpen with a 13.5 SwStr rate and 13.3 K/9. Even a 25% reduction in these rates will produce superior returns for fantasy owners. Certainly worth a flyer, there's plenty of late round upside here.

Shoemaker, Matt Forearm injuries have sidetracked him the last 2 years, hopes to get a fresh start this season with the Blue Jays. Was posting a 13% SwStr rate and 9.6 K/9 rate before injuries ended his season. Split finger fastball has become a very effective pitch for him.

Skaggs, Tyler Has solid stuff as evidenced by his 11% SwStr rate and 83% zone contact rates. If he can maintain his 3.2:1 K:BB rate in 2019, and stay healthy he could post a solid season. His 328 BABIP from a season ago should regress, which should lead to a lower ERA and WHIP in 2019.

Greinke, Zack Posted a very similar season to his 2017 season, as his fastball speed continues to erode (lost 1.4 MPH last season - 89.6). To his credit he has also dropped his changeup speed by about 1 MPH, and although it's not a big split, it's enough to be registered as a ++ pitch. His 272 BABIP is not sustainable, especially considering he was hit pretty hard last season (41%) and only has a 10.8 SwStr rate. Then there is the 77% strand rate that is not sustainable with a 8.6 K/9. He's a bulldog though and has labored through with decent returns, despite not having the best stuff anymore.

Ryu, Hyun-Jin Has had troubles staying healthy, but dominated last season in his limited appearances with a 11.6 SwStr rate and 9.7 K/9. Then there are the rarity of walks 1.6 BB/9. That said his 88% Strand Rate from a season ago is not likely to repeat, so there will be a considerable pullback from his outstanding rate stats from 2018.

Fiers, Mike Fiers had a solid season in 2018 with a 3.56 ERA and 1.18 WHIP, unfortunately most that was predicated on a fortuitous 269 BABIP, which came off a relatively high 39% hard hit rate against. His xFIP last season was 4.51. Regression projected.

Gibson, Kyle Overall numbers were on the fortuitous end, as his 39% Hard hit rate should have resulted in a higher BABIP (285). He does induce a higher than normal 11.5% SwStr rate, so on the plus side there is more upside to his K numbers. He did improve his fastball last season by 2 MPH, but his changeup increased by 3 MPH. Has boom or bust written all over him.

deGrom, Jacob Cy Young season and well deserved. 11.2 K/9 with an outlandish 15.1 SwStr. Should have won 19 games in a normal setting, but the Mets gave him only an average of 3.6 Runs per 9. His 281 BABIP against was well within reason given the meager 27% contact that opponents hit against him. His 84% Strand Rate is going to be difficult to maintain however, this despite an uptick in his 96 MPH fastball. All said he should still be a solid top 3 fantasy pitcher in 2019.

Harvey, Matt Still has a 94 MPH average fastball, which although 2 MPH faster than his peak should still be enough to work with. The problem is his changeup has only slowed by 1 MPH, which has transformed from a + to a --- pitch for him. He has the potential to be effective, assuming he decides to dedicate himself to being a pitcher and not a thrower.

Syndergaard, Noah Limited opposing hitters to one of the lowest hard hit rates in baseball last season with a 22% rate, yet was extremely unlucky on balls in play with a 320 BABIP against, that will revert in his favor in 2019. Still rocketing an average fastball of 97.4 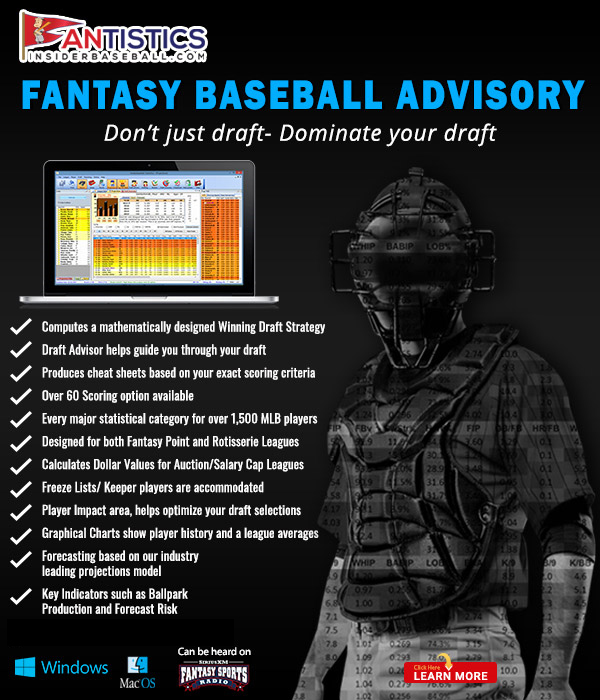 Tweets by Fantistics
Preseason Prep-March 15, 2019
An Introduction to Hard Hit Rate (Hard%) for Offense and Pitching