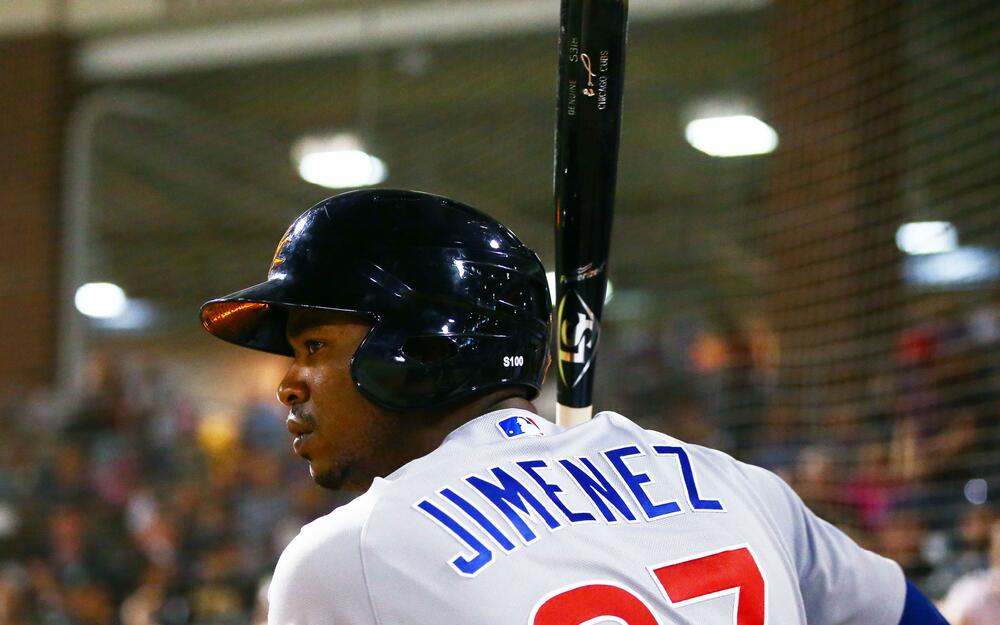 Mercado to start the season in Minors

Despite a brutal 2020 campaign, Oscar Mercado entered Spring Training as the favorite to win the starting CF job for the Indians, thanks to a successful rookie season in 2019. However, Mercado has struggled again this spring, slashing .214/.241/.286 across 28 AB's and the Indians feel it's best to let Mercado try to work things out in the minors. There's a very good chance we will see Mercado return to the big league club at some point this season, but he can be ignored in fantasy drafts.

With Mercado being sent to the minors and Amed Rosario still learning how to play the outfield, Ben Gamel has emerged as a candidate for the Indians' starting CF job, with Braadley Zimmer being the primary competition. Gamel had a decent season in Seattle back in 2017 when he hit .275 with 11 HR's and 68 runs scored, but he has hit just 11 HR's combined in the three seasons since. In his most recent two seasons with the Brewers, his K% has bloated to around 30%, and consequently, his BA has dropped below .250. Gamel does have a few things going for him; he has posted a BB% above 10% each of the past 3 seasons, and he maintains a high BABIP (career .341) thanks to his high LD% (24.9%). But he doesn't hit the ball particularly hard (30.5% Hard%) and he doesn't hit many fly balls (under 30% the last 3 seasons), which makes his fantasy profile rather weak.

McKenzie struggling, could rotation spot be in jeopardy?

It has been assumed since the beginning of Spring Training that Triston McKenzie would slot in as the #4 starter in the Tribe rotation, although the team has never officially made that announcement. McKenzie has struggled this spring, allowing 12 ER's in 14.1 IP (7.53 ERA), including 7 HR's allowed. And perhaps most concerning is his 10 BB's during that time frame. Nothing has been decided yet, but there seems to be at least a possibility that McKenzie will be given time to work on some things before entering the team's rotation. McKenzie has tons of upside - he posted a 3.24 ERA and 42:9 K:BB in 33.1 last season - and he almost certainly will be a factor for the Indians this season, so he makes a lot of sense if he's available toward the end of drafts. But you may want to think twice before investing too much in McKenzie, being that he hasn't even been guaranteed a rotations spot to start the season.

So, is Karinchak the closer?

James Karinchak struck out a ridiculous 48.6% of the batters he faced last year, so it was natural to assume that he would take over as the Indians closer after Brad Hand departed in free agency, although the team has yet to make that announcement. Fantasy owners seem to be assuming that he will mostly be used as a traditional closer, as he is currently being drafted as the 6th RP off the board. If he is indeed the closer, his elite K% automatically makes him one of the better options in the league, although his high BB% (5.33 BB/9 last season) would likely keep him out of the top tier. However, the Indians have not committed to using Karinchak as a traditional closer, and may very well use him at various points in a game depending on when they feel they need him most. If that were to be the case, he would still have fantasy value thanks to his strikeouts and likely good ratios, but he wouldn't be worth nearly what he costs right now. If Karinchak is not the undisputed closer, Emmanuel Clase or Nick Wittgren could get some save opportunities.

Eloy Jimenez hurt his shoulder after slamming into a wall during Wednesday's game against the A's and was removed from the contest. The team will have more information about the injury after evaluating Jimenez on Thursday. Jimenez is being drafted as a top-10 OF and for good reason - he has 45 HR's in 177 career games and owns a career 50.4% HardHit% (55.7% last season). He could even theoretically have more upside if he would put the ball in the air more. Over his first two seasons, he has a 49.2% GB%. If he could turn some of those grounders into fly balls, he has a chance to make a run at a 50 dinger season. For now, Jimenez owners just have to hold their breath and hope the shoulder injury isn't serious, while those who are drafting over the next couple days should check his status once it has been updated.

White Sox closer Liam Hendriks has been dealing with a kidney stone issue this spring, which has limited him to just 3 IP so far this preseason. The team is optimistic though that he will be ready to go by Opening Day. Hendriks has arguably been the best reliever in the game over the past two seasons, recording a 1.79 ERA, 13.13 K/9, and 1.96 BB/9 across 110.1 IP since the start of the 2019 season. The move to Chicago will likely hurt a bit, as Hendriks has allowed a lot of FB's in recent years, and his 5.5% HR/FB% over the past two years is probably not sustainable. But he still deserves to go as one of the top closers off the board, although I generally try to avoid grabbing any closers that early due to the volatility of the position.

Kirby Yates is suffering from an elbow injury which will very likely lead to Tommy John Surgery and keep him out for the entire 2021 season. This is a tough blow for the Blue Jays who presumably were planning on using Yates as their closer, and a tougher blow for Yates who already missed nearly the entire 2020 season due to injury. While Yates' fate hasn't yet been sealed, fantasy owners should be looking for other options at this point.

Is Romano top option for Jays at closer?

With Yates looking like he'll be out for the year, Jordan Romano may be the favorite for saves out of the Jays pen. Romano was excellent in 2020, posting a 1.23 ERA, 2.40 xFIP, and 12.89 K/9 across 14.2 IP. There was some luck involved there, with a 98.0% LOB% and .207 BABIP, despite allowing a HardHit% of 48.4%. But there were also some very good things, including a 58.1% GB% and an exceptional 19.4% SwStr%. Romano is a low end option right now, due to the lack of certainty about the situation and his short track record, but he's the reliever I'm taking from the Blue Jays right now.

Tatis suffered a shoulder injury on Tuesday, but the Padres are hoping that he will be able to resume playing within the next couple of days. This is great news for those who drafted Tatis as a top-5 overall pick in fantasy drafts. If healthy, Tatis is one of few players with a legitimate shot at 35 HR's and 25 SB's, and he even cut his K% last season to a much more respectable 23.7% K%. Despite reducing his K% by nearly 6%, his BA dropped 40 points to .277 due to a 100 point drop in BABIP. If he can maintain the contact gains he made last season, then the .277 BA would be a baseline of what Tatis is capable of. Even if he gives back a bit in terms of strikeouts, his HardHit% should prevent him from being a BA liability. Regardless, Tatis should be an elite contributor in all counting stats if healthy, and is worth the early pick.

Biggio was held out of Wednesday's lineup due to a finger injury, but the Blue Jays do not believe that the injury is serious. Biggio continued to show excellent patience at the plate in 2020 with a 15.5% BB% and an MLB-best 16.3% O-Swing%. He cut his K% from 28.6% to 23.0% while improving his already good SwStr% to 7.8%. Biggio will probably give you something around 20 HR's and 15 SB's, and while he probably won't help you in BA, his strong OBP does help him in the runs category as he has scored 107 runs in 159 games across his first two big-league seasons.

Davis will be out 3-4 weeks due to a left quad strain that he suffered on Tuesday. It has been quite a drastic fall for Davis over the past couple of years, as he has gone from one of the premiere power hitters of the league to a barely usable player in a relatively short period of time. He hit 40+ HR's each season from 2016-2018 but hit just 23 in 2019, before hitting just 2 in 2020 and being limited to just 99 PA's. All of Davis' metrics have gone way down; in his heyday, his Hard% hovered close to 50%, his EV was around 92, and his Barrel% was about 17%. Over the past two years, his Hard% has fallen to 39.5% and 30%, his EV has dropped to 90 and then to 88, while his Barrel% has plummeted to around 8%. At 33 years old, it's unclear how much Davis has left in the tank.

Bader will start the season on the IL due to a sore forearm, and will likely be out for 4-6 weeks. While Bader did reach double-digit HR's and SB's in both 2018 and 2019, he has struggled overall offensively with a career .230 BA and 29.1% K% and has never topped 12 HR's or 40 RBI in a single season. He has actually been quite good against LHP's in his career, with a .264 BA, .853 OPS and 13 HR's across 292 PA's. But against RHP's, he has hit just .223 with a .669 OPS, and unfortunately for Bader, most pitchers are righties. Even when healthy, he is best used in daily formats against a southpaw, but for now he can be ignored until at least May.

With Harrison Bader set to open the season on the IL, Carlson will fill in as the Cardinals starting CF. Carlson struggled in his first taste of the big leagues last season, slashing .200/.252/.364 with a 29.4% K%. But he did hit 26 HR's and grab 20 SB's in 126 MiLB games in 2019, so he is someone to keep an eye on. His SwStr% is also a reasonable 11.4% so we may very well see his K% come down at least a bit. Bader is expected back sometime in May, but if Carlson plays well, one would think he would have the opportunity to remain a part of the lineup.

Manaea allowed 1 ER and struck out 3 in 5.1 IP on Wednesday and has a 12:5 K:BB and 3.00 ERA over 12 spring innings. People got a bit overexcited after Manaea had a brief but excellent run in 2019 in which he recorded a 1.21 ERA and struck out over a batter an inning for the first time in his career. But he fell back in 2020 as his K/9 dropped to 7.50, right around his career average, and his ERA rose to 4.50. On the bright side, he had a career high 50.3% GB%, which led to a career best 3.77 xFIP. Manaea shoud be a decent back of the rotation fantasy pitcher, as he limits walks which helps his WHIP, and his ERA probably won't hurt you. But he doesn't have a ton of upside due to the shortage of strikeouts.

Odorizzi was shelled for 7 ER's, including 4 HR's, in 1 IP of work against the Nationals on Wednesday. You don't want to read too much into spring numbers but yikes. Odorizzi was anyways not going to be ready to join the rotation to start the season due to his late signing with the Astros, and this start just reinforces that he is not quite ready to go yet. Odorizzi has been a heavy FB pitcher throughout his career, and that doesn't like it will be changing soon. He's hard to trust at all right now.