Anthony A. Perri
Sabermetric analysis is and has been the foundation of our Fantasy Baseball player projections since 1999

Sabermetric analysis is and has been the foundation of our Fantasy Baseball player projections since 1999. This analysis along with our founding concept of position scarcity, has helped us achieve superior consistency in projections accuracy. Accuracy that has aided tens of thousands in their successful quest for a Fantasy Championship. All of which can be customized to your league settings in our 2015 Player Projections Software. Let's start by looking at some of the Sabermetric indicators that are defining our 2015 Catcher projections:

Atl Bethancourt, Christian Bethancourt is considered an overall top 25 prospect, and that's always appealing when it comes from the catchers position. In the minors, he consistently had an ISO in the 12-14% range....but a high K rate and lack of walks is going to hinder his landing in the pros. With Gattis shipped out, Christian gets his chance...but don't expect too much in his first full season.

Hou Castro, Jason The mid Teen HRs are nice but his distance on HRs and BBS is league average, so the tilt towards flyballs doesn't provide much fruit and his poor contact rate saps his RBI and BA production.

Pit Cervelli, Francisco Don't count on the .301 average posted last season in limited PT. Cervelli is not much with the stick as he strikes out much too often, which limits his opportunities...and there's not enough pop in his bat to get excited about.

Tex Chirinos, Robinson Chirinos moves up as the regular catcher to start the season for the Rangers, The 30 year old, and former career minor leaguer, has enough defensive skill and power to keep him in a potent lineup as the 6 or 7 hitter. He's not going to hit for average as both his GB/FB rate and 80% contact rate work against him, but he could drive in some runs in a historically weak position.

NYN d'Arnaud, Travis d'Arnaud come on very strong in the 2nd half with a .483 SLG. Will be the everyday catcher for the Mets in 2015 with lots of offensive upside. His contact rate is very good for a power/gap hitter, and that should translate into a fair amount of RBI opportunities. As a almost even GB/FB hitter with league average bat speed, he's going to hit his share of Jacks this season.

Hou Gattis, Evan The power is legit as he's consistently in the superior range on his BBS. Legit contender for a 30 HR season, who will drive in a lot of runs in the middle of the Astros order this year. Only concern is the BA which could fluxgates heavily as a flyball hitter with only a 73% contact rate. Can be everyday player with C eligibility if move to OF is successful.

Cle Gomes, Yan Dip in Contact rate was replaced with an increase in HR/FB rate (14%)...but that seems to be a little inflated base on league averages in distance and BBS.

LAN Grandal, Yasmani Grandal turned the corner in the second half with a 10% ISO, but his 75% contact rate and almost 1 to 1 GB to FB ratio is hurt by the field he plays in...this despite superior batted ball speed (104). On a positive note, his struggles against LHP will be sorted out.

LAA Iannetta, Chris A meager 74% contact rate with a heavy fly ball rate, hurt his BA, as his BBS is ordinary. At 32, not much progression is likely.

Mil Lucroy, Jonathan Look for the HRs to climb in 2015, as his 7% HR/FB rate was uncharacteristic. His solid 88% contact rate with minimal interference by his infield fly ball rate (7%) and solid 22% LD rate, makes LuCroy a legit .290-300 hitter with power. Rare find at the catchers position.

Tor Martin, Russell Martin cashed in on his bloated BABIP (336) which inflated his BA by about 60 points. Regression there, but move to hitters park, with above average BBS, will increase power numbers.

NYA McCann, Brian McCann turned it around in the 2nd half with his 14 HRs and 40 RBIs in 231 Abs, look for more of that in 2015 as he's fully vested in the hitters park known as Yankee stadium

Cin Mesoraco, Devin The expectation on Mesoraco came in full bloom last year, however his 21% HR/FB ratio is not sustainable with his 102.5 BBS...especially when you consider that he was averaging about 10% there previous 3 seasons. He'll pick up some Abs this season, but the rate numbers are going to drop as is his BA (he's a heavy flyball hitter with only a 72% contact rate. 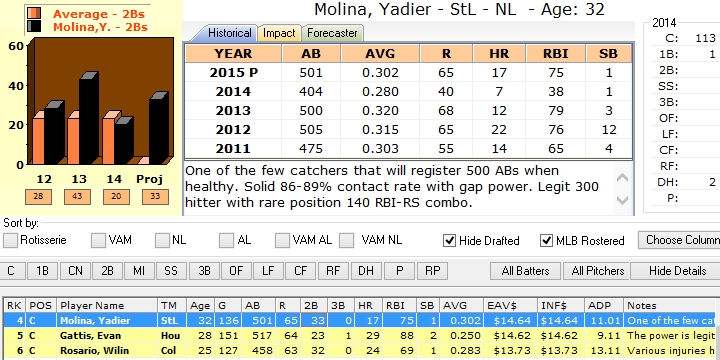 See all of the player projections and Fantasy Rankings customized for your league setup in the 2015 Fantistics Fantasy Baseball Software. Click here for Screenshots:

ChN Montero, Miguel Unlucky Singles% of .234 will revert upward in 2015, as will his average. Also a bump up in Runs scored is expected.

SD Norris, Derek There is upward mobility in his HRs as his HR?FB rate of only 9% should be closer to 12% based on his BBS. His BA from 2014 looks a little inflated based on his .324 BABIP, so some expected regression there.

KC Perez, Salvador There was a significant regression in his batting average, but that can be explained away by an unlucky .231 Singles%. A world of talent at the catchers position, could easily become a breakout player as he enters his prime years.

Atl Pierzynski, A.J. Bat Speed has been on a steady decline, as evidenced by the 4 MPH drop in batted ball speed on HRs since 2011. That said he'll likely pop back into double digits in the HR department. Not much more left here.

SF Posey, Buster Posey is a unique hitter than combines both a rock solid contact rate and a power stroke. A legit .300 hitter with 20+ HR potential, that would be 30+ if he played in another, more hitter friendly ballpark. Looking back to last year, it appears that both his RBI and Runs scored totals were discounted based on his peripherals.

Was Ramos, Wilson We finally saw some of Ramos' potential in the 2nd H of '14, when he hit 9 HRs and drove in 34 RBIs in 231 Abs. Ramos could become a fantasy darling, if and only if he starts to elevate his swing. His 2.41 GB/FB rate is considered extreme, and frankly unproductive. Ramos has excellent bat speed as evidenced by his 3 year 20% HR/FB rate. Lift the Ball and unlock your potential!

TB Rivera, Rene Riveria gets an opportunity to be a full time catcher in a better hitting environment, but how reasonable was his production from last season? Although his production was off the path of the journeyman he's been the last decade, his power numbers seem legit. His batted ball speed on HRs of 104.4 is top 25%, and fully supports his 12% HR/FB ratio....and as someone who is a heavy flyball hitter, the numbers are encouraging. That said his batting average is at risk, especially when we consider his poor 75% contact rate....so there is considerable risk.

Col Rosario, Wilin Various injuries hampered Rosario last season, and an odd upward shift in his GB/FB rate limited the amount of balls that had a chance to leave the yard. He's been averaging between 104 and 105 BBS on his HRs the last 4 years, which is in the top 10% of the league. Upward mobility projected.

Phi Ruiz, Carlos Ruiz continues to disappoint and is no longer a viable option in most fantasy formats. Other than what appears to be a fluky season in 2012, Ruiz hasn't shown any inclination of having above average offensive talent.

Mia Saltalamacchia, Jarrod Poor Contact rate in a pitcher ballpark limits most of his categories, that said there is some upward mobility in his BA and RBI count.

Min Suzuki, Kurt Solid 90% contact rate, but doesn't have the pop to have a league average FB rate. His .288 BA from last year was over inflated based on the .310 BABIP, look for a 20-40 point regression in BA and the RBIs appear to be inflated as well.

Bos Vazquez, Christian Not much HR power exhibited in the minors, but a decent 10 ISO....20% K rate is a concern...lots of growing pains and a sub par average expected.

Oak Vogt, Stephen Nice contact rate (88%), but heavy fly ball rate, makes him a risk to maintain his .280ish average from a season ago. Although he has league average speed on his batted balls, his heavy FB rate will propel him into the high teens to potentially 20ish HRs with/if regular playing time.

Bal Wieters, Matt Wieters is expected to be ready for spring training (elbow), and should once again be considered a top 3 at his position, however don't pay for his 308 BA in limited playing time from last season.

Sea Zunino, Mike Love the power numbers he posted but the 16% HR/FB ratio may be a little inflated based on his average distance 392 and BBS of 103.5, a drop into the 13-14% range is more likely. The bigger issue at hand is the lack of contact (66%) and the heavy FB rate .69 GB/FB rate keeps his BA in the danger range (.200-220), which of course hurts his other categories RS and RBI. Will need to improve before he can become a fantasy darling.