Evaluating the Sabermetrics Behind Relievers

Evaluating the Sabermetrics Behind Relievers

During the year, I write "A Closer Look" for our in-season analysis subscribers. It's a weekly column that takes Fantistics' advanced statistical perspective and applies it specifically to the closing position. I'm a firm believer that relievers can be an incredible source of value for you on draft day but as most of you already know, closers are also some of the hardest players to draft because of their high variation. The turnover at the closer position is unmatched at any other position in fantasy baseball and keeping up with each team's bullpen can make your head spin. To narrow down the list of target players, I like to look at a handful of different statistics that either directly affect the results on the field or serve as predictors for future performance. Those statistics are included in the table below along with the league average rate in 2014 and whether a higher or lower number is better (or worse) for the pitcher.

Strikeout Rate - along with walk rate, strikeout rate is one of the easiest to understand because it's familiar to anyone who has ever watched baseball. This statistic merely quantifies the percentage of plate appearances that result in a strikeout for the pitcher. Strikeouts are a staple statistic for most fantasy leagues so as this number rises, fantasy teams will experience a proportionate amount of extra value as well.

Walk Rate - Similar to strikeout rate, walk rate measures the percentage of plate appearances that result in a walk for the pitcher. While walks don't directly affect most fantasy leagues, a high walk rate means more runners will get on base (a higher WHIP) and a higher probability that those runners will score (a higher ERA).

Swinging Strike Rate - measures the percentage of swing and misses versus total pitches thrown. This statistic is one of the leading indicators for strikeout rate and can be quite telling when finding value at the relieving position. After all, the more swing and misses a pitcher can get, the easier it will be for him to punch out the batter.

Groundball Rate - Groundball rate is one of three different batted ball statistics that are tracked by Baseball Info Solutions. For me, I love to see late inning relievers with high groundball rates. A quick trip over to Fangraphs will give you the balls-in-play statistics for each type of batted ball (groundball, flyball, or linedrive).

As you can see, ground balls result in hits slightly more frequently than flyballs, but the type of hits do significantly less damage than both flyballs and line drives (lower ISO & wOBA). To tie this back into our closer discussion, when a pitcher allows more groundballs, that lowers his overall risk of giving up earned runs and/or blowing a save or eventually losing his job.

Contact Rate - Speaking of contact, contact rate is the measure of total pitches that contact was made divided by total swings by the batter. Contact rate is another good indicative stat that helps tell the whole story about the quality of a pitcher. While this stat is tied in closely with swinging strike rate and chase rate, it's another really good check to see how difficult it is for batters to make contact with a pitcher's offerings.

The ideal situation occurs when you have relievers that exceed the league average in each of the statistics mentioned above. While I agree there are other important statistics, I have found that if you chase the statistics above, you'll more frequently be rewarded with a successful closer. Several players exceeded the league average in each category during the 2014 season. They appear below:

It's no coincidence that each player on this list also went on to have a very successful seasons but you might be surprised that this list is missing some of the highest valued relievers on the board today (Kimbrel, Chapman, Holland, etc). Fast forward to the 2015 draft season and you can use this information as another weapon in your arsenal to find value. For example, the Rockies will go into the year with uninspiring LaTroy Hawkins as the incumbent closer. While the team did add John Axford this off-season, I'm predicting that Adam Ottavino would be given the first shot to close if Old Man Time finally catches up to Hawkins. Ottavino's latest NFBC ADP in our Fantistics software has him going in the 40th round. That means he's probably not even being drafted in your home league but could return substantial value by the end of the year.

If you subscribe to Fantistics Baseball Season Package, you'll gain access to loads of premium content such as weekly articles, our statistical database and our weekly lineup planner. As I mentioned in the opener, one of the premium columns is written by me and it's focused on closers and their handcuffs. Below is a sample of the type of analysis you'll receive from me in the weekly closer reports:

Zach Britton (BAL) - In 2014, Britton's 75.3% groundball rate was the second highest rate ever recorded since the stat's inception in the early 2000's. Making the transition from the starting rotation to the bullpen proved to be a successful endeavor for the Orioles' closer as he saw improvements to both his strikeout and walk rates while also seeing his average velocity jump up 3 MPH. Baltimore has led the league in save opportunities each of the last 2 years and finished 2nd in the league in 2012. The sheer number of save chances the Orioles' closer receives will make him an excellent value on draft day .

Sean Doolittle (OAK) - Doolittle's 89/8 strikeout-to-walk ratio led all relievers and was a big reason why he was so successful when he took over the closing role for the A's mid-season. His batted ball splits aren't ideal (59% flyball rate vs 23% groundball rate) but his great 37.7% strikeout rate limits base runners. He's still rehabbing from a partially torn rotator cuff injury but all reports have been positive and it's possible he won't miss more than a few weeks early in the season. He could prove to be a tremendous value at a deflated price.

Mark Melancon (PIT) - After taking over for Jason Grilli mid-season last year, Mark Melancon racked up 33 saves with a solid 25.6% strikeout rate and super solid 4% walk rate. Pittsburgh's closers have benefitted from the high number of close games the team plays in and Melancon will again be a valuable commodity in 2015 as the Pirates' young core continues to improve. Melancon's 57.4% groundball rate helps limit the damage of opposing batters.

Greg Holland (KC) - He might not be flashy but Greg Holland has now had back-to-back sub-2.00 ERA seasons with 93 total saves since 2013. Holland throws mostly a fastball and slider combination that resulted in a great 48.1% groundball rate in 2015. His high strikeout rate will again push him near the top of the closer rankings heading into this year's draft season.

If you haven't drafted yet, we're also offering a pretty incredible deal with DraftKings this spring. All you need to do is create an account on DK and deposit $30. Once you do that, you'll receive our Grand Slam Package for free. This bundle includes both our award winning Draft Projection Software and our Baseball Season Package (valued at $64.95). Check out the details here. 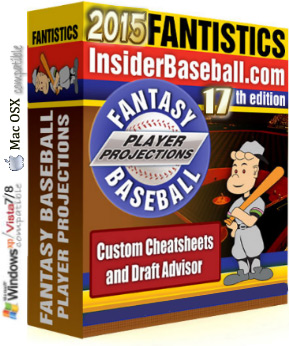