An EYE Towards 2016: Exploring a Hitter's BB:K Ratio

An EYE Towards 2016: Exploring a Hitter's BB:K Ratio

At Fantistics we love to look at a hitter's batted ball profile--the type of contact they are making--in order to project the trajectory of those surface statistics that matter in fantasy, such as batting average and home runs. After adding in batted ball speed data in recent years, we've now added hard hit rates and directional tendencies to increase the accuracy of our projections. When you're playing in a very competitive industry, every increase you can gain in probability is extremely important. Even though we've been above the 70% mark in predicting performance directions, we want more!

Underneath it all is a crucial foundational stat: contact rate. If a hitter isn't making contact and putting the ball in play, then there is no chance of the ball finding a gap between fielders or the glove of an enthused fan behind the outfield fences. And there is no chance for the batter to steal a base or score or knock in a run, stats that fantasy owners must have.

With league average contact rates hovering just below 79%, it's important to once again look at the statistic that boasts a high correlation with contact rate: BB:K ratio, or EYE. In 2015 EYE was correlated with contact rate at a mark of .47 (on a scale from -1 to 1). EYE is a useful proxy we can use for "neuroscouting" or, the ability of a hitter to command the strike zone and recognize pitches, and its relationship to contact rate is quite intuitive and powerful: if a pitcher knows he is facing a hitter who doesn't have a feel for the strike zone and who doesn't recognize spin very well, then he will likely refuse to give them a reasonable pitch to hit.

The league average EYE last season sat at .38. Among batters with at least 250 plate appearances in 2015 the average EYE was .45, and it is to those hitters we now turn for analysis to see what we can cull out for 2016. 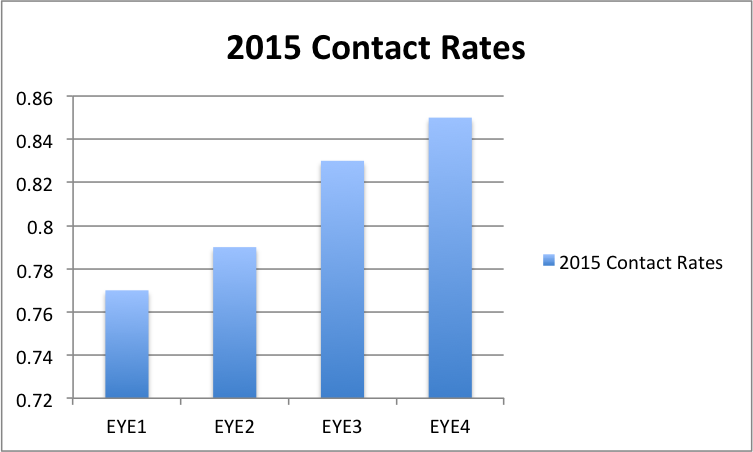 Once again, there is strong relationship between EYE and contact rates. A one standard deviation increase in EYE has between a 2% and 4% impact on contact rate, with the biggest jump occurring between EYE2 and EYE3. While outliers in each group persist, it appears as though a magical EYE mark is reached near .46, at which point gains in contact rate are magnified to a higher degree.

Let's take ten quick looks at players who elevated their BB:K rate from 2014 to 2015 and what it means, fantasy-wise, for this season.

Bryce Harper (OF-WAS): Harper elevated his eye from .37 to .95 and as a result, we saw his contact rate increase. However, the increase was only 2%, hinting that more may be in the tank as Harper continues to develop. He's a clear top-3 pick, and could make his case for the top overall pick if he can hit a few more balls in play. Fantistics Software Notes: 32% ISO last season....WOW! Among the league leaders with his 41% Hard Hit rate (as measured by Baseball Info Solutions) last season. That said his 42 HRs are going to be difficult to improve on as his 27% HR/FB rate seems excessive based on his 103.1 BBS on his HRs. Of course the 22% LD rate makes up for a lot of that. Additionally it's extremely difficult for a 75% contact rate and a .30 BA to co-exist, so some regression expected there. Still at only 23, this kid has some future ahead of him.

Manny Machado (3B-BAL): Moved his EYE from .29 to .63, but unlike Harper, saw his contact rate spike 6% from .78 to .84. Given that he may be maxed out here and that his BBS data are less than overwhelming, be careful with projecting significant growth. Fantistics Software Notes: Machado put on a massive power show in 2015, but how much of that is repeatable? True his BBS speed on HRs was slightly higher than average at 103.5, and was his hard hit %. However the 18% HR/FB rate is elevated and going to be difficult to repeat. What was depressed last year however was his RBI count, which could have been 15 more than it was. Lots and lots to love here at only 23 YO.

Justin Upton (OF-DET): JUP quietly increased his EYE from .35 to .43 even though his contact rate dipped slightly. There is a ton to like here with his moving to Detroit and that potent lineup. Entering his prime years, he looks primed to return elite value. Fantistics Software Notes: Upton will be well served leaving SD, as his HR/FB rate dropped from 18% to 15% last season. His bat speed is still among the elite. It's hard to believe that he's still only 28, and just entering his prime.

Eric Hosmer (1B-KC): We love Hosmer for 2016 and a big reason for that, in addition to his power potential, is the improvement his showed in EYE, which spiked from .38 to .56. Despite that jump, his contact rate actually declined by .2, hinting that more could be in the tank as Hosmer gains confidence with his power stroke and when to pick his spots. Fantistics Software Notes: Hosmer is on the verge of breaking out. Can easily become a 30+ HR guy, as his BBS on his HRs is top 5 (107). Still however he doesn't get enough balls into the air, his 2.1 to 1 GB to FB ratio is keeping his power muted. Still needs to overcome LHP (.395 SLG), before he becomes that legit 4 category stud.

David Peralta (OF-ARI): Peralta improved his EYE from .27 to .41, but his contact rate remained at 78%. We like him to continue his development this year with full-time AB's guaranteed, and if he can elevate his EYE past the magic number, we could see those counting stats increase as well. He's on the right path. Fantistics Software Notes: Heavy GB/FB rate makes him a legit 290-300 hitter. Both RBIs and RS we discounted last season, Was decent enough last season (.380 SLG against LHP) to be considered an everyday player in 2016. Legit HR/FB rate of 18% is supported by 104.5 BBS. Could surprise folks if he's able to get a little more lift on his swing.

Logan Forsythe (2B-TB): Forsythe isn't receiving much love in fantasy drafts this spring, and I'm not sure why. He upped his EYE from .35 past the magic number to .50. While his contact rate already stood at .84 before the adjustment, the increase in AB's he should see from batting leadoff will only aid the counting stats. Fantistics Software Notes: Forsythe is an interesting case of a hitter that came alive late in his career. He's always had above average batted ball speed, but what turned his career around was his ability to recognize pitches better than he had in the past. His contact rate is the same, but his ability to hit the ball harder more often appears to be the difference, as his Hard Hit rate jumped from 25% to 31% last season. That said his 323 BABIP is higher than it should be so they'll likely be some regression in the BA, but his RBI rate could increase.

Wil Myers (1B/OF-SD): Injuries and attitude have hampered Myers' development, but in limited time last season he did show an improved EYE (from .38 to .49). Sometimes it takes prospects who showed such cognitive ability in the minors time to adjust to major league pitching, and if Myers can stay on the field, this trend should continue. With his hard hit rate, the stats will follow. Fantistics Software Notes: Meyers 76% Contact rate and 1.3 GB:FB ratio leaves BA at risk, but his batted ball speed is in the superior range and his 33% Hard Hit range makes his BA serviceable, given his potential to hit HRs and drive in runs. Not in anyway a leadoff hitter, should move down into middle of lineup at some point.

Brad Miller (SS-TB): Another prospect like Myers who has struggled to replicate his MiLB EYE is Miller. Last season, however, he increased his mark to nearly .46 (up 11%), while the contact rate dipped slightly to .77. With a full-time job locked up in Tampa, look for him to continue his growth, vault past the magic number, and increase his contact rate to over .80. Fantistics Software Notes: Miller has maintained a consistent 14% ISO during his time in the bigs, and his 30% Hard Hit rate is better than most. A few years ago his batted ball speed on his HRs was in elite territory (105.5), but that dropped considerably last season to only 101.7. At only 25, consider this a short term blimp, there is room for upside in the HR department.

Denard Span (OF-SF): Span is nearly maxed out at contact rate, but if he continues with the improvements he showed in EYE (from .77 to .96) he should see plenty of stolen bases and run scoring opportunities hitting atop the Giants lineup. If you miss out on Ben Revere and need cheap speed later in drafts, Span is your man. Fantistics Software Notes: Span's 90% contact rate with 96% zone contact rate, heavy groundball ratio 2:1, makes him a legit 300 hitter. Decent walk rate (9%) also makes his runs scored attractive. Couple in the ability to steal between 20-30 bases, and we're looking at an undervalued player.

Jesse Winker (OF-CIN): Many minor league statistics can be misleading due to variation in environment and opponent quality, but one that has correlated highly with MLB success is EYE. Winker posted a mark of .89 at AA in 2015, and with injuries befalling the Reds OF, he could be in line for duty early in the season. As we noted above, sometimes that EYE can take some time to manifest itself and work its magic in the Majors, but Winker is destined for great things and is worth a pick later in drafts. Fantistics Software Notes:  Lots of profit here in a player that seemingly is developing some power to go along with his strong discipline, and his almost uncanny ability to get the fat part of the bat to the baseball anywhere it's pitched. Great raw power numbers last year in AA with 24 doubles and 13 HRs in 443 ABs. Almsot even EYE with only a 15% K rate.

Brandon Crawford (SS-SF): Last year we pegged Chris Carter as a guy to stay away from given his stagnating EYE and contact issues. This year that player may be Brandon Crawford, who witnessed his EYE drop from .46 to .33 while his contact rate stagnated at .76. Given his less than stellar batted-ball speed numbers and his home park, we envision Crawford struggling to return value. Fantistics Software Notes: Unfortunately the jump in HRs and power production is likely not sustainable. Consider that his 16% HR/FB ratio is coming from a hitter with good but average batted ball speed. Additionally his home park is one of the most difficult to hit HRs in.