In our continuing series on the Sabermetric analysis that shapes our Player projections in our 2017 Player Projections Software. Today we'll take a look at some of the indicators that are defining our 2017 catcher projections:

Gattis, Evan Heavy flyball hitter (1 to 1), with an above average 32% Hard Hit rate and 104 BBS on HRs. That said his 24% HR/FB rate is not consistent with his base skills, however he does pull most of his HRs, which tends to increase the rate %, but also opens him up to opposition tactics in the future. RBI count is in line, as most of his XBH are reflected in HR count. Regression likely in 2017.

Wieters, Matt Can be a top 10 offensive catcher if he stays healthy, but never seems to live up to his potential. Struggled last season against LHP with a meager .343 SLG, this has historically been a strength. On the + side his BA was suppressed by an unlucky .224 Singles %, which should revert back to norm in 2017

Castillo, Welington Above average power (14% HR/FB%) and elite hard hit rate 40%, makes him a sleeper. He can easily push the envelope beyond 20 HRs with 450 Abs this season.

Gomes, Yan 27% K rate and heavy FB rate .85 GB/FB %, doesn't leave much available for his BA. That said his BA was under represented as his .130 Singles% is going to level up by 100 points. Power potential is decent.

Hundley, Nick HR/FB rate increased last season from 10 to 12-13% based on contact off bat, and is sustainable. Batting average was lower than expected, as his Singles % was .228 last season. That will bounce back up as will his RBI count.

Perez, Salvador RBI count should have been slower to 77 last season, and Singles % was less than his norm. One of the best offensive catchers I in the league as he also gets 500+ Abs.

Grandal, Yasmani Grandal has a upper tier average bat speed as evidenced by his 412 average distance on his HRs with a 105 BBS, but the 25% HR/FB rate is inflated. Because of the sub par 74% contact rate, he has trouble maintaining a decent BA, but his superior 14% walk rate provides him with plenty of RS opportunities. BA should increase in 2017, but don't pay for the 2016 HR count.

d'Arnaud, Travis Last year was an injury marred season, now entering his prime age, he should start to ascend in 2017. Solid 85% contact rate should boost BA and overall production numbers. 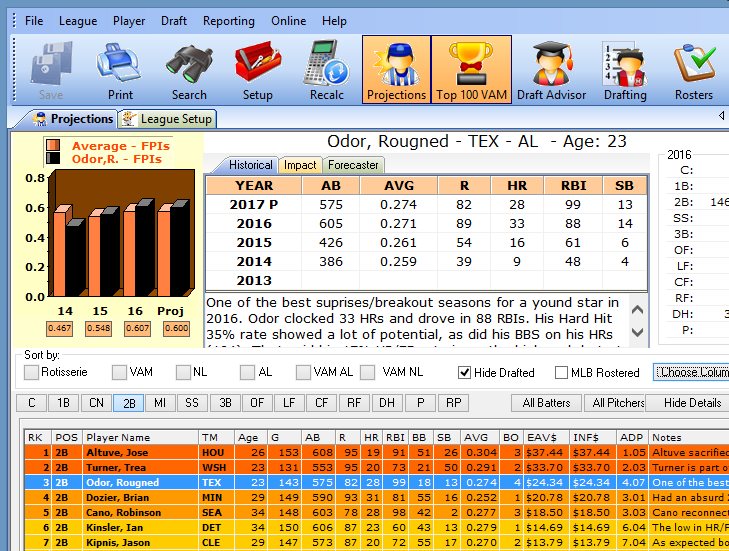 McCann, Brian Looking at his 2016 season, his 20 HRs were right in line with his 14% HR/FB rate and 36% hard hit rate, his RBI count should have been closer to 65 rather than 58, but the BA will dip if he can't maintain that higher than norm Hard Hit rate.

Sanchez, Gary 71% contact rate is a concern, but Sanchez showed superior bat speed last season with his 42% Hard Hit rate and 105.4 BBS on his HRs. His 40% HR/FB rate is of course not sustainable, but a 16-18% rate is. He takes walks, which offsets liability in BA and helps his ability to score runs. Minor League Analysis: A look at Gary's second level of stats says he surface stats all looks fairly solid, too. His .322 BABIP is a tailwind, but no more so than the .330 BABIP he posted in 132 ABs in his first tour of AAA last year. If I had access to his minor league hard contact%, I would guess it would largely support those BABIP rates. Gary's zone control and contact rates bear witness as well, and in fact in his second tour at the level he seems to acclimated nicely. All of the preceding, please notice, adds up to a .252 ISO.

Vogt, Stephen HR/FB rate dropped considerably in 2016 from 13% to 7%. Historically he's been closer to 8%. Solid contact hitter with 84%, and heavy GB/FB ratio of .65 makes him a decent BA candidate despite his less than desirable speed. His RBI% should go up versus last year as well.
Rupp, Cameron Has legit 20+ HR potential, and displayed a solid 11.1 XBH rate last season. K rate of 27% is a little concerning, but posts enough GBs to keep average from disaster territory. Still finding his way versus RHP, but destroys LHP (632 SLG). A step back in power production is possible as pitchers got the better of him in the 2nd half last year.

Norris, Derek Heavy FB hitter, who hit the ball well last season, squaring up on the ball 34% of time. Although Washington isn't a great HR park, it is better than Petco, which could provide a boost in his HR totals. Drop in Contact rate from 80 to 75 hurt his BA, but he should be in the 240-250 range, as his Singles % dropped 50 points, an indication of bad luck.

Zunino, Mike The good: Zunino continues to demonstrate above-average power, posting a 35% Hard Hit rate with a 104 SOB mark. The bad: his contact rate dipped to 65%. He was drafted in the 1st round by the M's for a reason, but the upper minors and the Majors have not been kind to his progression.

Posey, Buster Home ball park keep his HRs capped in the low 20s range, but superior contact rate of 87% (9% K rate), Higher than norm GB|FB rate of 1.6, and 36% hard hit percentage assures that he's a legit 290-300 hitter every season. The 520-550 Abs every season with production makes him the undisputable best catcher in fantasy. Has been healthy the last 5 years, but the injury factor is always a concern for catchers.

Martin, Russell Martin continues to post an elevated HR/FB rate, the 18% he posted in 2016 does not match his underlying peripherals, and was fueled by a 25% HR/FB rate in the 2nd half of 2016. Somewhere around 13-15% is where he should be. Additionally his RBI and RS count was on the high end of expectations.

Contreras, Willson Elite 105 BBS on HRs with 404 distance. Solid 32% Hard contact rate, but that doesn't correlate with 24% HR/FB rate. His 4% IFFB% is likely to increase which will lower the HR rate in 2017. His 71% contact rate is concerning, but the heavy 2:1 GB|FB rate will offset some of the potential damage to his BA, but its going to be variable.