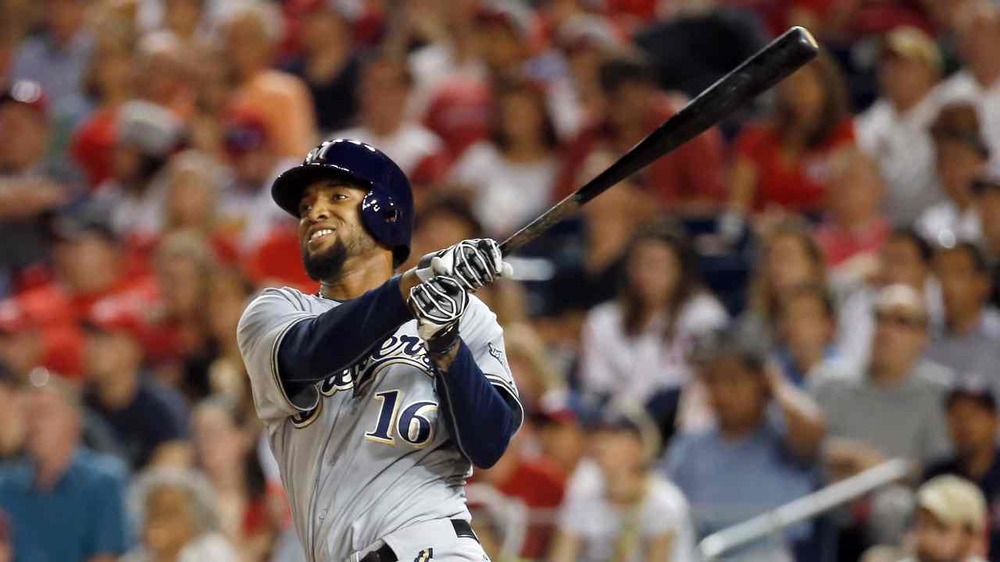 Hit the ball hard and good things happen! This article is a rehash of a successful article we posted in 2016, where we identified players that we speculated could see an increase in HRs. As I wrote in a recent article, the correlation last year between Hard Hit % and HR/FB rate was approximately +.66 (very correlated). In that article I identified players that had superior hard hit rates, but their HR/FB rates did not necessarily translate last season. Today we take it a step further and look at those players that 1. have higher than average Hard Hit Rates, and 2. have a higher than average GB/FB rate (tend to be ground ball hitters), and are less than 27 years old.  The premise: if these players can start elevating their swing more toward industry average, they could see a jump in home runs in 2017.

We know that hitters tend to elevate their swing as they mature, especially those hitters that are no longer in danger of losing playing time because of poor on base averages. Groundballs tend to have a higher likelihood of finding success, while flyballs have a higher likelihood of not (being caught). When hitters find themselves in the comfort zone of their career, they tend to take more chances on elevating their swing as extra base hits and homerun equate to increased production, which of course elevates a player's value.

Below is a list of players that have a heavy GB/FB rate of greater than 1.5 (1.3 is mean), and better than norm Hard Hit rate (>.31).  The list is strictly sorted by GB/FB rate, and we have sorted out the hitters who had an elevated HR/FB rate in 2016.

Avisail Garcia Heavy GB hitter, who hits missiles when he connects. Last season he averaged 107.1 BBS and a 416 distance on his 12 HRs. 25% K rate hurt his ability to get on base on score runs however. So although he might pop to 20+ HRs at some point, his BA, RS, and SB categories will not be fantasy appealing for most.

DJ LeMahieu Slugs almost 200 points higher at home. Turned it up a notch last season with an amazing .348 batting average! A combination of: 90% contact rate, heavy groundball splits 2.2:1, and a 35% Hard Hit rate were the main contributors. That said the .388 BABIP is not sustainable. We say a big increase in his XBH% (5.7 to 9.2), and could register a nice increase in HRs if he could lift his swing a little more in 2017.

Tim Anderson Mr. Anderson should maintain AVG thanks to high BABIP with batted ball profile and plus speed. Low walk rate will hurt counting stat opportunities, but has skills to go 15/25 with development.

Adam Eaton Solid contact hitter, with a little pop as well. Lock to score 90+ with OBP and steal 15 plus, now entering prime years. Increase in Hard Hit rate 32% and 104.3 BBS on HRs had little impact on 11% HR/FB rate, HR count could increase in 2017.

Willson Contreras Elite 105 BBS on HRs with 404 distance. Solid 32% Hard contact rate, but that doesn't correlate with 24% HR/FB rate. His 4% IFFB% is likely to increase which will lower the HR rate in 2017. His 71% contact rate is concerning, but the heavy 2:1 GB|FB rate will offset some of the potential damage to his BA, but its going to be variable.

Ryan Rua Solid 33% Hard Hit rate, with 105 BBS on HRs in limited activity. Could be a deep league surprise if he can maintain those hard hit rates and BBS. Elevated 13% Infield Fly ball rate will normalize in 2017, helping him in other areas.

Carlos Correa Carlos struggled against left-handed pitching in 2016 posting a 385 SLG, however that is likely to reverse itself in 2017 as Correa has shown the ability to hit left-handers well in the past. His 1.83 groundballs of Flyball ratio and 77% contact rate along with an 11% walk rate keeps is OBP in a very favorable place. This of course leads to additional run score opportunities. Last year's run scored count appears to be off by about 10. Carlos possesses an excellent hard-hit rate of 37% with a batted ball speed of 104.5 and 404 distance on his home runs. This makes his 17% HR/FB rate appear to be on the low and. At only 22 there's room for upside in 2017 and beyond.

Domingo Santana Domingo Santana is more of the traditional power prospect with plus raw power who seemingly will battle contact skill issues constantly as exemplified with his 32.4% K rate and .190 ISO. The good news is that he did improve on the contact rate slightly last season which does offer some hope for the future. His 39% hard Hit rate and 105 BBS on HRs is elite, and if he can continue to show progression, his 1.7 GB|FB rate is going to keep him in the lineup as his average and Walk rate (11%) is going to be palatable for everyday play.

Starling Marte Shifted his Heavy ground ball rate 2.4:1 to 1.7:1, and we saw a reduction in his overall HR numbers! As we've mentioned in the past he has an above average bat speed which makes him a legit 290 hitter. His 8% HR/FB rate was deflated based on his 104 BBS, so we should see a boost back in HRs in 2017. We should also see significant growth in RBI production (especially if he bats 4th) as his totals were a very muted last season.

Travis d'Arnaud Last year was an injury marred season, now entering his prime age, he should start to ascend in 2017. Solid 85% contact rate should boost BA and overall production numbers.  Elevated 19% Infield fly ball rate will normalize in 2017, helping him in all areas.

Brandon Drury Solid 80% contact rate for a power hitter with above average 1.70 GB|FB rate and 33% hard contact rate provides pop and BA. Lots to be excited about at only 24, despite not having a full time gig going in.

Corey Seager Seager lived up to our elevated projection for him in 2016. The one indicator that jumps out at us is his 40% Hard hit rate which is elite, as was his 20% ISO. All of his rates are repeatable, except the Runs Scored count may have been elevated by 10 in 2016. Also encouraging is his sub .20 K rate and 11% BB rate, one of the young rising fantasy studs in the game.

Tyler Naquin Posted a .341 wOBA against lefties last year and should see increased playing time in 2017. Carried a .411 BABIP, but above-average hard hit and walk rates will help to mitigate pending regression across the board.  We are projecting a modest 455 ABs from him this season.