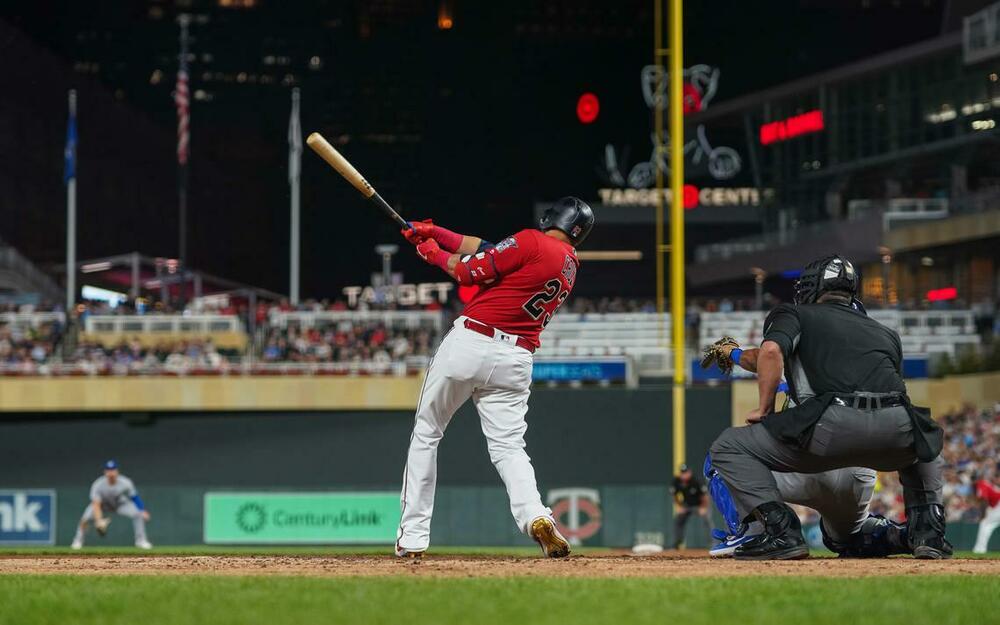 DJ Lemahieu was a major disappointment last year. He followed up his breakout 2019 in NYY with another strong year in 2020 but came crashing back to earth last year with a .268 AVG, 10 HR, 84 R, 57 RBI, and 4 SB. The power was due for regression but he failed to deliver in terms of batting average and counting stats. Looking underneath the hood points towards a bounceback for LeMahieu. He continues to have a plus approach (14% K and 11% BB) and his .301 BABIP from a year ago should bounce back considering his career .340 BABIP. The main issue for LeMahieu in 2021 was health. He dealt with injuries for most of the season which culminated with core muscle surgery. This was in October and the reports then were that he would be fully healthy for Spring Training. LeMahieu should bounce back to a high average with the counting stats to go along with it hitting a top of the Yankees lineup.

Willson Contreras and the Cubs are an interesting team to keep an eye on in Spring Training. They seemed to be tearing it down at the trade deadline but have been linked to some big-name free agents. This impacts Contreras in a number of ways. As it stands right now, he is one of their top trading chips because he is one of their best hitters. With the addition of the NL DH, Contreras has a good chance to see 500+ PA for the second time of his career. This is something that very few catchers outside of Sal Perez and J.T. Realmuto have the chance to do. Contreras hit .237 with 21 HR, 61 R, 57 RIB, and 5 SB last year. The uptick in power was supported by the above-average quality of contact (115 maxEV, 48% Hardhit%, and 11% Barrels). This makes Contreras a nice value in drafts given his playing time upside and the fact that he will hit in the middle of the Cubs lineup.

Anthony Rendon is one of the more intriguing players during draft season. On one hand, he is coming off an injury-plagued 2021 season. He experienced groin, knee, and hamstring injuries before the right hip injury that ended his season. The hip injury required surgery but he is expected to be healthy coming into 2022. This is something to keep a close eye on as we get a flood of news as Spring Training kicks off. A healthy Rendon hits for a plus average with good power in what should be a formidable top of the Angels lineup (Trout and Ohtani). He is a career .287 hitter with an above-average plate approach (16% K and 11% BB). If he is healthy, there is no reason that Rendon cannot return to form and be a tremendous value.

Jeremy Pena has a 454 ADP in NFBC drafts. Pena is either going to shoot up draft boards or completely fall off based on what the Astros do in free agency. It is looking more and more unlikely that Carlos Correa is brought back. Pena hit .287 with 10 HR, 22 R, 19 RBI, and 5 SB in 30 GP at Triple-A last year. The plate approach showed signs of concern (26% K and 5% BB) but the average power and ability to steal bases are very intriguing for fantasy. If he ends up getting the starting gig out of Spring Training he is definitely worth rostering given his upside. Finding speed upside towards the end of drafts is extremely difficult.

Tyler Mahle's name is constantly coming up in trade rumors as the Reds seem likely to move at least one if not two starters at some point this year. Mahle is coming off a very fine 2021 season. He had a 3.75 ERA, 1.23 WHIP, and 19% K-BB through 180 IP. Mahle showed increased strikeouts in 2020 (30% K) and backed that up in 2021 with 28% K. The biggest improvement came in his improved walk rate (8% BB). Mahle may not have the upside of an elite starter but his skill set is that of an above-average starter across the board. Betting on a trade outside of Cincinnati is unwise but getting out of Great American Ballpark would be a huge plus for Mahle. He has a career 5.09 ERA at home versus a 3.72 ERA on the road.

Andrelton Simmons has signed a one-year deal with the Cubs. Simmons doesn't have much fantasy value outside of very deep mixed and NL-only leagues. However, this has fantasy implications for the rest of the infielders (Nico Hoerner, Nick Madrigal, and David Bote). Coming into the season it looked like Nick Madrigal was the starting second baseman with Nico Hoerner playing shortstop. David Bote would bounce around the infield once he gets healthy from off-season surgery. Currently, it looks like Hoerner is going to be shifted into a utility role that could include playing in the outfield as well. This is a major blow to his fantasy value because Hoerner needs regular at-bats to accumulate stats because he does not have any one elite skill. Madrigal seems locked into playing time but he has a very difficult fantasy profile because he will provide value in stolen bases and average but everything else will end up hurting your team. The bottom line is that each of these Cubs infielders are not great fantasy options and the lack of clarity on playing time makes it easy to avoid them in drafts.

Yusei Kikuchi signed a three-year, $36 million deal with the Toronto Blue Jays. Kikuchi had a 4.41 ERA and 1.32 WHIP in 157 IP for the Mariners last year. He had a career-best strikeout rate (25% K) which was supported by a career-best swinging-strike rate (13%). His 4.16 SIERA suggests that he pitched better than his traditional ERA. He was hurt by the home run (1.55 HR/9) which is not likely to improve moving from Seattle to Toronto. Kikuchi is a solid late-round pick given his ability to miss bats and pitching behind the Blue Jays offense doesn't hurt. The area in which he is not likely to be an asset is WHIP due to his occasional struggles with control (9% BB) which is why he is going around pick #335 (NFBC ADP).

Isiah Kiner-Falefa was traded from the Rangers to the Twins. He will be penciled in as their starting shortstop with Jorge Polanco staying at second. Kiner-Falefa hit .271 with 8 HR, 74 R, 53 RBI, and 20 SB in 158 GP. The issue with Kiner-Falefa is that he is not a good major league hitter. His 85 wRC+ means that he was 15% worse than league-average last year. His batted quality is very poor (2% Barrels and 29% Hardhit). This is very worrisome for his long-term projection but the Twins have shown that they will run out average only guys (Arreaz and Austadillo). With a projected OPS under .700, it is more likely that he loses his job than returns anything close to a year ago. The steals may be enticing at the point he comes up in a draft but keep in mind he is a below-average major league hitter.

Mitch Garver was traded to the Texas Rangers. Garver has had trouble staying healthy at the major league level. He has eclipsed 100 GP just once in his career (103 GP) in 2018. Despite that, Garver has been an above-average hitter (122 wRC+) when healthy. He has a good plate approach (26% K and 11% BB) to go along with above-average power (.238 ISO). Garver should see every day playing time in Texas given their catching situation and need for productive major league hitters. The amount of value that he returns simply comes down to his health.

The Twins traded away C Mitch Garver in a deal with Texas to bring back SS Isiah Kiner-Falefa. This shows that they believe Jeffers can be an everyday catcher which is a nice boost to his fantasy value. A year ago he hit .199 with 14 HR, 28 R, 35 RBI, and 0 SB. He is not going to be an asset in batting average given his strikeout rate (37% K) but he does hit for power (.202 ISO, 15% Barrels, and 44% Hardhit). Jeffers played in just 85 games a year ago and we should expect that number to exceed 100+ GP which means he should exceed 20+ HR albeit with a low average.

White Sox manager Tony La Russa believes that RP Craig Kimbrel is going to be on the White Sox Opening Day roster. This can be taken with a grain of salt considering the source but any talk of Kimbrel remaining with the White Sox is not what fantasy owners want to hear. He is going right around pick #150 which is quite high for a non-closer but also way too low if Kimbrel were to get traded which is the prevailing thought. Kimbrel was dominant a year ago (2.26 ERA, 0.91 WHIP, and 33% K-BB). Despite the comments from La Russa, it is still likely the White Sox trade Kimbrel because it is hard to pay a non-closer $16 million a year.

Lucas Sims said that he is fully recovered from an elbow injury but that was only after Reds general manager said that Sims is a little bit behind due to "elbow stuff". This is starting to sound/look a lot like last year for Sims. He is being drafted as the Reds closer which is very risky because the Reds had ten different relievers get a save and had six guys with three or more saves. There is no guarantee that Sims is healthy to start the year and no guarantee that he is the closer. This makes him an easy avoid during draft season.

There are rumors that Nelson Cruz is going to sing with a National League team which is now not a problem thanks to the NL DH. Cruz continues to be an above-average hitter into his forties. He hit .265 with 32 HR, 79 R, 86 RBI, and 3 SB in 140 GP. His plate approach remained excellent (22% K and 9% BB) to go along with the above-average quality of contact (14% Barrels, 52% Hardhit%, and 118 maxEV). There isn't anything in his profile to suggest he is going to fall off a cliff other than his age but being a full-time DH helps.

Hunter Greene and Nick Lodolo are both options to start the year as the Reds fifth starter according to general manager Nick Krall. Both pitchers have fantasy upside and could be in the rotation by mid-season even if they don't make the team out of Spring Training. Greene has the triple-digit fastball and newly developed wipeout slider so he has the fantasy upside to match his name recognition. The two concerns for Greene are the development of a third pitch and the ability of major league hitters to hit his fastball despite its speed. There could be bumps along the way but the ceiling is there for the right-hander. He posted a 4.13 ERA, 1.29 WHIP, and 20% K-BB in 14 Triple-A Starts. Nick Lodolo is a left-hander that dominated Double-A a year ago (1.84 ERA, 0.91 WHIP, and 34% K-BB). He has a three-pitch mix that includes a sinker, slider, and changeup with good command. The slider is a true out pitch which should help him acclimate to majors as quickly as possible. Both pitchers are worth drafting especially in the draft and hold formats.