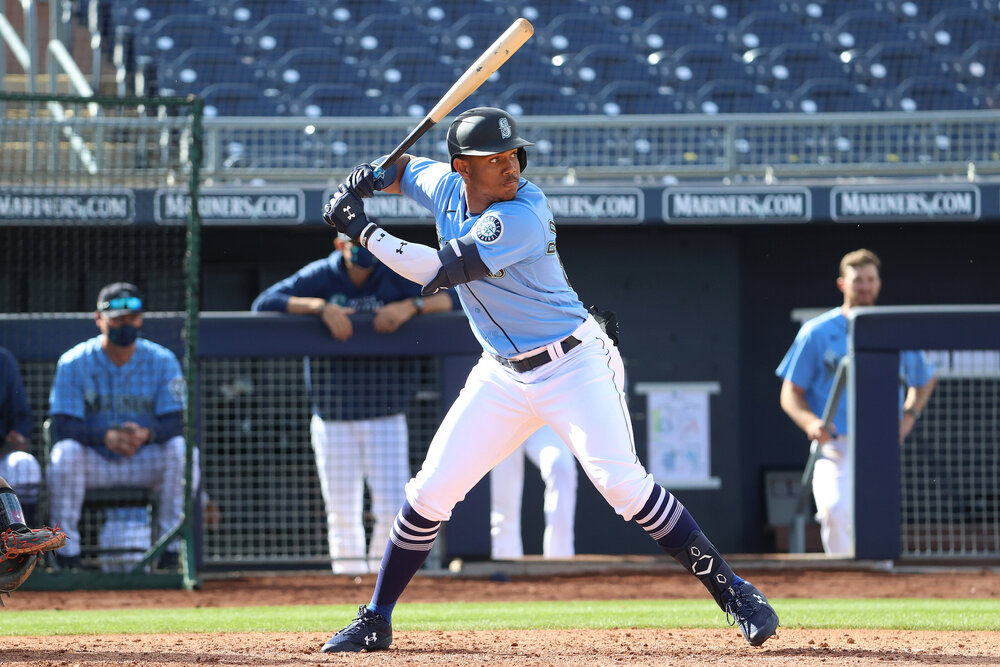 Edwin Rios, Los Angeles Dodgers - Edwin Rios is likely to begin the year with the Dodgers after Jake Lamb was reassigned to the minor league camp on Sunday. Rios' 2021 got off to a rough start after injuring his shoulder and then missing the majority of the season, only to appear in 25 games later in the year and hit just .078. Rios' calling card is his insane power potential and in the minor leagues he's also posted some impressive average numbers as well. However, even with making the team I have no clue where consistent at bats come from. The Dodgers are so loaded top to bottom I don't know where he'll get playing time, but he could spell Justin Turner at times at third and also get some occasional starts at DH since (thankfully) we have it in the NL now. He's performing very well this spring with a .389 average and three homers.

Jo Adell, Los Angeles Angels - Joe Maddon says that he wants to get Jo Adell around 450-500 at-bats this year and he currently has him penciled in as the everyday left fielder for the team. Adell is having a great spring slashing .273/.306/.636 with three homers and three steals. Obviously in the prospect world Adell is a household name, but his 2021 time in the majors went poorly with a .246 average and had four homers, but did post a solid 22.9% strikeout rate. He made contact at a strong rate, but with just a 31% hard-hit rate he didn't hit the ball hard consistently. His max exit velo though was 113.4 MPH, which slots him just outside of the top 10% in the league and the prior season his 115.5 MPH was had him inside that top 10%. Cutting down the strikeouts in the major was a great thing, but it also came at a bit of a cost with that contact not being strong and resulting in plenty of weakly hit balls.

Lance Lynn, Chicago White Sox - Lynn suffered a slight tear in a tendon near his knee and is slated to undergo surgery on Tuesday, a surgery that will sideline him for at least a month. The current timetable for him is going to be around four weeks before he's able to resume mound work. Considering the time it'll take to work up to full strength, Lynn is likely going to be out until at least late May and that could even back up into June without any setbacks. Reynaldo Lopez and Vince Velasquez are both in the mix for that final rotation spot that's now opened up for Chicago.

Kyle Wright, Atlanta Braves - Wright has locked down a spot in the Braves rotation and will open as the third starter for the team. Wright turned in a great outing on Monday tossing 4.1 innings in relief of Huascar Ynoa and struck out six batters while allowing two hits and one unearned run. Wright's time in the majors has been extremely rough, but after a dominant end to the season in AAA and an appearance in the World Series game 4 Wright has spoke many times about a rediscovered confidence heading into the season. Wright has the stuff and pedigree to be a solid major league arm, but in the majors he seems to come unraveled at any sort of trouble. He should get an extended look at the rotation for the Braves and is someone worth stashing in 15 team leagues for now, and we'll see how he does before expanding beyond that.

Julio Rodriguez, Seattle Mariners - Rodriguez continues to do everything needed to make the team, and it seems like it's all but announced that he's going to make the club out of the gate. Rodriguez homered again on Sunday, his third of the spring, on an opposite field laser to right center. For the spring, Rodriguez is hitting .419 with the three homers and three steals. Before the spring season, the Mariners didn't rule out Rodriguez making the opening day roster and if he shows them he's capable and goodness it seems like he's doing it. Seattle should compete for a playoff spot in the AL and it makes sense to have J-Rod with the team off the rip. He's right there with Bobby Witt and Spencer Torkelson in terms of stash worthiness and should be rostered everywhere when the announcement happens.

Zack Collins, Toronto Blue Jays - Zack Collins was dealt from the White Sox to the Blue Jays on Sunday after it became clear that Collins wasn't going to make the club in Chicago. However, Collins is absolutely buried on the catcher depth chart in Toronto. Danny Jansen and Alejandro Kirk are going to start at the major league level for the team and they have a top-25ish prospect in all of the minors at the position in Gabriel Moreno. Collins is probably just a org guy at this point as he's a career .195 hitter in the major leagues.

Luis Severino, New York Yankees - Luis Severino is doing well after tossing four shutout innings against the Braves on Saturday. Severino was going to start on Wednesday but the team opted for a bullpen session instead after he dealt with a bit of arm soreness, but they he struck out three batters over those four innings on just 57 pitches. This was Severino's last outing of the spring and he's slated to start the second game of the season for the Yankees on Saturday against Boston. He's expected to be capped around 80 pitches in that start. Severino was one of the top pitchers in baseball before suffering his elbow injury and after nearly a full MLB season worth of rehab he's ready to rejoin Gerrit Cole at the top of the rotation.

Josh Rojas, Arizona Diamondbacks - Josh Rojas suffered an oblique strain that's going to keep him out for a few weeks according to the team. Rojas was preparing to start on the Arizona infield in some capacity as he's been working at both shortstop and third base, but now it sounds like he's going to miss around the first month of the season. Sergio Alcantara and Drew Ellis would most likely be the top options to fill in for him but neither is worth rostering at this moment. Just wait and see before pulling the trigger on picking them up.

Kyle Higashioka, New York Yankees - Kyle Higshioka is having a monster spring that could make the Yankees look like geniuses from dealing Gary Sanchez to move forward with him behind the plate. Hiagshioka is up to seven homers in just nine games and has a 1.391 OPS. Last season for the Yankees he hit just .181 with 10 homers and 29 RBI but something is clicking at the plate this spring that makes him someone worth paying attention to once we roll over into the regular season.

Craig Kimbrel, Los Angeles Dodgers - Well Kimbrel's Dodger debut certainly could have gone better as he gave up four runs in an inning against the Giants. Kimbrel allowed each of the first four hitters to get base knocks against him and two of those were homeruns. I'm not stressing Kimbrel at this point as it would take a ton of fall off before he were to lose that job, and it would take these kind of outings in the regular season and not meaningless spring games.

Adley Rutchman, Baltimore Orioles - Rutschman has started hitting off the tee as he recovers from his tricep injury. Brandon Hyde has said that he's right where they want him to be in terms of his recovery and that it's just getting him up to full strength. Rutschman is likely going to head to AAA when the team breaks camp and he's someone we need to watch for regarding a midseason callup. He's the top catching prospect in the minors, and possibly the top prospect regardless of position. He'll be up at some point this season and getting him back healthy is the first step in that plan.

Mike Clevinger, San Diego Padres - Clevinger is dealing with a knee issues and he's likely going to begin the season on the IL. Clevinger is coming off of his Tommy John surgery and it's good news at least that the injury he's dealing with isn't related to his arm surgery. Bob Melvin says that the injury he suffered isn't something major and also may work towards Clevinger's advantage as it allows him to slow down and not have to rush back into the rotation for the team. He'll likely toss a rehab start or two in the minors before joining the Padres rotation going forward.

Andrew Vaughn, Chicago White Sox - Vaughn avoided any sort of serious injury after his dive in the outfield last week and returned to the lineup as the DN on Sunday. He's at least been cleared to hit at this point but it's likely going to be a bit of time before he's fully cleared to play the field. Vaughn needs to either play first base or DH but the White Sox likely are going to continue to fit a square peg in a round hole. Vaughn hit just .235 last year but hit 14 homers and posted a max exit velo in the 94th percentile. He can hit, the White Sox just need to let him be him.

Sean Manaea, San Diego Padres - Manaea was traded from the A's to the Padres on Sunday for a pair of players. Manaea has seemingly been in the rumor mill since the lockout ended and he finally found himself a new home. Manaea will slot right into the Padres rotation that includes a ton of arm talent in Yu Darvish, Joe Musgrove, and Blake Snell. While the park move should be relatively neutral for him, the upgrade in team around him should be a huge plus for his fantasy value.