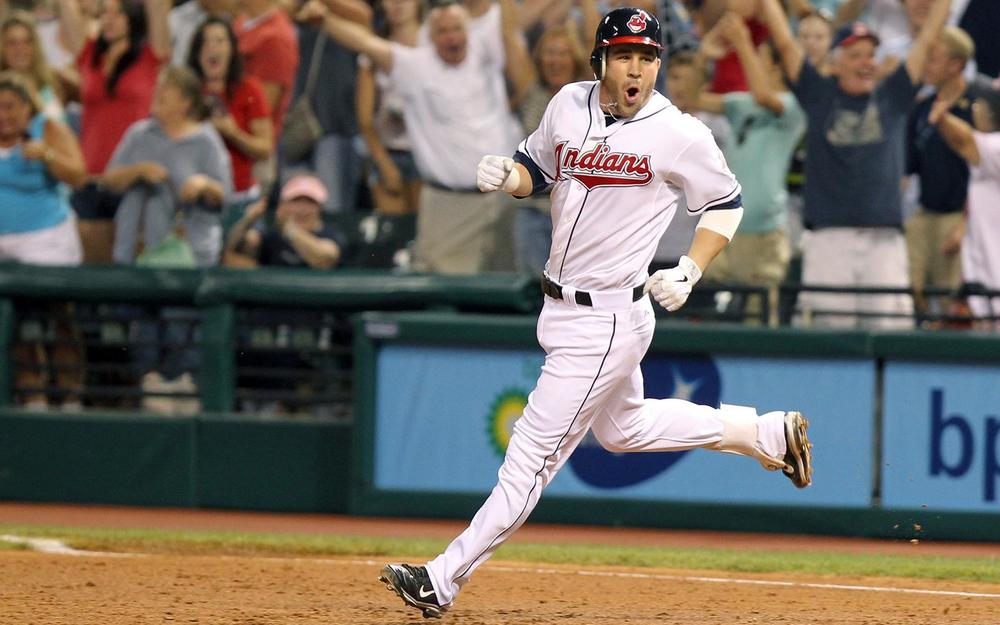 After a 2017 to forget in which Kipnis was limited to just 90 games and hit .232, followed by an offseason of trade rumors, Kipnis has had a torrid spring, hitting 6 HR's through the first two weeks of Spring Training. While it's never wise to look too deeply into spring numbers, it does seem that Kipnis is healthy right now and that his FB-heavy approach from last season is likely to carry into 2018. After a 9% increase in FB% from 2015 to 2016, his FB% increased another 7% last season to 44.1%, easily a career-high. If that trend continues, Kipnis has a good chance at challenging his career-high of 23 HR's. His BA should also bounce back this year as he suffered from a .256 BABIP in 2017. Part of the BABIP decline may have been a result of the increase in FB's, so it's likely that his BABIP will remain below his career .314 mark, but it should still improve somewhat, and a BA in the .260-.270 range seems like a reasonable projection. Kipnis has recorded double-digit SB's in each of his past five full seasons, and has surpassed 80 runs in four of those five, and with a spot near the top of the Indians lineup, there's no reason to think he can't repeat those numbers in a full season. With an ADP of 20th Round, Kipnis has an excellent chance at providing value if he remains healthy.

Mejia made a name for himself with his 50-game minor league hitting streak in 2016, a year in which he hit .342 with 44 XBH's including 11 HR's in 102 games across the A and A+ levels. He then slashed .297/.346/.490 with 14 HR's and a surprising 7 SB's in 92 AA games in 2017. His contact rate has actually slightly improved as he has climbed through the minors, and he cut his K% to 13.8% in AA last season. Mejia is slated to begin the 2018 season in the minors, with Roberto Perez and Yan Gomes handling the catching duties for the Tribe. But those two shouldn't block Mejia for long and there's a good chance he's getting regular at bats with the Tribe at some point this season. A catcher who can hit for a good average, has improving power, and perhaps can even add a few steals is worth keeping an eye on for when his day arrives.

After a 2017 that was shortened by an irregular heartbeat, it's good to see that V-Mart is looking strong this spring, having already smacked 3 HR's. Martinez is now 39 and there's definitely health risk, but he has also had two excellent offensive seasons in the past four. So does he have anything left in the tank? Well, first it's important to note that Martinez' always excellent K% has climbed to over 14.0% the past two seasons - still better than average, but not the elite marks he posted for most of his career- so it's unlikely that he'll revert back to hitting .300. Secondly, I wouldn't get overly excited about his career-high 39.9% Hard% as it seems that the Comerica Park data is skewed to produce high hard-hit rates, and while Martinez had a 49.7% Hard% at home, that mark was only 30.1% on the road. If V-Mart stays healthy, he could produce another .280, 20 HR season, which may be numbers worth rostering in fantasy, but that's about a best-case scenario.

Castellanos has had a hot start to the spring, going 9-24 with 4 HR's and a 3B through his first 10 games. He hit a career-high 26 HR's last season, and was on about the same pace in 2016 before breaking his hand in August. As mentioned with other Tigers players, one shouldn't read too much into Castellanos' sudden jump in Hard% as the data in Comerica Park seems to be a bit skewed, but he is still a relatively safe bet for 25 HR's or more. One should pay attention to his drop in K% which has dropped from over 24% from 2014-16 to 21.4% last season. Castellanos is one of the rare players who consistently hits for a high LD% (career 25.2%)and coupled with his improved K%, he should produce at least a decent BA. He isn't necessarily a huge value at his current #117 ADP, but he's also a pretty safe pick at that point.

After missing a start due to elbow soreness, Fulmer returned to strike out 5 in 3 IP against the Mets on Friday. Fulmer has been a success over his first two big-league seasons (3.45 ERA, 1.14 WHIP) and he's done it without a lot of strikeouts (6.23 K/9 last season.) He has survived with a low strikeout total thanks to a career .271 BABIP, but is that sustainable? While regression is likely, there are reasons to believe Fulmer can continue succeeding on some level as he has avoided hard contact, and his high GB% (49.2%) has resulted in a tidy 0.89 HR/9. Fulmer will probably continue to be a solid pitcher for the Tigers, but his fantasy value is limited due to his lack of strikeouts and the fact that the rebuilding Tigers might make it difficult for him to rack up wins.

While Soria is probably the favorite to earn saves out of the gate for the White Sox, the team has not officially named a closer yet and Nate Jones remains another candidate. Soria posted a 3.70 ERA for the Royals last season, but he was actually better than that as his 3.08 xFIP indicates. He posted a 10.29 K/9 thanks to a career-best 13.2% SwStr%, and also had a career-high 54.8% GB%, while allowing just 1 HR all season. Right now, Soria is owned in only 28% of ESPN leagues and 12% in Yahoo. I know, he's not guaranteed the closer job, but those numbers are way too low.

Jones is still in the mix to be the White Sox closer this season, along with the likely favorite Joakim Soria. Jones was one of the most dominant relievers in baseball in 2015-16 before missing nearly the entire 2017 with an elbow injury. During his last two full seasons, Jones produced a 10.74 K/9, 14.5% SwStr%, 2.51 ERA, and 2.87 xFIP. If he's healthy, he's probably the best pitcher in the White Sox bullpen, but he is coming off elbow surgery and Soria has more "closing experience", so Soria probably has the edge for saves right now. Nevertheless, Jones is currently unowned in nearly all fantasy leagues, and with excellent ratios and the potential for saves, he should probably be getting a bit more consideration.

Kopech, one of the top pitching prospects in baseball who came to the White Sox in the Chris Sale trade, had a rough start against the Royals on Thursday, allowing 5 ER's in 2.2 IP. Regardless of the poor outing, Kopech is not expected to break camp with the White Sox, but there is a very good chance we see him with the big-league club at some point this summer. His K% in the minors has been very good the past couple of seasons, but his BB% has been quite high. The walks will something to keep up as the season progresses, as a prospect of his stature has a chance to make a fantasy impact soon after arrival.

Davidson smashed 26 HR's in 2017, and he's off to a hot start this spring with 3 HR's, 6 XBH's and 15 RBI through 36 AB's. He is probably the frontrunner to start the season as the White Sox' third baseman and is likely to continue hitting for power as long as he's in the lineup, but that power doesn't necessarily make him a fantasy player. 25-30 HR's is useful, but not when it's almost guaranteed to cost you in several other categories. Davidson's ridiculous K% (37.2% in 2017) makes him a BA drain and his low OBP prevents him from scoring runs. He's not at all guaranteed to be a starter the entire season, but even if he was, there are other players with power that have a better chance at contributing (or at least not hurting you) elsewhere.

Lynn signed a one-year deal with the Twins on Saturday and it looks like he will be a part of the team's starting rotation this season. Despite a solid 3.43 ERA last season, Lynn had several key categories in which he set career-worst marks, including his 7.39 K/9, 3.77 BB/9, and 1.30 HR/9. Some of those numbers could revert back in 2018, as his 9.0 SwStr% is right in line with his career norm and his HR/FB skyrocketed to 14.2% despite a lower than average Hard% (29.2%). On the other hand, his .244 BABIP is bound to rise heavily (career .297) which is likely to lead to a rise in ERA as well. Moving to the American League is not going to help matters either. While I still think Lynn has a good chance at beating his 4.75 xFIP from last season, I wouldn't expect anything much below 4.00.

Arrieta has signed with a team at last, joining the Phillies on a 3-year deal. As mentioned in the past, Arrieta has declined a bit over the past two seasons, but owners should feel much more confident drafting him now that they know he will be pitching at or near the beginning of the season. In terms of how joining the Phillies affects Arrieta's fantasy value, it's good that he is staying in the NL, but not good in that the Phillies don't exactly have a favorable home park. He's probably a borderline top-25 SP option right now.

Cano injured his hamstring on Sunday and is scheduled for an MRI, but the injury is not believed to be serious at this point. Cano has been one of the most consistent hitters in baseball, having hit at least .280 with 75 runs and 75 RBI in each of the last 9 seasons. His HR total has jumped around bit and the 39 HR's in 2016 seem like a clear outlier, but he has still surpassed 20 HR's in 8 of the last 9 seasons. Which such a solid floor in so many categories, Cano seems like a solid choice at his current ADP of 73.3.

Faria continued his awful spring on Sunday allowing 5 runs, (4 ER's), 7 hits, and 2 BB's without a K in 1.2 IP. His spring totals now read 4.1 IP, 8 ER's 12 hits, 5 BB's 0 K's. Faria has been dominant in the minors in the past and was very good when he first came up with the Rays last season. But he also struggled at times, and a lot of that had to do with too many walks (4.31 BB/9 in 9 games after July 1). Faria has a chance to be consistently good some day but it doesn't look like we're there yet. You never want to read too much into spring stats, but the 0:5 K:BB rate is ugly, and the chances appear to be lit lower that Faria is ready to dominate out of the gate in 2018.

McCullers is off to a strong start this spring, allowing just 1 ER in 8.1 IP to go along with 10 K's. He has a chance for a true breakout season in 2018 if only he can stay healthy. After an excellent first half in 2017, McCullers fell apart in the 2nd half and finished with a mediocre 4.25 ERA, but even so, his xFIP was an excellent 3.17. He still finished with a 10.01 K/9 and an elite 61.3% GB% despite pitching through some injuries in the 2nd half. Right now, McCullers is going as the 32nd SP off the board (ADP 120.7) which carries a little bit of risk, but also has a great chance of being a huge bargain.